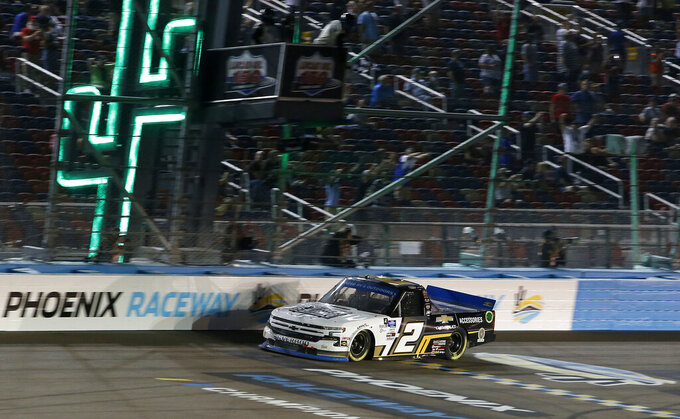 Moffitt was cruising to his second title in three years when a spin brought out a caution Friday night at Phoenix Raceway. Creed was one of 14 drivers to pit for fresh tires, restarted eighth and figured he'd watch Moffitt win the title for the team.

But Moffitt was a sitting duck as the leader on four old tires. He was passed immediately on the restart and faded all the way to 10th as the field cruised past.

Creed dashed to the lead right before taking the white flag and led the final overtime lap for the first Truck Series championship of his career.

“I pride myself on my restarts. We just needed a good restart right there,” Creed said. “I just went as hard as I could. I knew if I did, I'd have a shot.”

GMS Racing had Creed, Moffitt and rookie Zane Smith all in the four-driver finale and Creed helped Chevrolet open championship weekend with its first trophy. After being locked out of the Cup Series championship round since 2016, Chevy has strong contenders this year in all three of NASCAR's national series. Chase Elliott races Sunday for the Cup.

The race was atypically clean for the rowdy Truck Series, which has been a demolition derby during the playoffs. But the finale was trouble-free until Dawson Cram was spun to bring out the late caution and force extra laps.

Moffitt at least twice in his post-race comments was critical of race strategy and not pitting before overtime, a pointed shot at crew chief Chad Norris. Moffitt led a race-high 78 laps and finished 10th.

“I don't have much good to say. We finally hit the setup right and can't call a race to save our lives,” Moffitt fumed. “It's cost us multiple times this year and now it's cost us a championship.”

Moffitt broke both his legs in a moto bike crash the first weekend of NASCAR's shutdown during the pandemic and used the 10-week layoff to recover. He didn't miss a race and nearly won a second title in three years, but is likely losing his ride at GMS next week because of sponsorship.

Moffitt does not bring his own funding and his seat can be bought by another driver. Earlier this week he lamented the promise of landing a competitive ride in any series next season and thought winning the title would help.

He was admittedly in a foul mood after the race, one in which Moffitt honored seven-time NASCAR champion Jimmie Johnson with a tribute paint scheme.

“I don’t even know what I’m doing next year, so that’s that,” he said. "This year’s been hell on and off the racetrack. It’s been a tough year in my personal life with everything that happened. Having a bad year on track certainly doesn’t help that at all.

“Honestly, I’m just glad it’s over at this point.”

Grant Enfinger finished 13th in a Ford for ThorSport Racing. He was the only driver in the final four not representing GMS. ThorSport and GMS field a combined nine trucks in the series where young drivers are trying to launch a national-level NASCAR career.