Concerns about pit row linger as IndyCar revs up for May 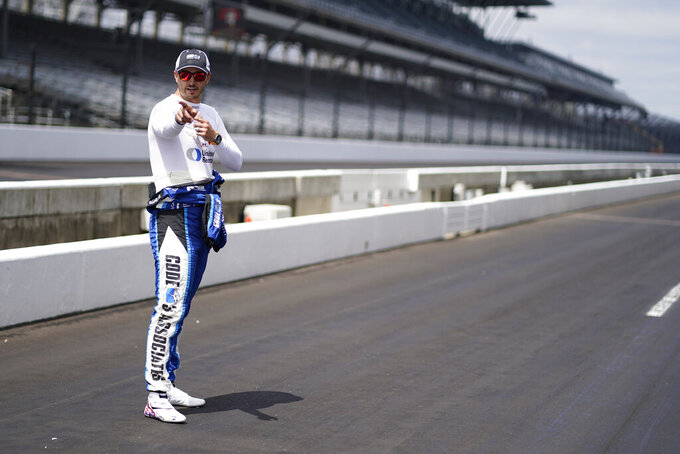 A few extra days should only help.

Yet, one lingering question loomed over IndyCar's biggest month as drivers started arriving at the historic track Thursday — will the slippery pit lane exit continue causing problems as it did during last month's testing?

“We'll see," the French driver said. “There certainly was a lot of concern when we were testing. But being around 10 years, I think they've taken care of a lot of things. But we've got to get on the track and see.”

Until then, Pagenaud and the other 26 drivers entered for this weekend's IndyCar Grand Prix will spend the next two days focused on May's other race Indianapolis. They'll run at slower speeds and in the opposite direction of the 500 on the track's 14-turn, 2.439-mile road course where the pit lane exit for oval racing will be the entrance to pit lane.

Qualifying is scheduled for Friday with the race set for Saturday.

Still, the pit concerns remained a hot topic around Gasoline Alley a little more than three weeks after three Indy winners — Alexander Rossi, Helio Castroneves and Will Power — spun on the track's apron between the first and second turns.

Rossi managed to avoid hitting the wall. Castroneves was not as fortunate, missing the second day of testing after he slammed hard into the outside wall. Power's spin forced emerging star Colton Herta to go high through the first turn and right into the wall.

Power's spin, the second in less than an hour, prompted series officials to end practice early and track officials to search for an overnight fix.

In April, speedway president Doug Boles said the problem appeared to be a lack of rubber in the warmup lanes after the entire track had been treated with Rapid Penetrating Emulsion last fall. The substance helps the track dry more quickly.

But it also caught some of IndyCar's most experienced drivers off-guard with Power explaining it felt like he was driving through water.

“It was just low grip," said two-time Indy winner Juan Pablo Montoya of Colombia. “When you do it all the time and you do it the same way all the time, it's a big surprise. I think there are still some big question marks.”

Since then, Boles said, the track continued its work by using friction tests, power washing and roller brushing pit lane, dragging more tires through the area and testing the apron with approximately 100 Firestone red tires.

Boles believes the extra work has improved the track.

“Basically, the power washing and the the roller brushes get anything off the top and then as you bring the tires on him, it continues to bring stuff off of it as well,” he said. “Then measuring the grip level each of those days to make sure we were going in the right direction.”

Boles isn't just busy getting the track in shape, either.

As golf carts and scooters drove around Gasoline Alley on an unseasonably warm, sunny day in Indianapolis, Boles presided over a ceremony to rename the first intersection inside the speedway's main gate Castroneves Drive. It had been previously been named Fourth Street and was done to honor the fourth driver to join the exclusive four-time winners club.

Race organizers also unveiled the 500 program, which includes a photo of Castroneves with his four winner's rings. It's the first time an active driver has been the cover feature and it brought the Brazilian to tears.

But the bigger question for Castroneves and the other 32 drivers attempting to qualify for the May 29 race is whether the track conditions will be better coming out of the pits.

“I haven't seen it but I know they worked really, really hard overnight at testing and then it was without issue on the second day," Chip Ganassi Racing managing director Mike Hull said. “So I expect it will be good and it will be a memory.”