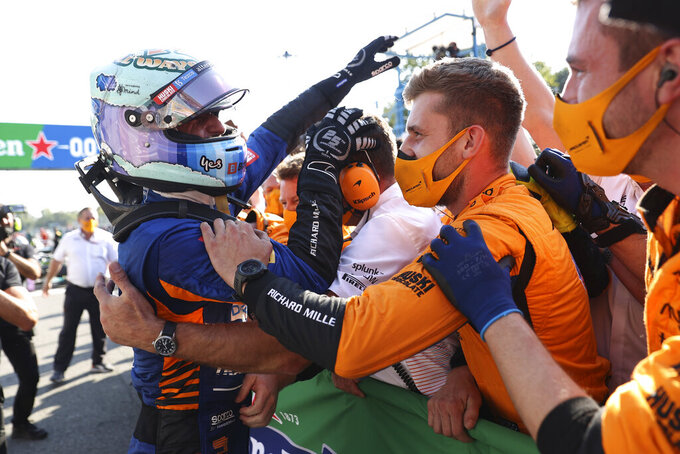 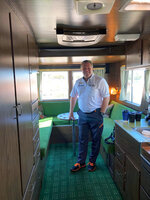 MONTEREY, Calif. (AP) — What does champagne taste like when chugged from a dirty shoe?

Zak Brown doesn't know the answer to the question he's been asked in the week since McLaren broke a nine-year Formula One losing streak with a 1-2 sweep in Italy. Daniel Ricciardo celebrates his victories with a “shoey” — using his racing boot as a champagne glass during the podium presentation.

Brown, the 49-year-old American in charge of McLaren Racing since 2018, was not going to miss a shoey. So he tilted his head back and let Ricciardo drain his boot into Brown's wide-open mouth as runner-up Lando Norris egged on the dousing of the boss.

“It was like being hit by a wave, and you are stuck under the wave, that's kind of what it felt like, and we were having so much fun. We were like three 12-year-olds up on a podium,” Brown said. “But what does champagne taste like out of a shoe? I don't remember. What I do remember is that it was definitely my proudest day in motor racing.”

Seven days after the McLaren breakthrough victory in the Italian Grand Prix, Brown was back in his native California to watch Pato O'Ward race for the IndyCar championship. His office at Laguna Seca was a 1972 Ford Condor RV perched above Turn 4, a shiny red McLaren GT parked outside the 28-foot Papaya Orange sleeper that Brown won in an online auction.

He used a proxy to grab this racing memorabilia — it had been McLaren's trackside support office in the 1970s — and fellow bidders on bringatrailer.com couldn't know the competition was the current McLaren CEO trying to reclaim a piece of team history.

He received the Condor in its original form, its wood-paneled walls, green upholstery and carpet and 1970s vibe untouched to this day. It's a source of great pride for Brown when he takes meetings sitting right where Bruce McLaren or James Hunt or Peter Revson had once been. When Brown hosted Roger Penske in the Condor at Indianapolis Motor Speedway, Penske remembered many of the features in the RV he'd visited decades earlier.

Brown sat with The Associated Press in the Condor ahead of Sunday's IndyCar race discussing his wild ride from wannabe racer to savvy motor sports executive and now the American who has crashed the stuffy F1 world with big expectations.

He took over McLaren with a five-year plan to return the team to a competitive level and Ricciardo's win is a year ahead of schedule. Brown at the same time was inching McLaren toward a return to the IndyCar Series after a 40-year absence.

McLaren's ultimate in was as a commercial partner with an existing team founded by Sam Schmidt. But in two seasons, the team has made tremendous growth and McLaren will be the majority owner of Arrow McLaren SP in November. The team will expand to three cars in 2023, with the third car to debut in the second half of next season. Brown is already looking at drivers and seems to be leaning toward a newcomer because he'd like someone available for at least five years.

With McLaren's fingerprints all over the IndyCar organization, a team that has never before challenged for a championship heads into Sunday's finale at Long Beach with O'Ward second in the standings. The 22-year-old Mexican will need a brilliant day to overtake 24-year-old Alex Palou of Spain, who drives for Brown's rival Chip Ganassi.

O'Ward seemed up for the challenge even after Palou padded his points lead at Laguna Seca. Palou and O'Ward ran 2-3 for a long stretch of the race but a late fade dropped O'Ward to fifth and he's 35 points behind the championship leader.

“I think I’m pretty handy around a street course,” O'Ward said. “All I can do is just send it in Long Beach.”

Brown loves that attitude. He loves O'Ward, and Ricciardo and Norris and Felix Rosenqvist and the entire McLaren racing family. He's emboldened his staff to take an edgier approach in marketing its stars and reaching for a younger demographic; when Brown was a child, he said, he couldn't get enough information about his heroes.

Brown and McLaren have been a big piece in F1 expanding its audience.

Brown tries to keep the mood light and piques his drivers with his deep toolbox of resources. He promised O'Ward a test in a Formula One car when he won his first race and it is scheduled for November; Ricciardo, a diehard fan of the late Dale Earnhardt, will get to drive Earnhardt's 1984 No. 3 Chevrolet Monte Carlo that just happens to be in Brown's collection.

The McLaren on-track gains are a high point for the entire organization, but it is another statistic that Brown chose to explain the McLaren atmosphere. Data released by Formula One, Brown said, showed McLaren is “the least disliked team, and we were in the top three liked teams."

“I’d love for everyone to have McLaren be their favorite team, but we can take not being disliked,” he said.

His style was forged on his climb from a broke aspiring driver crashing on couches to the slick salesman delivering eight-figure sponsorship deals to NASCAR teams. He is now an executive at the top levels of racing. Brown runs teams in six different series across the globe, still races in historical and vintage events, and spends about 50 weekends a year at a track.

His drivers — Ricciardo at 32 is the oldest but probably has the biggest personality — all find Brown relatable.

“He has a really good understanding of who I am as a driver and how I am, and he never says, ‘Do this or do that.' He lets me do my thing,” O'Ward said. “He's not just my boss, I really feel like he's a close friend to me. And I can talk to him like that, it's so different from how you'd normally be reserved with someone so high up the ladder.”

Brown's “number one ingredient” for creating a successful workplace is simple: fun. It's a requirement for working at McLaren.