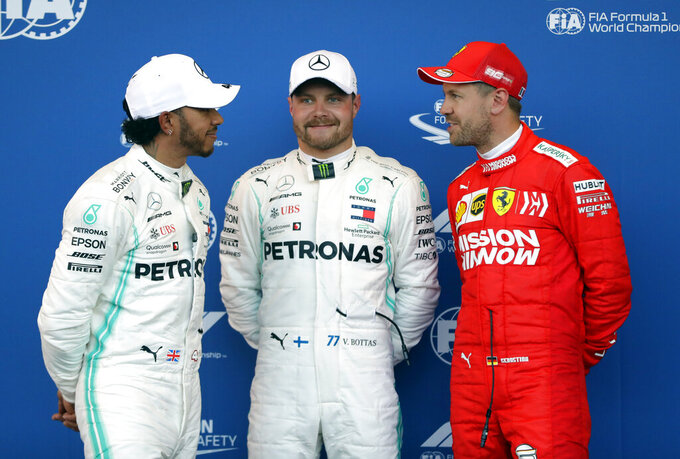 BAKU, Azerbaijan (AP) — Valtteri Bottas qualified in pole position for the Azerbaijan Grand Prix on Saturday after Charles Leclerc's crash instigated one of the longest qualifying sessions in recent years.

Bottas' last lap of the session was the best, 0.059 seconds ahead of teammate and championship leader Lewis Hamilton in a Mercedes 1-2.

Sebastian Vettel was third for Ferrari, 0.302 off Bottas.

Bottas showed great timing to get a slipstream down the long final straight.

"I got a good tow on the last lap," Bottas said. "It's all about fine details and I hit the sweet spot."

It was Bottas' second consecutive pole and the third time in four races Mercedes has locked out the front row.

Hamilton said their latest one-two was even sweeter because Ferrari and Red Bull upgraded their cars for Baku. "For us to lock out the front row in the circumstances, I'm really grateful for that."

No driver has won from pole in Baku since Nico Rosberg in 2016. Bottas nearly took victory last year from third on the grid, but a puncture forced him to retire and Hamilton won.

Leclerc had been fastest in all three practice sessions but crashed his Ferrari and qualified 10th.

It was another missed opportunity for Ferrari, which is desperate to make up ground after Mercedes began the season with one-two finishes in the first three races.

"Not happy from the team point of view because the pace looked really good in practice sessions and yet we find ourselves behind," said Vettel, who sits fourth in the standings, 31 points behind Hamilton and 25 off Bottas. "We're much more competitive but not yet there."

Leclerc's crash came on a track where he's had good fortune. The Monaco driver won his first points in Azerbaijan for Sauber last year and also won a Formula Two race here in 2017 shortly after the death of his father.

He was viciously critical of his mistake.

History in Baku shows Leclerc could still claim his first race win on Sunday. In 2017, Daniel Ricciardo hit the wall in qualifying and started 10th on the grid, but won thanks to skilled overtaking and rivals crashing.

Sergio Perez of Racing Point, the only driver to have finished on the podium in Azerbaijan twice, is fifth.

Robert Kubica's troubled comeback season for Williams continued as he qualified last and crashed at the same spot as Leclerc, a narrow section by the old city walls. The two incidents caused lengthy delays for barrier repairs.

Qualifying was scheduled for one hour but took nearly two, as long as many races.

It finished just under 40 minutes before sunset as the track cooled rapidly and the glare of the setting sun dazzled drivers in places.

Red Bull driver Pierre Gasly will start Sunday's race from the pit lane after he failed to stop for weighing when asked to do so on Friday. Gasly set the fastest time in the first session of qualifying.

Baku has a reputation for incident-packed races, and this week has been eventful already. On Friday, George Russell's Williams hit a loose drain cover in practice, wrecking the chassis. Then the truck carrying Russell's car hit a bridge and its damaged crane spewed fluid onto the stricken Williams.

Track staff went out with levers to check more than 300 other drain covers were properly secure.