Spanish GP: F1 will renegotiate fees for races without fans 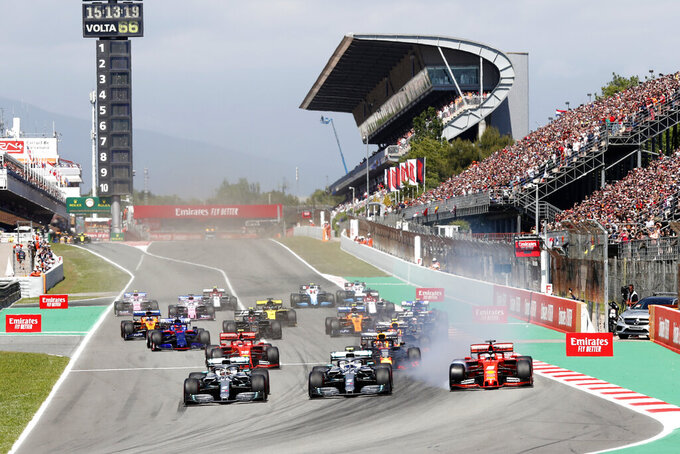 FILE - In this May 12, 2019 file photo, Mercedes driver Lewis Hamilton, left, of Britain leads the field after the start of the Spanish Formula One race at the Barcelona Catalunya racetrack in Montmelo, just outside Barcelona, Spain. Joan Fontsere, the general manager of the Circuit de Barcelona-Catalunya, says Formula One organizers are open to renegotiating hosting fees for races that may take place without fans this season because of the coronavirus pandemic. (AP Photo/Joan Monfort, File)

MADRID (AP) — Formula One organizers are open to renegotiating hosting fees for races that may take place without fans this season because of the coronavirus pandemic, the general manager of the Circuit de Barcelona-Catalunya said.

Joan Fontseré told The Associated Press that Liberty Media is “conscious” that if races need to go on without fans the contracts with event promoters will have to be somehow renegotiated.

He said Spanish Grand Prix organizers at this moment are not even considering a race with fans in Barcelona. He said it’s not only ticket sales that would be affected if the event goes on with empty stands and no hospitality suites.

“When the Catalan government invests in F1, it’s not only for the tickets that we sell, it’s also for the financial impact that the event has in the country, in Catalonia,” Fontseré said. “The economic impact for the country will be very reduced. It means no income for taxis, for hotels ... so that changes completely the agreement between the two parties.”

Liberty Media did not immediately respond to a request for comment.

The Spanish GP brings in more than 160 million euros ($173 million) to the region, with the total of its financial impact during the year nearing 300 million euros ($325 million), according to data from the track. The attendance for last year's race-weekend surpassed 160,000 people.

Fontseré said he received a couple of phone calls from F1 CEO Chase Carey to discuss possible solutions for the Spanish GP. He said Carey said the series is trying to run as many races as possible, but it was still too early to know when the season would actually resume, whether it would be in the summer or only in the fall.

Nine of the 22 races have already been postponed or canceled, and F1 recently put half of its staff on furlough until the end of May. Some teams also took similar actions to reduce costs.

F1 organizers have said they hope to hold between 15 and 18 races this year. The Australian GP and the Monaco GP have already been canceled.

Fontseré said the Spanish GP is “completely at the disposal” or organizers and is open to all proposals, be it doubleheaders, shortened weekends or almost anything else other than running on a reverse layout, as that would require too many complex changes to the track and could pose safety concerns.

Among the ideas reportedly being discussed in F1 is to have two or three consecutive races at the same circuit and to use fewer days of on-track activities. There were also talks about changing the format of qualifying and even races.

“We need to reduce two things: costs and risks,” Fontseré said. “So the fewer people we move, the smaller the risk, and the fewer days we use and the fewer activities we do, the lower the costs. It’s an exceptional season and exceptional decisions need to be taken.”

He said it is key to have as many races as possible this year in order to have a strong 2021 season, but he would understand if the Spanish GP was eventually left off the calendar. He was optimistic with its chances, though, considering its tradition, infrastructure and location.

Fontseré said he can get the Barcelona-Catalunya track ready for a race in “two to three weeks” and expects the Spanish GP to be among the first to resume.

“As soon as we can restart the season, I’m sure that it will be with European races," he said, "and we will be around there.”