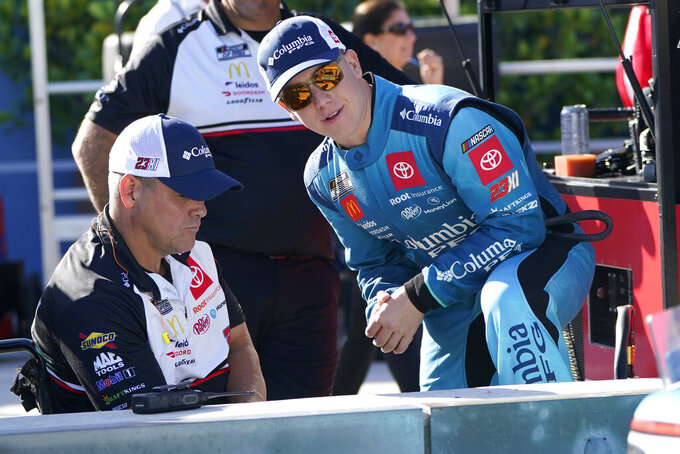 The drivers rounded out the championship-deciding final four on points. Majeski had claimed the first berth for ThorSport Racing with his first-career Truck Series win in Bristol last month.

“I feel like we've been one of the four strongest trucks throughout the back half of this season,” Majeski said. “I feel really good about where our team is at. We put a full-fledged effort in for this race, but our focus has been on Phoenix since we won Bristol.”

Zane Smith, the championship runner up the past two years, finished second.

“Third time’s the charm,” Smith said after the race. “I’ve pretty much figured out every way to lose one. Regardless of what happens in Phoenix, just an outstanding year, really.”

The finale will be on Nov. 4 at Phoenix Raceway.

Chandler Smith entered Saturday’s determining race with a 27-point cushion over Rhodes, the winner of last year’s championship, and a 12-point lead over Zane Smith

“We knew we had to have a solid truck to just not completely bank on points,” Smith said. “That being said, we’re focused on going to win a championship … I may never be able to do this again in my career.”

Rhodes, Majeski's ThorSport Racing teammate, made the cut Saturday by just one point over Stewart Friesen.

With eight laps to go, Rhodes was battling side by side with teammate Matt Crafton but pulled ahead for a sixth-place finish.

“I had a lot of work to do,” Rhodes said. "I just didn't know it was gonna be that tough."

Rhodes said he thinks Majeski is the “guy to beat” in the finale.

“We certainly have momentum on or side winning two of the last three,” Majeski said. “I can’t really say who the favorite is and who isn’t, but I really like my chances going to Phoenix."

Later Saturday at Homestead-Miami, drivers will continue battling for the three remaining spots in next month's Xfinity championship race.