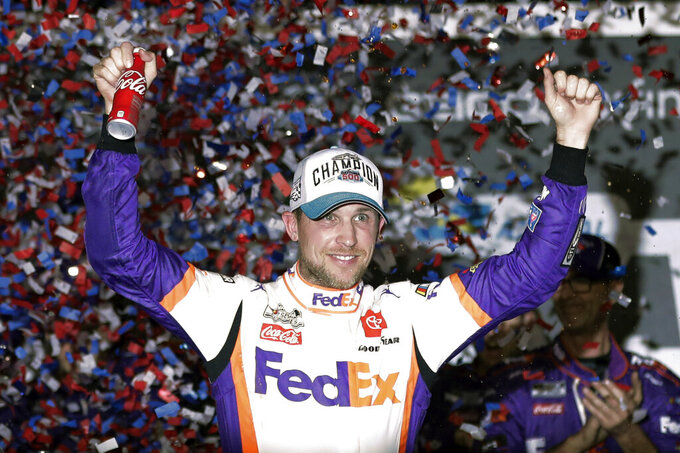 AVONDALE, Ariz. (AP) — NASCAR's semifinal race in Phoenix last fall was a bit of a snooze. The racing wasn't very compelling because it was so hard to pass, and it was a big reason the sport decided to shake up its rules package for short tracks in an effort to get a little more excitement.

Phoenix Raceway will be the testing ground for those changes Sunday. Veteran driver Clint Bowyer said it was hard to tell much difference during early runs in the desert, though he wouldn't be surprised if things change in a big way when the race begins.

“Who knows?” Bowyer said. “Maybe there will be some more chaos.”

A little more drama would be a welcome development at the mile Phoenix Raceway that also will host the championship-deciding race in November.

The rules package introduced last season was altered during the off-season when NASCAR made changes to the specifications for short tracks, including a significantly smaller rear spoiler for the cars. NASCAR said the changes mirror similar rules that were used during the 2017 and 2018 seasons. Phoenix is the first stop on the schedule affected by the changes and drivers are interested to see the changes that result.

Chase Elliott and his No. 9 Chevrolet have the pole position. He'll start alongside Kevin Harvick's Ford. Harvick has nine wins in Phoenix.

Daytona 500 winner Denny Hamlin — who qualified third in a Toyota — said drivers who tried the smaller spoiler in simulators said it's a big adjustment.

“I think the guys that run good or win this weekend are either going to have a setup that they hit on that is really good or they acclimated quicker to this package back to where we were,” Hamlin said.

Hamlin is trying to win his second straight race in Phoenix. His win last year race vaulted him into the championship round in Homestead, though the title was won by Kyle Busch.

Hamlin is one of the best current drivers to not win a Cup series championship even though he was close in 2010, 2014 and last season. He's off to a good start once again after his Daytona win and a sixth-place finish last week in Fontana.

“I think that the championship is an easy goal that anyone just throws out – win a championship — but that comes down to one race,” Hamlin said. “If you can win a significant amount of races, it shows a bigger picture of your full year.”

Part of earning consistent success this year will be mastering Sunday's new rules package, which affects nine of the schedule's 24 tracks. Bowyer said the changes will be hard to simulate until everyone's on the track fighting for the same position.

“When we line them up and fan out on restarts, you're going to see a different thing," Bowyer said. "You're not just going to be able to drive that thing in there three-or four-wide comfortably like we could with all that downforce.”

Alex Bowman is coming off his second Cup Series win last week after holding off Kurt and Kyle Busch in Fontana.

It was a big win for the 27-year-old, who hasn't had a ton of success in 156 career starts and is in the last year of his contract with Hendrick Motorsports. The Arizona native would love to keep the momentum close to home and things are certainly trending in the right direction.

Bowman wasn't sure if the win would help expedite contract negotiations for 2021 and beyond.

“I hope so,” Bowman said. “Hopefully we'll get on that soon and not have to worry about it anymore.”

Veteran Jimmie Johnson's on a roll heading into Phoenix Raceway.

The seven-time Cup Series champion is coming off two straight top-10 finishes, including a fifth-place run in Las Vegas and a seventh last week in Fontana.

Johnson has already announced that this will be his last season of full-time racing in NASCAR. The 44-year-old hasn't won a Cup Series race since 2017.

Current NASCAR points leader Ryan Blaney will be racing for the first time since agreeing to a multiyear extension with Team Penske on Friday.

Blaney has three career wins and has qualified for the Cup playoffs three times. He finished in second place at this year's Daytona 500.

“We have fired off really good but you have to keep your cars up to date and keep them fast,” Blaney said. “It will be interesting to see where we stack up with everybody with this low downforce package.”