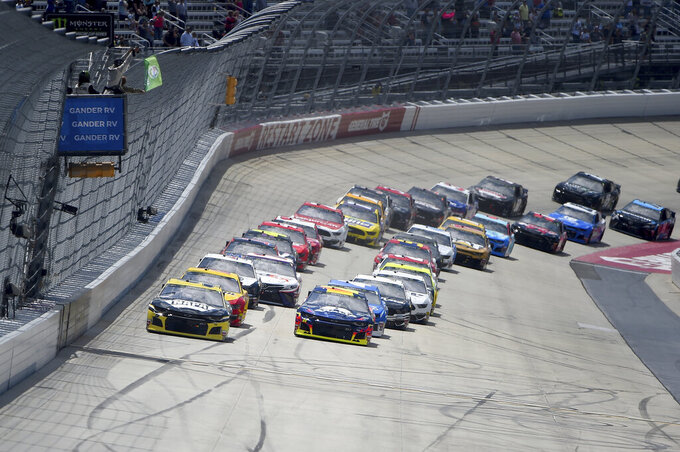 Truex won his first career NASCAR Cup race on June 4, 2007, at Dover and 12 years later used another Sunday rainout to do it again. Truex, the 2017 Cup champion, won at Richmond three weeks ago and is getting hot in the No. 19 Toyota for Joe Gibbs Racing.

Alex Bowman finished second for the second straight week in the No. 88 Chevrolet. Kyle Larson, Kevin Harvick and Chase Elliott, last week's winner at Talladega, rounded out the top five.

JGR has seven wins in 11 races this season and has established itself as the team to beat. Truex, of Mayetta, New Jersey, has long considered Dover his home track and he crushed Bowman by 9.5 seconds after starting in the back of the field because of inspection issues.

Martin Truex Jr. has won the second stage of the NASCAR Cup race at Dover International Speedway. Truex won Dover's last Monday race in 2007 and entered the final stage on pace to do it again 12 years later.

Joey Logano, the reigning NASCAR champion, has won the first stage of the Cup race at Dover International Speedway.

Logano won his fifth stage of the season in a relatively clean start to the first Monday race at Dover since 2007. Logano matched Kyle Busch for most stage wins this season.

The NASCAR Cup race at Dover International Speedway is underway after a rainout forced the first Monday race of the season.

Chase Elliott, last week's winner at Talladega, won the pole and led the field to green in Dover's first Monday race since 2007.

Elliott topped the speed chart on a blistering qualifying session Friday and set a track record when he hit 165.960 mph. Elliott and William Byron made it a 1-2 front row for Hendrick Motorsports. The 23-year-old Elliott became the youngest pole winner at Dover.

Jimmie Johnson holds the Dover record with 11 victories. He topped the final practice Saturday with a fast lap of 161.863 mph in the No. 48 Chevrolet. The seven-time NASCAR champion is mired in the longest losing streak of his career dating to his June 4, 2017, victory at Dover.

Sunday's scheduled race never officially started. Cars were pulled from the track after a few pace laps because of the rain.