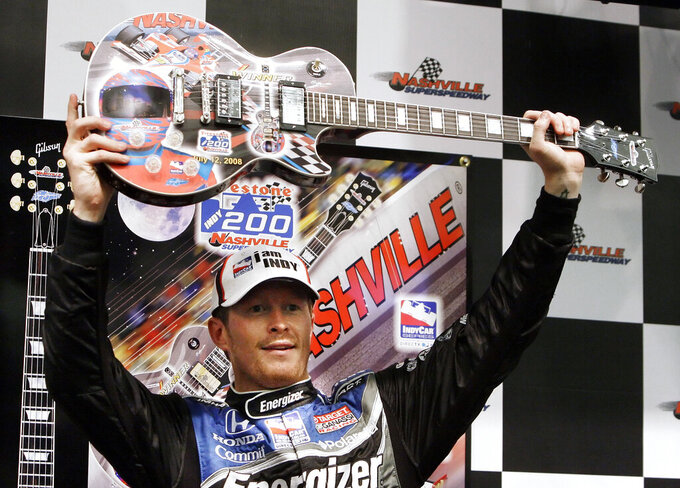 NASHVILLE, Tenn. (AP) — Honky tonk honk if you love racing! There’s a new sound of this musical city that drowns out the country tunes at the Grand Ole Opry and the cacophony coming from bands playing at every bar — and the party people hanging from the rafters — as you walk down Broadway.

Nashville is now a start-your-engines kind of town.

If you race them — stock cars, IndyCars, trucks and more — fans will come in bunches and have turned the Music City and its surrounding areas into a place fit for racing. Long forgotten by major racing series, Nashville has found a second life as a vibrant checkered flag hotspot and, much like the city itself, blossomed into the life of the party.

It’s the kind of week that brings a Bachelor, a seven-time NASCAR champion and a former Mouseketeer together at the home of honky tonk and hot chicken for a packed week of motorsports.

The main event, of course, is the IndyCar Music City Grand Prix on Sunday that zips through downtown streets past an NFL stadium, over the Cumberland River and stands as much as a summer food and music festival as another race on the schedule.

Tennessee Titans QB Ryan Tannehill got a heads-up on what’s ahead from friend and 2014 Indy 500 winner Ryan Hunter-Reay.

“We look forward to bringing our sport right to your front doorstep,” Hunter-Reay said.

The course stretches 2.17 miles and 11 turns past city landmarks Nissan Stadium and the Korean Veterans Memorial Bridge and city officials expected around 150,000 people to attend the three-day event that starts with Friday’s practice.

“Nashville is going to join Monaco in the absolute top tier of auto racing across the globe,” IndyCar President Mark Miles said Thursday at the Country Music Hall of Fame.

Josef Newgarden, the two-time IndyCar champion, was raised about 25 miles north of Nashville in Hendersonville, Tennessee, and has served as de facto series spokesman for the Grand Prix. Newgarden spent the weeks leading up to the race hustling from one promotional event to the next.

The sell job was easy.

“Most of the partners on all the teams have been eying Nashville as a destination,” Newgarden said. “Outside of the Indy 500, that’s probably been the No. 1 spot everyone wants to visit.”

And what’s a bash without a few celebrities?

“Even in a global pandemic, Nashville knew there were brighter days ahead,” Nashville Mayor John Cooper said Thursday. “There's no better way to celebrate as we rebound from the pandemic, more slowly than we would wish.”

The IndyCar appetizers include NASCAR team owner Justin Marks, who plans to move his Trackhouse Racing headquarters to the Music City by 2023, and his driver Daniel Suarez in Saturday’s Trans Am race. Former “Bachelor” Arie Luyendyk Jr. races in the Super Truck Series owned by former IndyCar and NASCAR driver Robby Gordon.

There was a Grand Prix fan festival Thursday night with autograph signings, a pedal car race for kids, and race cars on display from various series. The famed Ryman Auditorium is hosting a watch party Sunday complete with food trucks, live music, drinks and prizes.

“A good indicator for me is that people who don’t even necessarily tune into motorsports, when those people are very interested and excited about the event, I think it bodes well for the overall health,” Newgarden said. “I know we’re going to have a ton of motorsports fans that are interested, but to get the general population on board with it too, I think is a real big win.”

NASCAR kicked off the major race slate when Nashville Superspeedway reopened after a 10-year slumber and drew a sold-out crowd of roughly 40,000 fans to the event held about 35 miles outside city limits. The Cup Series had not raced in the Nashville area since 1984 when the last premier series event was held at Nashville Fairgrounds Speedway.

Tony Stewart brought his Superstar Racing Experience last month to a packed house of roughly 15,000 fans at the Fairgrounds and found a raucous response in the stands — and on the grid.

NASCAR champion Chase Elliott, who made a spot start for SRX in Nashville, pushed for the Cup series to add a race to the Fairgrounds.

“That other track is not the answer,” Elliott said. “The energy is right there in town, and we don’t need to search any further. That’s it for that city. No doubt.”

Elliott has a soft spot for Nashville, driving there in late model races in his formative years, and said racing on courses close to or through city streets makes sense more than at tracks struggling to attract fans in remote locations.

“We’re never going to build a racetrack that close to a city, which I think is a disconnect for the sport in general compared to other sports,” Elliott said. “You go to a football game or a baseball game, and you’re right in the city. Racing, we can’t do that. Well, we have one in a downtown area that’s there and has been there for years and years and years.”

The Fairgrounds could host a NASCAR race as soon as 2023.

“There’s nothing better than music and cars,” said Jimmie Johnson, the NASCAR champ-turned-IndyCar rookie. “I think the market really supports all forms of motorsports, and I think a race downtown is going to be very special for the fans and for IndyCar.”

Can the race live up to the hype and find a permanent home on the IndyCar schedule?

The Grand Prix of Long Beach set the gold standard for IndyCar’s street races and St. Petersburg has traditionally served as the season opener (though the pandemic spoiled that this year). The Detroit Grand Prix doubleheader is a staple and Toronto (off the schedule because of the pandemic) has long a been favorite.

But races in Baltimore and Houston flamed out for financial reasons and the Grand Prix of Boston never got off the ground and became entangled in court.

The Music City Grand Prix is the first new street course race added to the schedule in 10 years and has a three-year deal with IndyCar (the Titans are the landlord). Nashville is a big event market — the city hosted the Cup Series annual awards ceremony in 2019 — and survived through the years of road closures, construction and other headaches that can derail the longevity of events.

August is one of Nashville's slowest months for live entertainment and officials expect IndyCar to boost the bottom line.

“My optimism is sky high for not only just this first year, but for creating a new street course environment for the IndyCar Series that can thrive for hopefully for 50 years,” Newgarden said.