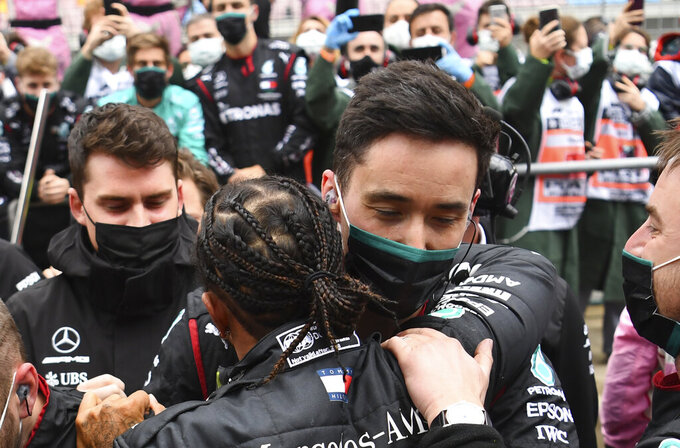 Mercedes driver Lewis Hamilton of Britain celebrates with his team after winning the Turkish Formula One Grand Prix at the Istanbul Park circuit racetrack in Istanbul, Sunday, Nov. 15, 2020. (Clive Mason/Pool via AP) 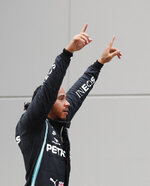 After winning a difficult race to equal Michael Schumacher's record of seven Formula One championships on Sunday, the hardest thing for Lewis Hamilton was containing his emotions.

His voice could be heard breaking as he thanked his team over the radio moments after crossing the line at the Turkish Grand Prix, while underneath the helmet the tears were starting to build up.

“All these emotions were running through me and I was trying to stop it,” Hamilton said in his post-race news conference. “I was thinking about my whole career, from when I was five when I drove in a go-kart, from when we won the British championship, driving home with my dad and singing ‘We Are The Champions' and dreaming of being here.”

Moments after victory No. 94 and title No. 7, he sat in his car with his head in his hands.

“It really hit me and I just burst into tears. I couldn't get out of the car because I just couldn't believe it," Hamilton said. ”I didn't want the visor to come up and people to see tears flowing, because I had always said I would never let you see me cry. I remember watching drivers in the past crying and I was like ‘I’m not going to do that.' But it was too much."

Speaking a short time after his win, Hamilton was wiping away those tears as he prepared to mount the podium.

“I’m definitely a bit lost for words,” he said, thanking his family. “I dreamed of this as a kid. This is way, way beyond our dreams.”

Hamilton only had one title, with McLaren in 2008, when he replaced Schumacher at Mercedes in 2013.

Hamilton only needed to finish ahead of his teammate Valtteri Bottas to seal his sixth title for Mercedes, and Bottas placed a lowly 14th after making a poor start.

The British driver started from sixth place but still won a fourth straight race and 10th of another hugely dominant season.

“I know I often I say it is beyond wildest dreams but my whole life secretly I have dreamt as high as this,” said Hamilton. “It felt so far-fetched. I remember watching Michael win those world championships. To get one or two or even three is so hard.

“Seven is unimaginable. There is no end to what we can do together, me and this team.”

Hamilton placed about 30 seconds ahead of Racing Point's Sergio Perez and Ferrari's Sebastian Vettel, who overtook teammate Charles Leclerc for his first podium of a difficult season.

“It is a bit of a surprise to snatch the podium, but I am certainly very happy," Vettel said. “It was quite intense but good fun."

It was also Perez's first podium of the campaign, while teammate Lance Stroll finished only ninth despite leading from pole position for much of the 58-lap race.

Vettel, a four-time F1 champion, was quick to congratulate his longtime rival, crouching by his cockpit and shaking his hand as he spoke.

Hamilton won his first title with Mercedes in 2014, and every one since except for 2016 when then-teammate Nico Rosberg beat him in an acrimonious battle that saw the teenage karting friends fall out.

“Surely one of the greatest achievements in the history of sports,” Rosberg said on Twitter. “Congratulations Lewis and enjoy the celebrations with your family and friends.”

Former England and Manchester United defender Rio Ferdinand Tweeted that Hamilton is “the greatest sportsman this country has ever produced.”

Stroll started from pole ahead of Red Bull’s Max Verstappen on a resurfaced and skiddy circuit not used in F1 since 2011.

“This was a big test for me," Hamilton said. “I don’t remember having an ice race before.”

A chaotic start saw Verstappen stall while Hamilton moved up to third only to lose grip and get overtaken by Red Bull's Alexander Albon and Verstappen. Vettel made a great move from 11th to third, but Bottas spun and dropped right down.

The virtual safety car was activated on Lap 13 after Alfa Romeo’s Antonio Giovinazzi pulled over on the side of the track.

The impatient Verstappen pushed too hard behind second-place Perez and lost control to spin twice on the track. He boxed for new tires again on Lap 19.

Halfway through the race, Stroll and Perez were ahead of Hamilton but losing ground. Stroll came in for new tires on Lap 37 and Hamilton used DRS to get past Perez one lap later and take the lead.

Stroll’s tire change backfired and he was soon passed by both Ferraris, while Bottas spun for the fourth time at the back of the pack.

On a humiliating day for the Finnish driver, he was lapped by Hamilton near the end.

The next step for Hamilton is signing a new contract, and he hinted contract talks will start soon.

“Definitely is something we do need to get onto,” he said. “I wanted to put it aside and wait until the job is done. Probably over the next weeks ... But we will get it done, I'm sure.”