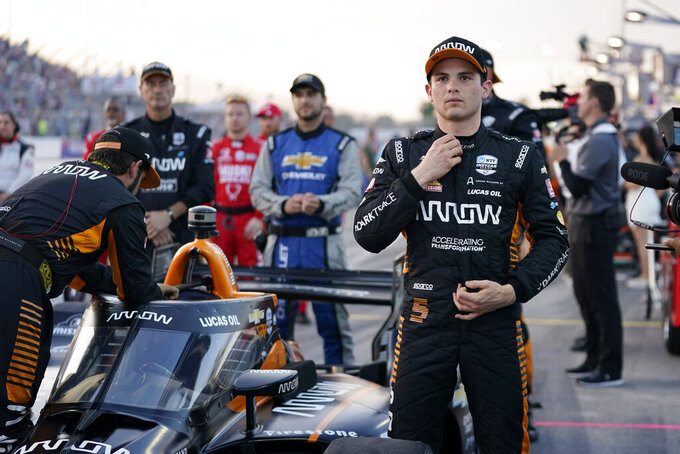 Pato O'Ward (5) stands next to his car before the start an IndyCar auto race at World Wide Technology Raceway on Saturday, Aug. 21, 2021, in Madison, Ill. (AP Photo/Jeff Roberson)

MADISON, Ill. (AP) — Alex Palou stood in the darkened infield watching a replay of the crash that had knocked him out of the final oval event of the season and, consequently, swallowed the last of his lead in the IndyCar standings.

The rest of the field roared on without him Saturday night at World Wide Technology Raceway after Palou was caught in a three-car accident triggered by yet another sketchy restart.

Sloppy racing and botched restarts have been a problem all season in IndyCar — remember, eventual race winner Marcus Ericsson drove up and over Sebastien Bourdais even before the field got to the restart line at Nashville earlier this month — and a rash of impatient and overaggressive driving has jumbled the championship fight.

“We’ve had some pretty erratic and some pretty crazy driving this season, but it just seems to go unnoticed,” Scott Dixon, the six-time and reigning IndyCar champion, said after he was collected in the crash with teammate Palou.

The race winner, Josef Newgarden, agreed: “I think people are driving aggressively these days. You almost have to match it to some degree because if you don’t, you just get run over."

And Palou, helplessly stuck outside the care center as Pato O'Ward cruised past him for the IndyCar points lead, simply wondered why there was so much impatience with nearly 200 laps to go. “It's so early. I mean, if it's the last lap of the race, I can understand. But it's still early.”

The dicey racing has upturned the championship race and put O'Ward, a 22-year-old Mexican with Formula One aspirations, on top of the IndyCar standings. O'Ward in two weeks went from 42 points down to 10 up on Palou, a 24-year-old Spaniard who has led after eight of 13 rounds.

Palou was last bumped from atop the standings six races ago, in June at Detroit, where an O'Ward victory briefly pushed him ahead by a single point. There is no favorite in the championship race headed into a three-week West Coast swing close to the season, and only 60 points separate O'Ward from Ericsson in fifth.

Newgarden's victory leapfrogged him from fifth to third and only 22 points back, while Dixon lost nine more points to fall 43 behind.

O'Ward, benefactor of the bold — dangerous? — driving, admitted to playing it safe with calculated moves Saturday night. He finished second to Newgarden and was content to follow the better car. O'Ward's only chance to win would've been if Newgarden was slowed by lapped cars “but they were all very respectful. That’s a change.”

And O'Ward seemed to exonerate Rinus VeeKay for his role in crashing Palou and Dixon, noting that the restarts have been a mess this season. In fact, O'Ward believed the blame lay ahead of VeeKay at perhaps Alexander Rossi for creating a nearly three-wide pack heading into the turn.t

“I guess he doesn’t look in his left mirror here. He just turned in, so I had to slam on the brakes so I didn’t crash,” O'Ward said. “I’m assuming that is what caused the checkup behind for sure. For me it was sudden and pretty aggressive, yes.”

He contended some in the field raced dirty because “I had a lot to lose and they know that. They’re just taking advantage of what position they’re in in terms of the championship.”

Dixon believes it is time for IndyCar race control to get involved and, well, control the erratic drivers. There's so much at stake and it seems unfair when careless, sloppy decisions collect drivers trying to race the right way.

Newgarden admitted after Saturday night's victory it was difficult to bite his tongue and not name-check the worst offenders. But he said it's up to individual competitors to learn the nuances of their rivals and figure out who it is safe to race around.

“We all have our feelings on who we feel like is not the right person to be around or who we think is aggressive more than others. It’s just part of the learning process, trying to understand your competitors,” he said. “It’s like that in any series. Everyone knows or has an opinion on who they think is probably not safe to be around on the track."

There's a purported hierarchy in NASCAR in which the veterans will mercilessly denounce dangerous driving, lack of etiquette and dismissal of the gentleman's agreement. Newgarden doesn't think IndyCar has a similar one.

So it comes down to self-policing and figuring out how to race each individual driver, he said.

“You end up causing enough problems in a row, an individual, that’s going to turn into a bad situation,” Newgarden said.

“I don’t know why it’s so hard to comprehend. Man, just stay in one throttle, then go. It’s so simple,” O'Ward said. “You see the first (car) jump a little bit, let’s go. If not, you just get eaten. They stop, you stop, you’re relying on the guys behind to stop and it just creates chaos.”