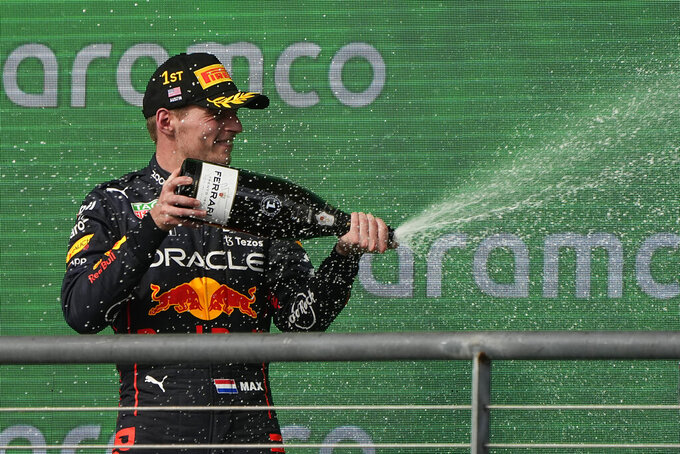 Those are some of the expenditures Red Bull claimed Friday it improperly misrepresented when submitting its 2021 financial report. It led to a breach of Formula One's spending cap, set at $145 million for its debut season, and penalties handed down by the series governing body.

The FIA on Friday ordered the F1 championship team to pay a $7 million fine and forfeit wind tunnel time as punishment for overspending by $1.8 million during Max Verstappen’s first championship season. The FIA found 13 discrepancies in an audit of over 75,000 line items on Red Bull's 2021 financial report, team principal Christian Horner said.

But he was adamant the areas of overspend had zero benefit on team performance. He called the penalties “draconian,” and said the cost cap structure inherited by first-year FIA president Mohammed bin Sulayem was “immature.”

Horner also strongly intimated Red Bull was targeted because of its on-track success and blasted the initial leak that the FIA was investigating a potential spending breach. He said the weeks of paddock sniping and cheating accusations damaged Red Bull's reputation and the team only “begrudgingly” settled with the FIA to end the saga that has engrossed the world's top motorsports series.

“Not one penny was spent on performance,” said Horner, who shooed away complaints the penalty was too soft.

“That's an enormous amount of money that is payable within 30 days,” Horner said of the fine. He said the loss of 10% time in the wind tunnel “represents anywhere between a quarter and a half a second worth of lap time. That has direct effect on next year's car.

Horner had compulsive note-keeping on the entire process, noting Red Bull was informed it was over the cap exactly 19 minutes after Verstappen won his second F1 title on Oct. 9.

The FIA on Friday also fined Aston Martin $450,000 for a “procedural” violation on its 2021 expenditure submission. The FIA found Aston Martin had incorrectly excluded or adjusted 12 separate costs, among them a signing bonus, the costs of desks and chairs, and, like Red Bull, financial discrepancies in catering.

The FIA noted that neither team acted “in bad faith, dishonesty or in a fraudulent manner” in their respective breaches. The penalties were deliberately delayed one week out of respect of last week's death of Red Bull co-founder Dietrich Mateschitz.

Coincidentally, Horner argued Friday that the Red Bull drinks consumed by the race team and its guests shouldn't count because they come from a different part of the company.

To hear Horner's nearly 50-minute long defense of Red Bull's spending, the saga seems trite. He spent a great deal of time defending high-end catering services, and included a reference to Red Bull's sick pay policy. Horner said the team paid sick leave to an employee as an excludable cost, but “had the person died, and thankfully they didn't, the cost would have been excluded."

Either way, the penalties in no way satisfied Red Bull rivals, many of whom called for harsh penalties ranging from stripping Verstappen of last year’s title and a reduction in future Red Bull spending. Red Bull has already wrapped up both a second F1 title with Verstappen and the constructors' championship with three races remaining this season.

McLaren head Zak Brown had accused Red Bull of cheating by breaching the spending cap in a letter Brown sent to the FIA. The cost cap was put in place as a competition equalizer to prevent the larger, heavily-funded teams from outspending the smaller organizations struggling to keep up.

Most teams believed that if Red Bull only received a monetary penalty it would encourage others to deliberately overspend and simply pay the fine as punishment. Horner was incensed by Brown's letter, which Horner said was just another baseless allegation that had led to Red Bull employees' children being bullied at school.

“It's still a mystery to me how a team can publicly say they submitted comfortably within the cap and what is in contention is some $200k, when in fact they were $1.8 million over, which is not an insignificant number," said Brown. “There is a competitive advantage that has been gained by that.”

Horner said the saga has not distracted Verstappen or teammate Sergio Perez, who on Sunday is trying to become the first Mexican driver to win the Mexico City Grand Prix. He's also trying to finish second in the standings behind Verstappen.

Horner said Verstappen fairly won his 2021 championship. Verstappen, meanwhile, said he knows there are many who will never accept that title.

Verstappen beat Lewis Hamilton in a controversial finish created when the since-fired race director made a late race change in protocol during the season finale that allowed Verstappen to pass Hamilton for the win and the championship.

“From my side I can (accept it), probably they can’t and will never be able to and that’s a problem for them to deal with,” Verstappen said.