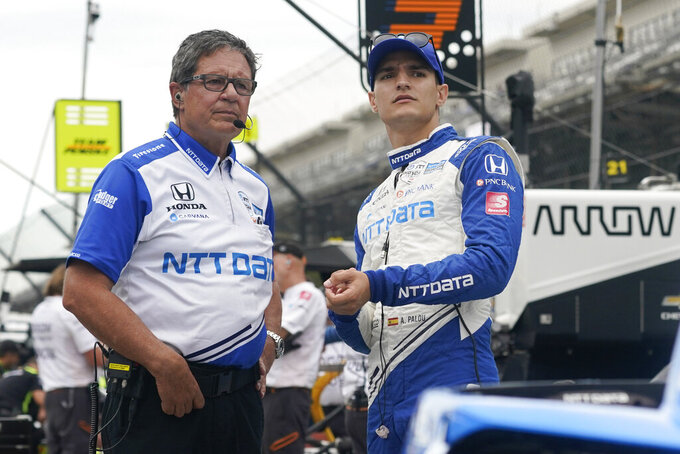 FILE - In this Friday, Aug. 13, 2021, file photo, Alex Palou, second from left, of Spain, talks with a crew member before a practice session for a IndyCar auto race at Indianapolis Motor Speedway in Indianapolis. IndyCar is on a two-week break, but the 24-year-old Palou has no plans to rest as he tries to reclaim his spot atop the championship standings. (AP Photo/Darron Cummings, File)

As he watched his hold on the IndyCar championship slip away, Alex Palou was neither angry nor frustrated over his second bad break in as many weeks.

An engine issue had knocked him out of the race a week before, and seven days later he was collected in a three-car crash at Madison. The back-to-back mishaps allowed Pato O'Ward to turn a 42-point deficit into a 10-point lead over Palou with just three races left on the schedule.

Two-time series champion Josef Newgarden pulled within 22 points of the lead and five drivers remain squarely in the title hunt.

Palou refused to complain about the three penalties he has incurred for engine changes — including one last Saturday at World Wide Technology Raceway that forced him to start 21st in a 24-driver field — or the crash that made him a spectator as O'Ward took the championship lead.

“I'm driving for Chip Ganassi Racing in IndyCar. I think I'm lucky," Palou said as the race roared on without him.

His position didn't change after watching replays of the crash triggered by Rinus VeeKay's aggressive driving, or after VeeKay texted him Sunday to apologize. The 24-year-old Spaniard has maintained a positive outlook and cheerful disposition despite a streak of bad breaks.

“I was not like this before, but once I got to do what I was always dreaming of, which was to drive in IndyCar, and then this year being part of a big team and being able to fight for wins and the championship, I just feel I am super lucky and that's why I'm always super happy,” Palou said in an interview with The Associated Press.

Few had heard of Palou when he turned up at Mid-Ohio summer of 2019 to test an Indy car for Dale Coyne Racing. Palou had spent two seasons racing in Japan with a season of Formula 3 in Europe sandwiched in between. He had enough funding for Coyne to give him a chance in 2020 with a fulltime IndyCar ride and Palou turned it into a two-year deal with Ganassi.

Palou won his debut race with his new team to open this season, becoming just the second Spaniard to win in the IndyCar Series. He followed it with a runner-up finish to Helio Castroneves in the Indianapolis 500, a second victory at Road America, six podiums and the championship lead after eight of 13 rounds.

Palou has not dropped lower than third in the standings all season and has finished seventh or better nine times. Now everybody knows who he is: a legitimate title contender.

“I knew here in America, as soon as you do great things, have big opportunities," Palou said. “I would say about 99% of the people were surprised when I was hired in IndyCar, they were like, ‘Oh no, here we go again.’ And I just thought, ‘Come on guys, let me drive and then we will speak.’"

His talking has been on the track, with Newgarden calling Palou the “full package” among the crop of young, new IndyCar talent.

Palou would like to cap this breakthrough season — his second in IndyCar, second racing in the United States — with a championship he believes is still his to win. The season wraps with a three-race West Coast swing through Portland, then California stops at Laguna Seca and Long Beach, circuits Palou has never raced before because all three events were canceled during his pandemic-disrupted rookie season.

O'Ward won two Indy Lights races at Portland and raced IndyCar at Long Beach, while the other title contenders — Newgarden and Palou's Ganassi teammates, Scott Dixon and Marcus Ericsson — have experience at all three tracks. Dixon has one career victory at Long Beach, site of the Sept. 26 season finale.

Palou has tested at both Portland and Laguna Seca, and had a full day scheduled Wednesday in the simulator learning more about the Portland course. IndyCar has a two-week break before the championship push and Palou intends to spend all of it studying the three tracks.