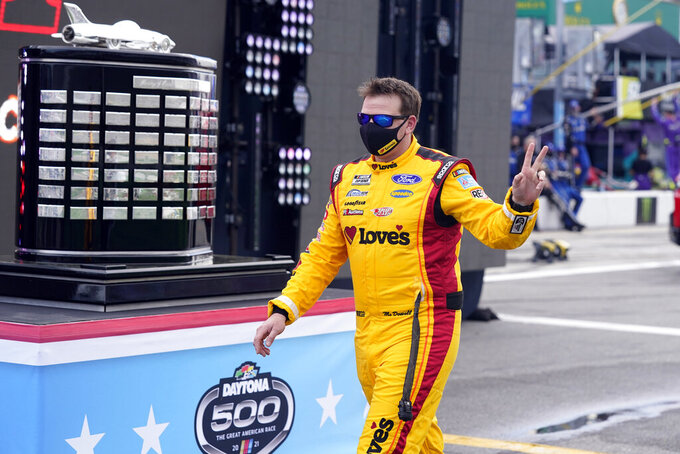 Michael McDowell walks by the championship trophy before the NASCAR Daytona 500 auto race at Daytona International Speedway, Sunday, Feb. 14, 2021, in Daytona Beach, Fla. Michael McDowell followed his Daytona 500 victory with a pair of top-10 finishes. That's three in three races, one shy of his total from all of 2020. Perhaps his Front Row Motorsports team really has turned the corner. (AP Photo/John Raoux)

CHARLOTTE, N.C. (AP) — Michael McDowell was rolling along at Homestead-Miami Speedway when he saw another driver signal for a car to pass.

When McDowell came upon the same driver, he wasn't given the same courtesy.

“I literally saw a driver wave another driver by, and then race me for the next seven laps like it was the last lap,” McDowell recalled Tuesday.

He declined to identify the rival who refused to give McDowell an easy pass over the weekend, but it was an eye-opener for the Daytona 500 winner. A journeyman driver for small-budget teams, McDowell isn't usually racing at the front of the pack or passing cars for top-10 finishes.

But since his Daytona 500 victory — his first win in 358 previous Cup Series starts — McDowell has found himself running with a different crowd. He has opened the season with three top-10 finishes through three races, just one shy of his total last year.

The strong start with Front Row Motorsports has put McDowell in uncharted territory. In the final laps Sunday at Homestead he found himself trying to pass Kevin Harvick for fifth, a previously unthinkable scenario.

It has all validated the effort McDowell put in over 14 years, but it hasn't translated into on-track respect for the No. 34 Ford from his peers.

“There are top guys that don’t want to be passed by the 34 and I get it, I understand that because they think that they’re having a really bad day if the 34 is going around them,” said McDowell, who also acknowledged putting up too strong of a fight when his car was a perpetual backmarker.

“On the flipside, I somewhat deserve it because I race the guts out of everybody and always have," he said. "Even when I was in bad cars I never made it easy on anybody, so I don’t expect them to make it easy on me.”

McDowell next goes to Las Vegas Motor Speedway on Sunday ranked a career-high fourth in the Cup standings. His best finish in the final standings was 23rd last season, and when he opened this year, McDowell openly doubted his team could crack the top 16 required to qualify for the playoffs.

He still wasn't sure how Front Row stacked against the competition after winning the Daytona 500, which wasn't exactly a fluke because McDowell is a respected superspeedway racer. But he has yet to fall back into the field to where he's accustomed to racing.

“To make a big jump like we did, I wouldn’t say that it’s a complete, like, unbelievable shock, but it’s pretty close to it,” McDowell said. “We have definitely out-performed where we thought we’d be."

The schedule to start this season has benefitted McDowell in that the Cup Series has raced on three completely different circuits. He typically does well at superspeedways and road courses, the first two venues that opened the season. And he was 15th at Homestead last year, giving Front Row a baseline to work with in its return last week.

But the shift now to Las Vegas, a traditional 1.5-mile intermediate, will be a true test of how much Front Row has actually improved.

McDowell said there’s been no radical change to his program. But he’s benefitted from solid starting positions — qualifying has been scrapped during the pandemic and the field is set based on a formula, so McDowell has not started lower than 17th — and tighter inspection regulations have prevented bigger teams from exploiting loopholes, leveling the playing field a bit.

Now he must figure out how to approach the rest of the season.

Las Vegas, for example, is part of the 10-race playoffs that begin in September. McDowell can race Sunday to extend his streak of top-10 finishes or Front Row can use it as a study session for when the team returns with a championship on the line.

Deciding on a best approach is new territory for McDowell.