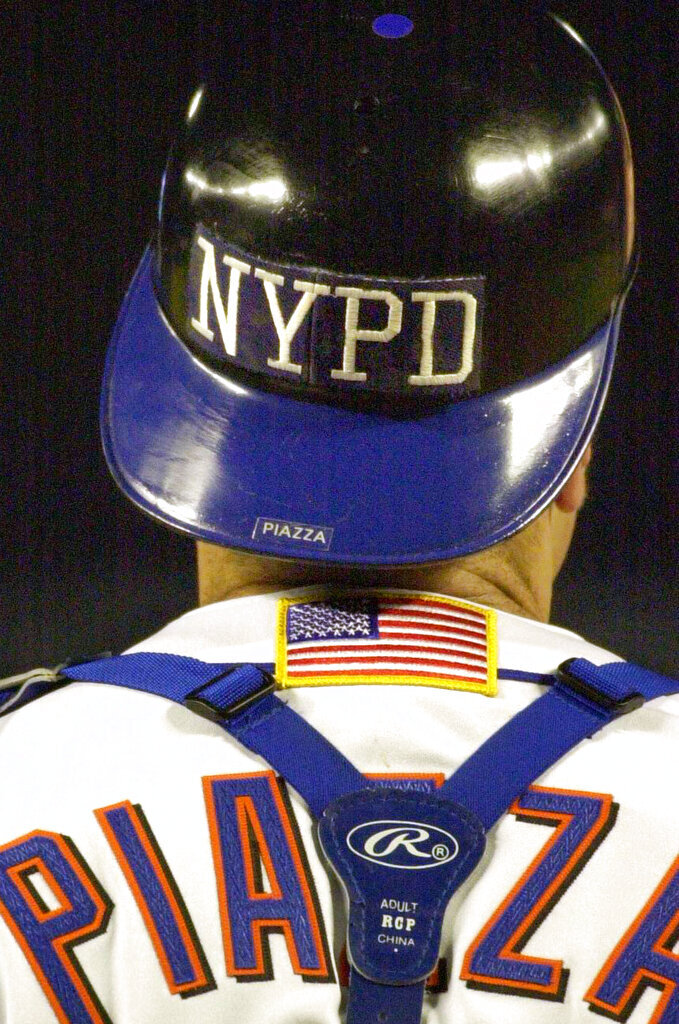 FILE- In this Sept. 21, 2001, file photo, New York Mets catcher Mike Piazza wears the NYPD logo on his helmet as he takes the field in the top of the fifth inning against the Atlanta Braves in New York. (AP Photo/Mark Lennihan, File) 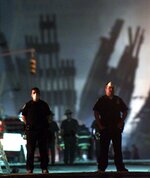 On that sunny morning two decades ago, in the hours and minutes and seconds before everything changed, sports was playing its usual role in the fabric of life.

There was fierce debate over what had been ingested or injected or rubbed into the body of Barry Bonds, whose most recent game had produced three more homers to push him to 63 for the season.

The opening weekend of the NFL season was capped by Denver’s 31-20 victory over the New York Giants on Monday Night Football, in the debut of the Broncos’ sparkling new stadium.

There was still a buzz over Venus Williams beating little sister Serena in prime time for the U.S. Open tennis singles title.

The mighty Miami Hurricanes were the No. 1 college football team in all the land, coming off a 61-0 thrashing of Rutgers.

Martin Truex Jr. remembers being at Dover International Speedway, an up-and-coming racer going through a routine testing session in preparation for his debut in NASCAR’s second-tier stock car series.

Then, word came of an unfathomable tragedy. The ambulance that was standing by at Dover in case anything went wrong during Truex’s practice laps had to get to a far more important task in New York City, about 170 miles away.

The test was over. In some ways, so was life as Truex and the rest of us knew it.

“We’re all wondering what the heck’s going on,” said Truex, who went on to stardom in the NASCAR Cup series and remains one of its top drivers. “This was a long time ago. There wasn’t like social media and all this stuff on your phone. You didn’t know. You had to turn on the news and see what was happening.”

When Truex and his crew located a TV set, they couldn’t believe their eyes.

“It was like we were in some crazy nightmare,” he says now.

In some ways, we’re still struggling to wake up from Sept. 11, 2001, when four planes plunged from the skies, two skyscrapers crumpled to the pavement and nearly 3,000 people lost their lives.

We’ve certainly squandered what became a fleeting moment in time, when sports helped us cope with the grieving, get on with the healing and provided a glimmer of hope that we truly were one nation, indivisible.

The first post-9/11 baseball game at Shea Stadium, where Mike Piazza hit a game-winning homer for the New York Mets with the ruins of the World Trade Center still smoldering just a few miles away, seems many lifetimes ago.

The images of President George Bush strolling confidently to the pitcher’s mound at Yankee Stadium -- a proxy for us all when he delivered that perfect strike of a first pitch at the World Series -- have faded like some flickering, black-and-white film from another century.

In retrospect, we asked far too much from the games we love, the athletes we cheer.

Now, in the grips of another seminal national tragedy, one that has produced a 9/11-like death toll many days over for the last year and a half, we should be much more realistic about the role that sports can play in the recovery process.

Sure, the games are a welcome respite from the daily recitation of misery, but that is all.

No one is naïve enough to believe that we'll suddenly put aside our stark differences because Tom Brady led the Super Bowl champion Tampa Bay Buccaneers to a stirring, last-second comeback in their season-opening victory over America's Team, the Dallas Cowboys.

Instead of a salve, sports has become a mirror on our angry divisions in the midst of the COVID-19 pandemic.

While most professional and college athletes have gotten vaccinated against the virus there have been plenty of vocal holdouts who consider it an infringement on their freedom.

One of the most notable is Buffalo Bills receiver Cole Beasley, who said, “I may die of (COVID), but I’d rather die actually living.”

“I’ll play for free this year to live life how I’ve lived it from day one,” Beasley added in a rant this summer. "If I’m forced into retirement, so be it.”

Teams willingly played in sparsely filled or empty arenas in the first year of the pandemic, hoping to reduce the death toll, but those financially crippling policies were phased out with the arrival of vaccines and the false hope that we finally had the upper hand on COVID-19.

Even with a startling rise in cases and deaths over the past two months stadiums are filled to capacity — many of them with no requirements to wear a mask or provide proof of vaccination.

Some have celebrated this return to a sense of normalcy. Just as many have expressed disbelief at the scenes of 70,000, 80,000 — even 100,000 fans — packed into stadiums with hardly anyone wearing a mask.

“Oh my god. The COVID-Bowl,” former NBA player Rex Chapman tweeted after a sellout crowd at Virginia Tech bounced up an down to Metallica's “Enter Sandman” as their team charged onto the field — though it must be noted there is little evidence of sports events becoming super-spreaders for the virus.

Sports still bears the scars of that awful day two decades ago, from the metal detectors we must go through to enter the stadium to the playing of “God Bless America” during the seventh-inning stretch.

But any hope that our beloved athletes or favorite teams can help heal our real-life ills — whether it's COVID-19 or some future challenge we can't even begin to imagine — have long since faded.

These are just games.