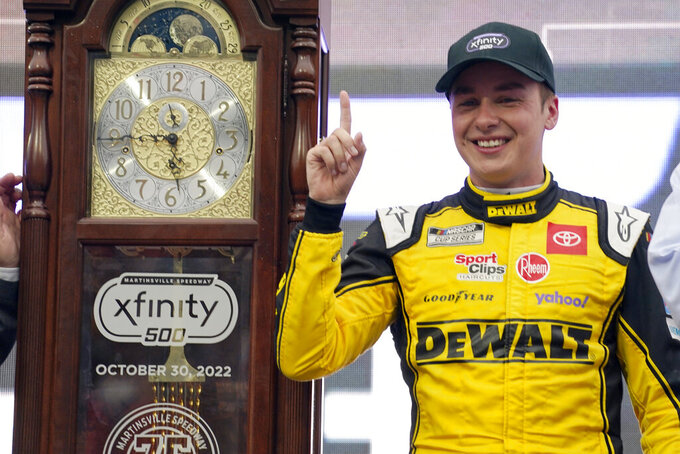 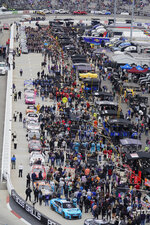 Ross Chastain's aggressive style hasn’t made a lot of friends in NASCAR’s top series. Now, he'll be contending for a championship because of that approach.

Chastain pinned his Chevrolet against the outside wall of the 0.526-mile Martinsville Speedway and was sailing at some 70 mph faster than the rest of the field, careening from 10th place to fifth on the final lap to give Trackhouse Racing its first championship appearance.

Chastain credited his video game playing for the dramatic move on the final lap.

“Oh, played a lot of NASCAR 2005 on the GameCube with (younger brother) Chad growing up,” he said. “You can get away with it. I never knew if it would actually work.

“I mean, I did that when I was eight years old. I grabbed fifth gear, asked off of two on the last lap if we needed it, and we did. I couldn’t tell who was leading. I made the choice, grabbed fifth gear down the back. Full committed. Basically let go of the wheel, hoping I didn’t catch the turn four access gate or something crazy. But I was willing to do it.”

Bell had to win to advance to the final four next week at Phoenix Raceway and he pulled it off to give Joe Gibbs Racing and Toyota one spot in the finale. Bell also won on the Charlotte Motor Speedway road course in the final race of the second round of the playoffs, so has now twice advanced with victories.

But this win was different.

“Man, I say it all the time, but the driver is just a small piece of the puzzle for these races,” Bell said. "The reason why this car won today is because it was the best car on the racetrack. Adam Stevens, Tyler William, this entire 20 group, they just never give up. When our back is against the wall, looks like it’s over, they show up and give me the fastest car out here.

The final four drivers in the Cup Series winner-take-all finale are Bell, Joey Logano, Chase Elliott and Chastain, who bumped foe Denny Hamlin from the championship with his spectacular last-lap scramble.

Hamlin, while disappointed, was impressed.

“Great move. Brilliant. Certainly a great move," he said of Chastain's tactic. "When you have no other choice, it certainly is easy to do that. But well executed,” he said.

Bell passed Chase Briscoe, who also needed to win to advance to the championship, with five laps to go to earn the automatic berth into the championship race. It was Bell who was caught in Bubba Wallace's retaliation of Kyle Larson at Las Vegas and Bell being collected in that crash dropped him to last of the eight drivers.

He knew since then it would take a victory for Bell to race for his first Cup title, and he pulled it off on NASCAR's oldest track.