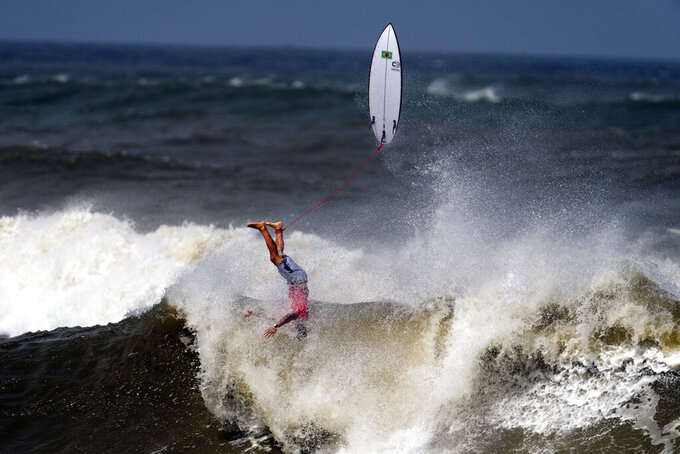 Brazil's Gabriel Medina crashes on a wave during the bronze medal heat of the men's surfing competition at the 2020 Summer Olympics, July 27, 2021, at Tsurigasaki beach in Ichinomiya, Japan. (AP Photo/Francisco Seco)

Sports have a knack for reflecting society. Just look in the mirrored goggles of swimmer Reece Whitley, and you’ll see it splashing back to life.

Our attachment to games is driven by backstory and buzz. In 2020, the narratives were interrupted and the stands left eerily empty.

Over the course of 2021, the drama returned.

The backstory: a years-long rivalry between Tyson Fury and Deontay Wilder, its third edition billed as a “Once and For All” heavyweight bought. The buzz: a Las Vegas arena exploding with barbaric cheers when Fury lands a powerful left en route to an 11th-round knockout.

The backstory: seven-time Formula 1 champion Lewis Hamilton scraping Sunday after Sunday to hold off upstart challenger Max Verstappen. The buzz: shouts of shock and alarm when they collide at the Italian Grand Prix, Verstappen’s Red Bull car flipping into the air and landing atop Hamilton’s Mercedes.

The backstory: Simone Biles, vaulting into Tokyo with her sights on Olympic history. The buzz: stunned silence when the GOAT withdrew during the team final, then a global roar of sympathy and support when she cited her mental health to be the cause.

The path to the 2020 games was a strange and strenuous one. French cyclists were reminded of that during training of the science fueling the global re-opening — the center of their velodrome was turned into a mass vaccination center.

For some, the shutdown was an opportunity. Allyson Felix used it to train and qualify for her fifth Olympics — and first as a mother. Three years after delivering Camryn prematurely via emergency C-section, the 35-year-old kissed her daughter following a second-place finish in the 400-meter at the U.S trials. She earned a gold and a bronze in Tokyo.

For others, it merely delayed their turn in the spotlight. Such was the case for surfing and 3-on-3 basketball, among the new additions to the Olympic slate.

Fans weren’t allowed at Tokyo events, and foreigners won’t be there for Beijing’s Winter Games next February, either. But elsewhere -- around our pitches, courts, fields and diamonds -- the year is ending in front of full houses once again. Those cardboard cutouts, a bizarre stab at normalcy in a time that was anything but, are at last a thing of the past.