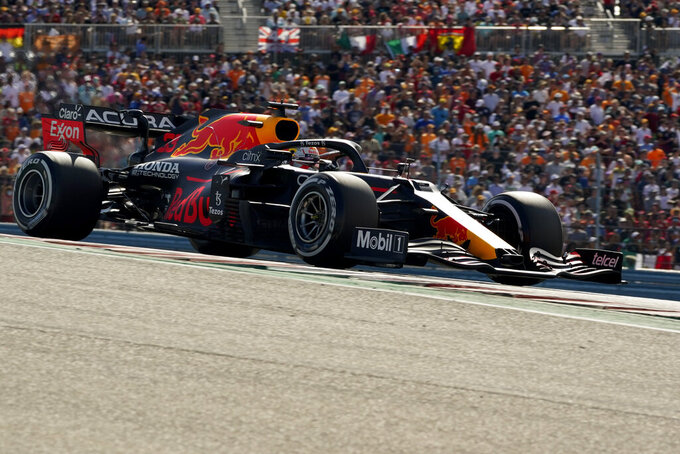 Red Bull driver Max Verstappen, of the Netherlands, races during the Formula One U.S. Grand Prix auto race at the Circuit of the Americas, Sunday, Oct. 24, 2021, in Austin, Texas. (AP Photo/Eric Gay)

AUSTIN, Texas (AP) — If there ever was a time for Max Verstappen to flinch in this riveting Formula One championship battle with Lewis Hamilton, it would have been Sunday in the closing laps of the U.S. Grand Prix.

The young Dutchman seeking his first world championship was being chased by the seven-time champion, and Hamilton was rapidly closing in on the lead under the hot Texas sun at the Circuit of the Americas.

The intensity of the tightest championship race in years might have derailed a different driver — especially when Hamilton pulled within 1 second on the final lap — but Verstappen thrived under pressure and won his eighth race of the season.

“It was exciting, the pressure was on, not knowing how quick Lewis was going to get you,” Verstappen said. “We managed to hang on at the end.”

The victory doubled Verstappen's lead over Hamilton to 12 points in the standings with five races remaining and could prove to be a pivotal win in this classic championship battle.

Verstappen and Red Bull won on a track where Hamilton and Mercedes have been dominant for years — Hamilton is a five-time winner at COTA — and he made Verstappen work for the win.

Hamilton chased Verstappen over the final 18 laps and maybe if there had been one more lap, he might have caught Verstappen and reclaimed the points lead.

The 24-year-old now has some breathing room heading into Mexico City, a high-altitude stronghold for Red Bull.

Hamilton is seeking a record eighth F1 title, and fifth in a row.

“Congratulations to Max, he did a great job today. It was such a tough race," Hamilton said. “Got a good start and gave it absolutely everything, but in the end of the day, they just had the upper hand this weekend.”

As the popularity of Formula One explodes in the U.S., the championship rivals delivered a dramatic finish in front of an estimated crowd of 140,000. It was one of the largest sporting events since the start of the pandemic and drew the rich and famous to the Austin circuit.

Among the celebrities in attendance were actor Ben Stiller, rapper Meghan Thee Stallion, golfer Rory McIlroy and tennis champion Serena Williams, who all participated in the pre-race grid walk. Shaquille O’Neal hosted a post-race DJ dance party and delivered the winner's trophy to the podium, where the 7-footer loomed large over Verstappen and Hamilton.

Sunday was the final race in the Circuit's original 10-year contract, but the U.S. Grand Prix is on the 2022 race calendar. Track President Bobby Epstein has said he expects to get a new long-term deal from F1.

“It's amazing to be here, but also to see so many (fans) around the track," Verstappen said before stepping to the podium as fans rushed onto the track for the celebration. "Hopefully we can do this for many years to come.”

Hamilton and Verstappen kept the temperature rising all weekend. First, Verstappen called Hamilton a “stupid idiot” and flipped him the middle finger after an aggressive driving move in Friday practice. Hamilton later dismissed it as “fun and games.” Verstappen then edged him for pole position on the final lap of qualifying Sunday.

All of it set up a fierce fight for the lead into Sunday's first turn because the winner at COTA has always come from the front row. Hamilton quickly jumped past Verstappen and the two traded the lead four times over 56 laps.

It was a breathless start as Verstappen and Hamilton have collided twice this season and the risk of another one was high. This time Verstappen backed off the first corner and let Hamilton take the lead “to avoid any trouble.” That was the only moment of potential danger for either car all day.

The drivers didn't seem to carry any hard feelings from the previous incidents when the race was finished. When Hamilton clinched the championship here in 2015, he flippantly tossed his hat to sulking teammate Nico Rosberg.

After Sunday's checkered flag, Hamilton and Verstappen exchanged fist bumps in pit lane, then clinked champagne bottles on the podium.

Yet Hamilton knows Sunday's result was a missed victory on a favorable circuit as Verstappen fights to dethrone him in the championship.

Hamilton acknowledged Mexico City's Autodromo Hermanos Rodriguez, where Verstappen has won twice, is a “very strong circuit” for Red Bull. So is the next race in Sao Paolo, Brazil, where Verstappen won in 2019.

“It's going to be tough,” Hamilton said.

Verstappen has had high expectations since he first joined the F1 grid as a 17-year-old in 2015. Hamilton, at 36 a series veteran, has been the dominant figure in F1 for nearly a decade and has won four consecutive championships.

One more Hamilton title will break his tie with Michael Schumacher for most in F1. But he hasn’t been in a fight like this in a long time.

After his post-race celebration, Verstappen was quickly back to all business. He was as unflappable about the unfolding title chase in his favor as he was holding off Hamilton on the final laps.

“This doesn't really change a lot,” Verstappen said. “This is all about details. A win doesn't give me more confidence. We are all confident. We need to nail details, starting in Mexico.”

Sergio Perez finished third to put both Red Bull's on the podium, but the Mexican raced without access to water and called it one of the most physical race he's ever experienced.