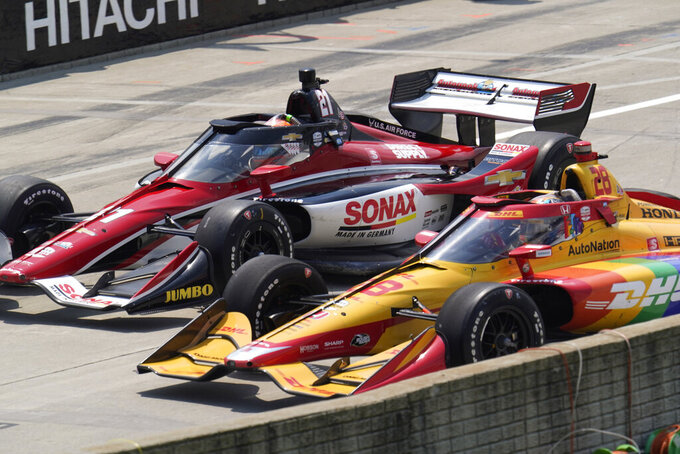 LEXINGTON, Ohio (AP) — Felix Rosenqvist and Rinus VeeKay returned to their cars at Mid-Ohio Sports Car Course on Friday, where they were welcome sights in the IndyCar paddock but neither dazzled in their return from injury.

Rosenqvist was out two races following a crash last month at Detroit, an impact so severe the Swede was shocked it was concussion-like symptoms keeping him out of the car rather than a broken bone.

“You only have one brain," Rosenqvist said.

Rosenqvist was fast in his return to Arrow McLaren SP but spun to bring out a red-flag during the only practice session. He was 13th overall on the day, but just half a second off teammate Pato O’Ward.

“It is kind of slippery out there," he said. “The car seems pretty fast.”

VeeKay was back 18 days after falling off his bicycle during a training ride, a tumble that cracked both his collarbone and helmet. The 20-year-old Dutchman had surgery, missed one race, but returned to Ed Carpenter Racing confident he can get back inside the top-five in the standings. He dropped only one spot to sixth because of the injury.

VeeKay spent three hours a day for an entire week in hyperbaric oxygen therapy — long enough to nearly finish both seasons of “Manifest” on Netflix as he lay n a chamber hoping to speed his recovery — and was in the Chevrolet simulator this week testing his range of motion.

“Yeah, ready to race and ready to win,” VeeKay said. “As long as I don’t go overhead with my arms, it’s going to be fine,” VeeKay said. "If I cheer going past the checkered flag first, I’ve got to throw up my right hand instead of my left hand.”

VeeKay was pedestrian in the 45-minute practice session, 18th fastest, but right on the rear of teammate Conor Daly in 17th.

VeeKay was irritated by the belt over his left collarbone late in the session, but thought some adjustments would help. His car? Not so great.

“The team makes great adjustments. It's going to be alright," he said.

“Not doing anything different, don’t have to," the Team Penske driver said. “We pick up where we left off, just do it again.”

O'Ward was second and followed by Jack Harvey, driving for Michael Shank, winning team owner of the Indianapolis 500 winner who considers Mid-Ohio his home track.

“Mike has been awesome, there's no added pressure," said Harvey. "But we all want to get a good result for him, in the place he grew up.”

Alexander Rossi was fourth for Andretti Autosport, which had James Hinchcliffe 10th on the board in what's been a non-existent season. The Canadian is 20th in the standings, no podiums, no poles, no laps led.

Hinchcliffe was a star a week ago as guest analyst during Tony Stewart's prime-time all-star series, but the “Dancing With the Stars” runner-up said he's not looking ready to move from racing to the television booth.

“The focus is still very much driving full time. And for ’22 and beyond,” he said. “We’ve been having some fun with the TV stuff, but the focus is very much on driving.”

Rossi, slumping through yet another season far below expectations, seemed resigned to his plight.

Graham Rahal, who considers Mid-Ohio his home track, was fifth. Santino Ferrucci is back with Rahal Letterman Lanigan for his fourth race and was 24th, one spot ahead of Takuma Sato.

Rahal said before practice that after two crashes in the last three races, Ferrucci has to reign it in.

“I’m not trying to be hard on the guy," he said. "Two of my guys almost didn’t make it to the (Detroit) race because they had heat exhaustion from fixing the car. That affects my program, same with Taku."

Ryan Norman, a 23-year-old from outside Cleveland, was 22nd in his first IndyCar practice. He'll make his debut Sunday driving a third car for Dale Coyne Racing with RWR.

“This is where I’ve wanted to be my whole career,” said Norman, who had Gabby Chaves substitute for him in the IMSA race at Watkins Glen.

IndyCar points leader Alex Palou was ninth fastest, behind teammate and six-time champion Scott Dixon. Palou has a 28-point lead over O'Ward, while Dixon is 53 back in third.

Newgarden, winless like all of Team Penske, is fourth in the standings but 88 points behind Palou.

Marcus Ericsson was 21st on the board for the Ganassi drivers, while Jimmie Johnson was slowest in the 26-car field. Team owner Chip Ganassi this week said he sold his NASCAR team to Justin Marks and Trackhouse Racing, but still holds his IndyCar, IMSA and Formula E organizations and was with the sports cars Friday night in upstate New York.