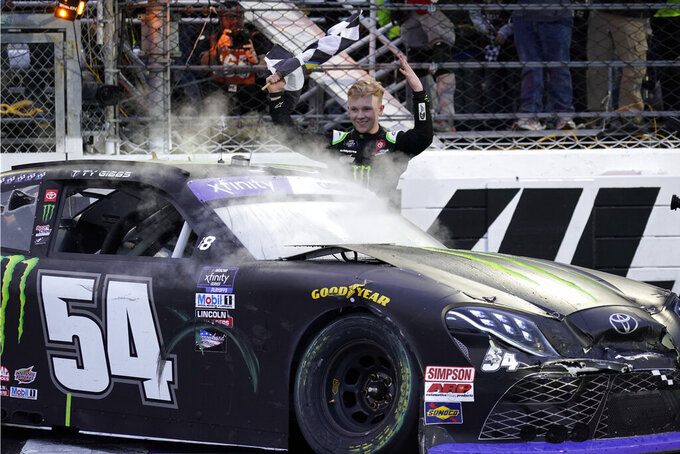 MARTINSVILLE, Va. (AP) — Ty Gibbs wrecked teammate Brandon Jones out of the lead in the third overtime of Saturday's Xfinity Series in a controversial victory that had the Martinsville Speedway crowd booing Gibbs.

When the 20-year-old grandson of team owner Joe Gibbs went to victory lane, fans chanted “thank you, Grandpa,” to spoil the celebration.

The victory moved Gibbs into next week's Xfinity Series championship finale, where he will race against three Chevrolet drivers from JR Motorsports. Had Gibbs stayed in second behind Jones, the victory for Jones would have put two Toyotas from JGR in the championship finale.

Instead, Jones failed to qualify and Justin Allgaier took the fourth spot to join his teammates Josh Berry and Noah Gragson in next Saturday's winner-take-all finale.

Drivers were immediately critical of Gibbs, who is expected to be promoted into Kyle Busch's No. 18 Cup car next season. Among those weighing in was JGR veteran Denny Hamlin, who tweeted “I miss J.D.” about Gibbs' uncle, J.D. Gibbs, the late president of the organization.

Gibbs has been involved in quite a bit of controversy this year and has established himself as an aggressive driver on and off the track. He was in a fistfight with Sam Mayer following an Xfinity Series race, and was fined $75,000 by NASCAR for a pit road incident in the Cup Series.

Ty Dillon had crowded Gibbs when he pulled out of his pit stall, and Gibbs retaliated by steering his car into Dillon’s. It nearly ran Dillon into multiple crewmembers and NASCAR officials who were working on the right side of Chris Buescher’s car.