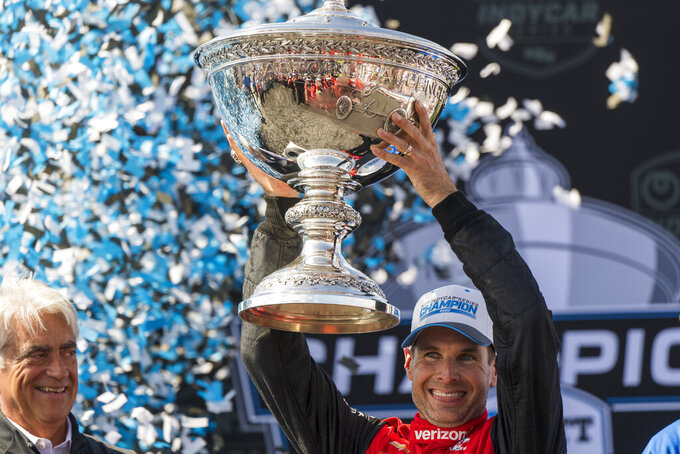 MONTEREY, Calif. (AP) — IndyCar's intense season came to a nail-biting end in which Team Penske's superstars duked it out for the title and the future of the race winner clouded once again.

Will Power beat Team Penske teammate Josef Newgarden by 16 points for the Australian to win his second IndyCar title, and the 16th national championship for Roger Penske. He finished third on Sunday at Laguna Seca Raceway, a spot behind crestfallen Newgarden.

But the win went to outgoing IndyCar champion Alex Palou, who has been entangled in a messy legal battle in negotiations and a courtroom over his 2023 rights. Chip Ganassi Racing says it picked up next year's option on the Spaniard; McLaren Racing says it has Palou under contract.

Palou insisted in July he'd be a McLaren driver next season, but as he celebrated his only win of the season, with owner Chip Ganassi behind him, Palou sounded far less certain. But he did indicate a resolution could be coming, perhaps as soon as Monday.

“Yeah, we talk. We talked in Portland. We talked before that ... I think, Nashville. "Talked this morning,” Palou said of recent, rekindled communication with the team owner.

“We’ll see when I know. I wish I could tell you guys, ‘Hey, I’m doing this,’ but I don’t have an answer yet. Maybe tomorrow.”

It was a blatant about-face that closed a spectacular season in which IndyCar, even without the pizazz and popularity of a Netflix show, drew the most viewers to its 17-race schedule since 2008.

It's championship had seven drivers in it until the penultimate race, and with five still mathematically in the hunt on Sunday at Laguna Seca Raceway, IndyCar had its tightest championship race since 2003 to celebrate.

The battle came down to Ganassi vs. Team Penske, which had its three drivers in the hunt for Chevrolet against six-time champion Scott Dixon and Indianapolis 500 winner Marcus Ericsson in Honda-pushed Ganassi entries.

Power, at 41 years old and eight years removed from his only other title, went into this season with a refreshed approach. He's played the long-game, he said, and settled for solid finishes rather than pushing for wins.

It was Newgarden who went for the victories and his five led IndyCar this season. But he was inconsistent and crashed hard at Iowa while leading — an accident that caused a probable concussion and required Newgarden to be airlifted out of the track.

Team Penske made it clear this week it did not play team orders and all three of its drivers could fairly race for the title. So it was Power against Newgarden, who started down 20 points to his Australian teammate. Dixon was also 20 points back — and had he not been penalized for speeding in the Indianapolis 500 likely would have collected a record-tying seventh championship — but this was an inside fight.

Newgarden this week admitted he's struggled all season with his drive for perfection; Power has dropped jaws for his new chilled approach.

Newgarden had a disastrous qualifying, went off course, and it pretty much decided his season. Power won his 68th pole to break the record for most in IndyCar.

So Power earned a point for winning the pole, and another point for leading the first lap. He now had Newgarden by 22 and it would take a Power collapse for the American to win a third title. He did everything he could, including three passes in Laguna Seca's famed corkscrew, but the second-place finish just wasn't enough.

“We’re all competitive, and we want to personally be the winners, but when we win as a team, it is big for everybody. I’m filled with a lot of pride,” Newgarden said. “But I’m also filled with a little bit of a relief. I’m kind of happy to come into this offseason reset, recharge, and then figure out a way to just hit everybody harder next year.”

While Newgarden was already wondering what he'd do differently if able to run Sunday's race again, Power was at last ready to relax. He knew all along that nothing any other driver did mattered so long as he finished third, and so that's where he stayed the bulk of the race.

But he never allowed himself a moment off the gas.

“I did not relax at any point. I knew I had to keep digging. I went hard the whole race,” Power said. “It was high-stress the whole race. It was very like our whole season. It was a very solid, consistent, no-mistake day.”

Power won just once this season at a time Team Penske notched nine of IndyCar's 17 wins, and watched from the sidelines as teammates Newgarden and Scott McLaughlin became close friends and developed a YouTube Series. Then came the last month of racing, when many believed McLaughlin gave Newgarden a win at Gateway but denied Power a similar favor last week at Portland.

He said he never felt as if he's the odd-man-out at Penske, where McLaughlin finished fourth in the final standings.

“The two boys, well, I guess they’re younger and similar in age and enjoying having fun,” Power said. "I find Scott McLaughlin a great guy, easy to get along with, and Josef is, as well. They’re good guys. Fiercely competitive, and I expect Scott to be a legit championship contender next year.

“This is the strongest combination that Penske has ever had as far as driver, speed, ability. A tough group. Tough, tough trio.”

None of the three had anything Sunday for Palou, who beat Newgarden by 30.381 seconds in a Laguna Seca record.

We gave our best, as we always do. Alex was tough to catch. I think he just was incredible," Newgarden said. "It’s been a really tough year. It’s been good in a lot of ways, but it’s also been really negative in a lot of others. I’m excited for a reset, excited to come back next year, and I know we’ve got the team to do the job.

Colton Herta, the 22-year-old Californian being courted by the AlphaTauri Formula One team, was a nonexistent 11th in what could have been his last IndyCar race for some time. Herta won the last two races at Laguna Seca from pole and there's serious interest from F1 if he can get licensed.

Christian Lundgaard, who raced last year in the Formula One ladder system, finished fifth for the Danish driver to win rookie of the year.