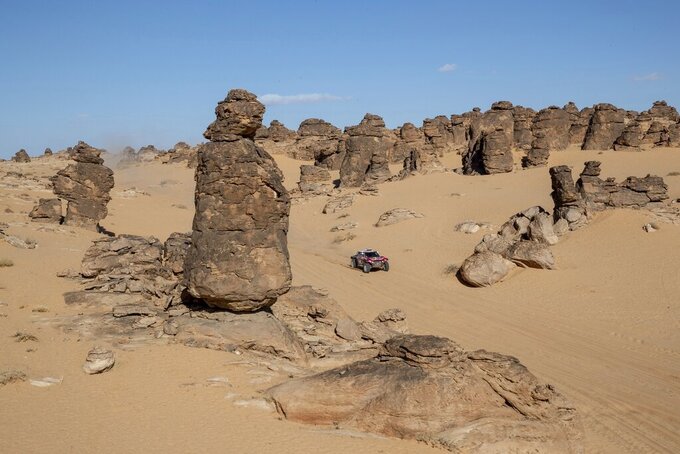 AL ULA, Saudi Arabia (AP) — Stephane Peterhansel finally made his mark on the first Dakar Rally in Saudi Arabia when he won the fourth stage on Wednesday.

The most successful driver in Dakar history, the 13-time winner overcame a flat tire and wrong turn to dominate the second part of the 453-kilometer stage, as the rally left behind the Red Sea and moved east inland to Al Ula.

"My (first-time) co-driver (Paulo Fiuza) and I are starting to communicate more serenely and accurately, it's getting better," Peterhansel said. “This new Dakar is brilliant, it has all the ingredients: superb landscapes, tricky navigation, and enough difficulties to make a selection.”

Carlos Sainz drove conservatively to be seven minutes back in third, and became the first driver to retain the lead. He was three minutes ahead of Al-Attiyah, who was penalized three minutes before the stage for not letting a competitor pass on Tuesday despite warnings.

“The last 100 kilometers were the toughest sector I've ever faced in the Dakar. It was insane,” Sainz said. “There were rocks all over the place and I could see the tracks of the bikes, it was devilish. At times like these, making it to the finish without running into trouble already feels like a win.”

Peterhansel was less than 12 minutes off the overall pace in third, and nobody else was within 23 minutes of Sainz's lead.

Jose Ignacio Cornejo of Chile was declared the motorbike winner after Sam Sunderland, who came in 11 seconds ahead, was slapped with a five-minute penalty for speeding. The British rider dropped to eighth.

Ignacio Cornejo worked with Honda teammates Ricky Brabec and Kevin Benavides to stay on course but pushed ahead right at the stony end for his maiden stage win.

“It took me 220 or 240 kilometres to catch Ricky,” Ignacio Cornejo said. “We then took turns opening the track. We did a great job, it was physically and mentally exhausting. We won't be forgetting this stage any time soon because some parts were so rocky that we thought we were going the wrong way.”

Benavides of Argentina was second, 35 seconds back. Brabec finished fifth.

Ross Branch, the stage two winner who hurt his shoulder in the third and started the fourth last, came a creditable third. Also notable was Paulo Goncalves, who lost more than 10 hours on Tuesday and placed fourth.

Brabec remained the overall leader. Benavides was 2 1/2 minutes back in second, and Ignacio Cornejo up to third.

Defending champion Toby Price, sixth on the stage, was fourth overall, 12 minutes behind.