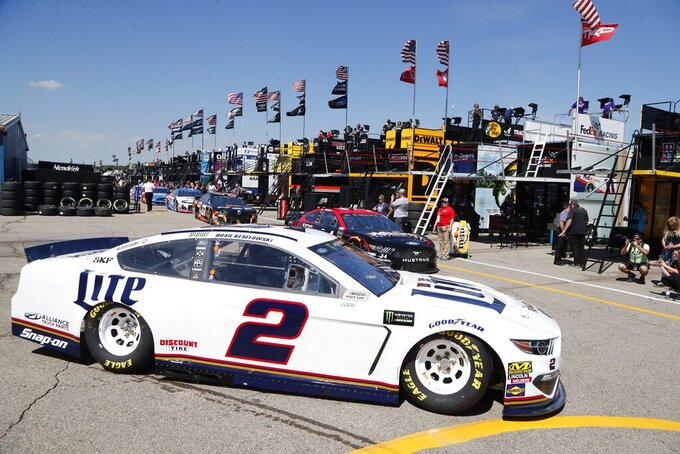 BROOKLYN, Mich. (AP) — Brad Keselowski hopes this weekend's NASCAR race in Michigan will look like the one in Kansas last month.

Easy for him to say because he won that one — but Keselowski isn't the only driver with that view.

"I think Kansas is the perfect place for this package. Here, I really hope that it'll be like that," Alex Bowman said Friday. "If this place gets hot and slick, it's going to be tough. But I think being cooler, more mechanical grip in the cars — it's one of the best shots that this package has at creating what I think is the desired effect."

This weekend is the first of the year's two Cup races at Michigan International Speedway, the latest site of the week-to-week uncertainty over how NASCAR's new rules package will impact an event. The race in Kansas was an entertaining one that included 41 green flag passes for the lead. That perhaps bodes well for the Michigan race, but the 2-mile MIS track is longer than the 1 ½-mile Kansas one, and there are other factors to consider.

The new package this year reduced horsepower and increased downforce in an attempt to offer more passing opportunities, and NASCAR can point to some encouraging stats: There have been 534 green flag passes for the lead through 14 races this season, compared to 341 at this point in 2018.

Of course, that's not the only way to measure excitement. There were 21 green flag passes for the lead last weekend at Pocono, but Kyle Busch — a critic of the new package — won in rather routine fashion. Denny Hamlin said passing was "impossible," and Busch said he doesn't think he can fully showcase his talents.

"It is definitely different," Keselowski said Friday. "It is a bit more of a chess match than it was the raw talent phase. I haven't put a lot of thought into that as of late. The reality is that the rules are what the rules are. I feel like I could spend a lot of time and energy really digesting my thoughts on all that stuff, but the reality is that I am not going to be able to change it."

There were only two green flag passes for the lead at Martinsville earlier this year and six at Richmond, but those shorter tracks are nothing like Michigan.

"I think the blessing and the curse of this sport is that we go to so many tracks in so many different cities that are laid out so much differently," Keselowski said. "Of course it creates some variation that leads to new and exciting and unpredictable things. The curse of that is that it is very hard to optimize a rules package for NASCAR and the teams that is cost effective, efficient, all those good business words, but also optimized for any given track's ability to put on the best race possible."

Sunday's race will be another chance for Keselowski to earn his first Cup victory in his home state. He was second at Michigan in August.

Keselowski said winning at MIS is "a huge item on the bucket list," so it's no wonder that he's hesitant to get drawn into a debate over the rules package.

"I want to win another championship. I want to win races like this one," he said. "I don't want to waste any of my brain space that I have available — which is very limited — thinking about things that I can't change."