IndyCar to return to Iowa Speedway for 2022 doubleheader 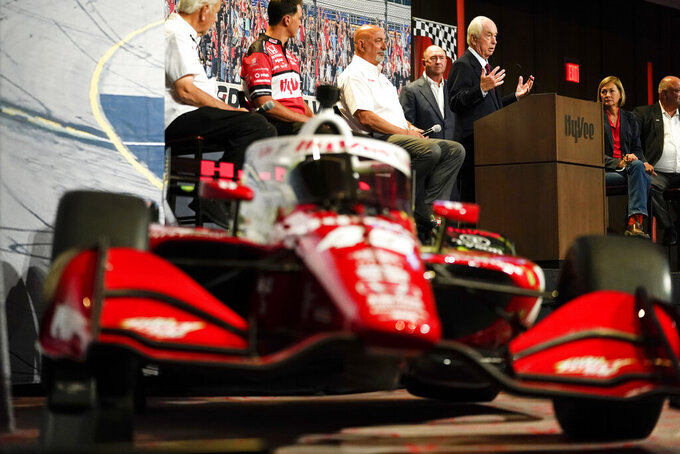 Roger Penske speaks during a news conference at Hy-Vee Corp. headquarters, Thursday, Aug. 19, 2021, in West Des Moines, Iowa. IndyCar will return next season to Iowa Speedway, a short oval track beloved by fans and drivers that had fallen off the schedule after 14 years. The track located in Newton will host a doubleheader next July in a deal brokered between IndyCar Series owner Roger Penske, team owner Bobby Rahal and grocery chain Hy-Vee. (AP Photo/Charlie Neibergall)

IndyCar will return next season to Iowa Speedway, a short oval track beloved by fans and drivers that had fallen off the schedule after 14 years.

The track in Newton will host a doubleheader next July in a deal brokered between IndyCar Series owner Roger Penske, team owner Bobby Rahal and grocery chain Hy-Vee, which is based in Iowa. The company has been increasing its presence in IndyCar as an occasional sponsor for Rahal Letterman Lanigan Racing.

Hy-Vee was named the entitlement sponsor of the July 22-23 races in Thursday's announcement attended by Penske, Rahal and Iowa Gov. Kim Reynolds.

“With our strong connection to local communities and involvement in the state, we plan to host an event that will receive national attention and make Newton an annual destination for racing fans,” said Randy Edeker, chairman of Hy-Vee.

Edeker also said Hy-Vee will be a full-time sponsor for RLL next season. The team has been trying to expand to three cars and has used Santino Ferrucci in five races and debuted Christian Lundgaard last week on the road course at Indianapolis.

He cited Formula One's growth in the U.S. in the 16-to-35 age demographic, and said he thinks IndyCar can gain similar ground under Penske.

“With Penske taking ownership, they have a lot of plans, lot of strategy to mimic some of that and bring it into the sport of racing,” Edeker said. “From a company standpoint that’s a demographic we have to do well with, need to do better with.”

Iowa Speedway opened in 2006 and IndyCar added the track to its schedule the next season. IndyCar ran 15 races at the “The Fastest Short Track on the Planet," including a doubleheader last year that Penske Entertainment promoted as the series tried to salvage its season during the pandemic.

The track, which was bought by NASCAR in 2013, dropped off the IndyCar schedule this year and likely would not have returned without a title sponsor. NASCAR pulled the Xfinity and Truck Series races from Iowa after the 2019 season and only sent its minor league ARCA Series to Newton the last two years.

Edeker said 4,000 seats will be added to Iowa Speedway before the IndyCar event next season.

Bobby Rahal has been persistent in his push to get Iowa back on the IndyCar schedule as a much-needed oval for a series heavy on road and street courses. IndyCar has just four races on three ovals this year, with the final one coming up Saturday night outside St. Louis.

“One of my main concerns when we took over the sport was we need more ovals,” Penske said. "I think that wheel-to-wheel racing makes it better. It’s just not a buy and ride. We have so much interest today without buying a ride to come to (the Indianapolis 500). We want you to be there because you earned it, because you’re a great driver and this is a great part of that piece of the puzzle that I’ve been looking for.

“To have two races and have it supported by Hy-Vee: It’s a home run on both sides.”

The 2022 doubleheader will be part of a festival-type weekend at the track located about 30 miles east of Des Moines.

The 0.875-mile, D-shaped oval has been a playground for Penske drivers. Team Penske won five of the last six IndyCar races at the track. Josef Newgarden is a three-time winner at Iowa.

IndyCar has yet to announce its entire 2022 schedule but Indianapolis, Gateway, Iowa and Texas should account for at least five oval events next year.

Penske said he hoped to have a complete schedule in the next 30 days as IndyCar figures out programming with NBC Sports. A record 13 races will be broadcast next year as part of IndyCar's new three-year contract with the network.

“This was an important piece of it, the Iowa contract,” Penske said. “Our media contract with NBC has got to be put out because we’ve got both network and cable so we want to be sure we put those to bed.”

Penske did not reveal how many ovals he expects to have on the schedule next year, but said IndyCar will run “somewhere between 15 and 18 (races) for sure.”