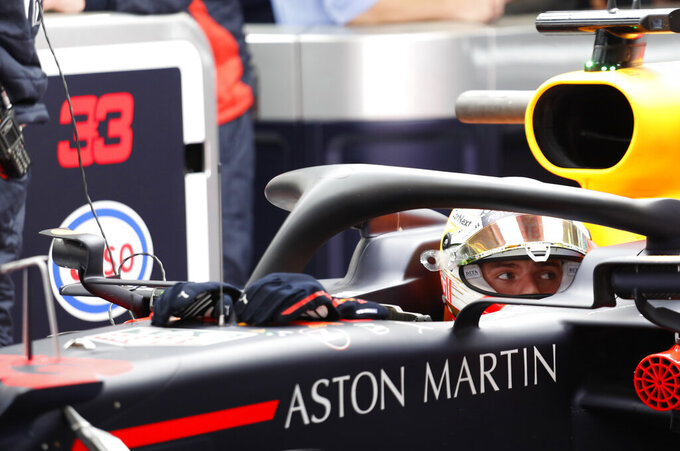 Hamilton set the top time of Wednesday's opening session’s of 1 minute, 16.976 seconds, after he took over from Bottas behind the wheel of the new Silver Arrow for the 2020 season. Bottas’ best effort was 0.337 seconds slower.

The Mercedes duo also completed the most laps of any team with 173.

Sergio Pérez of Racing Point was the third fastest, followed by Max Verstappen in his Red Bull.

Hamilton enters the season as the clear favorite as he seeks to equal Michael Schumacher’s record of seven world titles and surpass the German's mark of 91 career wins. Hamilton has six titles and 84 wins.

“It’s been a good day and a really good start for all of us, considering we had a long break,” Hamilton said. “So to come back and clock in over 170 laps just shows how hard everyone has been working over the winter."

In last year’s preseason testing, the Mercedes cars were slower than the rival Ferraris. But they beat them come the first race of the year and never lost their advantage.

Hamilton and Bottas had nine one-two race finishes last season as they dominated the field to finish first and second in the overall points standings.

Wednesday's eight hours of running went smoothly for all teams, with no accidents or breakdowns and good weather ideal for high speeds.

The only setback was for Sebatian Vettel, who couldn’t run as scheduled because of an illness.

Charles Leclerc took Vettel’s place and settled for the 11th best time of the 15 drivers who drove.

Leclerc, who finished fourth ahead of Vettel last season, said that his team had changed strategy.

“Last year in testing we were great but the first race was a little less great, and I think we have learned a few things on this,” he said. “This year we have started trying to focus more on ourselves and on trying to learn the car as much as possible during these first few days and then focus on performance later on.”

Verstappen finished third last season and is expected to again be biggest challenger to Mercedes' dominance along with the two Ferraris.

Verstappen focused on accumulating 168 laps as Red Bull’s sole driver on the track. Alexander Albon will get his turn with the Red Bull on Thursday.

Williams’ George Russell was the first car to take the track, ensuring his team got off to a better start than during last year’s preseason when its car wasn’t ready to run until the third day of testing.

This year’s rules have not varied much ahead of the massive overhaul of regulations set to take effect in 2021 with the goal of shaking up the pecking order and closing the gap between the three traditional title challengers — Mercedes, Ferrari and Red Bull — and all the rest.

This season's tweaks feature fewer tests days to compensate for the record-breaking 22 races on the calendar, including a new Vietnam GP and the return of the Dutch GP. Preseason testing has been reduced from a total of eight days to six, and the mid-season test has been eliminated.

Cars will now sport shark fins on the engine cover with the number of the driver to help fans identify them better. Drivers have been given more control of the go sequence at the starting line, and those large screens that crews would wheel out to shield cars from the view of snoopy rivals during tests have been banned.

Alfa Romeo and Haas unveiled their cars early on Wednesday in the pitlane to complete the presentation of the new vehicles for this season.

Testing continues on Thursday and Friday at the Barcelona-Catalunya Circuit, home to the Spanish GP, and again from Feb. 26-28.