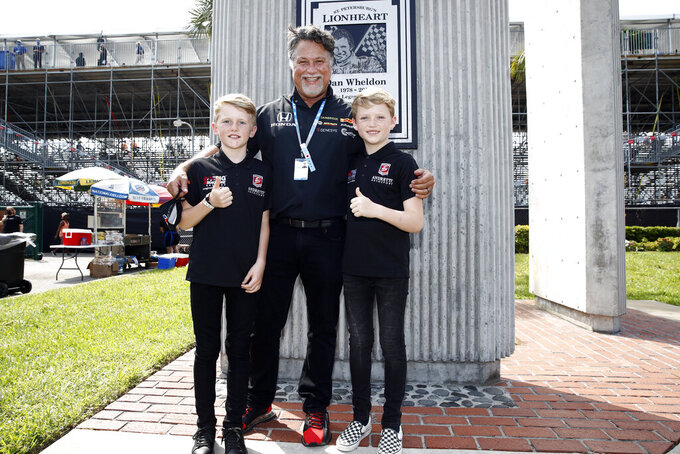 This photo provided by IndyCar, Saturday, April 24, 2021, shows Michael Andretti, center, with Sebastian and Oliver Wheldon below the monument of their late father on Dan Wheldon Way in St. Petersburg, Fla. Andretti Autosport on Saturday announced it had signed the sons of the two-time Indianapolis 500 winner to junior driver development deals. Wheldon was killed in 2011 in the IndyCar season finale, five months after winning his second Indy 500. His sons were 2 and 8 months at the time he was killed. (Chris Owens/IndyCar via AP)

ST. PETERSBURG, Fla. (AP) — Standing below the monument on Dan Wheldon Way that honors their late father, the two young sons of the two-time Indianapolis 500 winner took a big step in their budding racing careers.

Andretti Autosport introduced Sebastian, 12, and Oliver Wheldon, 10, as the newest additions to a development program as junior drivers.

“Racing runs deep in their DNA,” Susie Wheldon, the boys’ mother, told The Associated Press. “There have been many summer days where I have been sitting all day in the middle of a field in central Florida asking them ‘Are you sure this is what you want to do?’ But they do, they have a passion for it, and now they have a path.”

Dan Wheldon was killed in the 2011 IndyCar season finale, five months after he had won his second Indianapolis 500. At the time, Sebastian was 2 and Oliver 8 months old.

Michael Andretti believes in developing drivers and promoting them through a ladder system into IndyCar, the level the Wheldon brothers want to reach.

Their father won 16 races over 10 years in IndyCar, three of those seasons at Andretti. The British driver won the 2005 championship and his first Indy 500 driving for Andretti. He had completed an agreement to return to Andretti for the 2012 season the night before he died at 33 in a crash at Las Vegas.

“Dan was family to us, and we had a lot of on track success together, we see a lot of Dan in both Sebastian and Oliver and are very proud to officially welcome them into our racing family,” Michael Andretti said.

"No one will ever be able to replace Dan in their lives, but we’re happy to offer a network for mentorship to help the boys grow their careers. Karting is the first step, but we have hopes of helping foster promising Road to Indy, and eventually even IndyCar opportunities.”

Both boys were born in St. Petersburg, the city Wheldon made his American home and where he won the inaugural race through the downtown streets in 2005.

The city embraced Susie Wheldon and her sons following his death. The monument includes bricks from Indianapolis Motor Speedway, stones from his native England and the handprints of his wife and boys that were installed in 2012 along Dan Wheldon Way.

These days, the mother said, the boys are racing all the time. They were in New Castle, Indiana, last weekend and back home for the Andretti announcement Saturday. Then they headed back to Indiana for more racing. Susie Wheldon has been guiding their careers since Sebastian began driving shortly before he was 5.

“I'm exhausted. I wish I could say I was tired, but it's beyond that,” she said. “They love this. But they obviously have talent, and when you have talented kids, you need to know what to do with them and how to help them do what they love.”

For the boys, it's all about looking ahead. Each was asked about his favorite victory.

For Sebastian, it was New Castle. “Last weekend, when I won by 10 seconds,” he said.

Oliver spoke as if he's been at this for a while. “It's the next race I'm going to win,” he said.