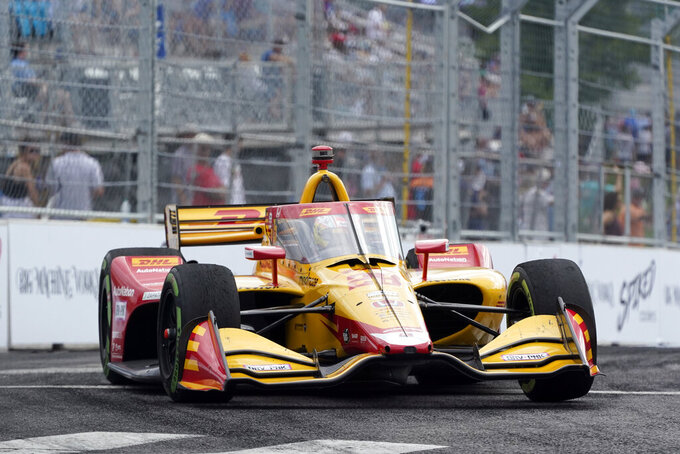 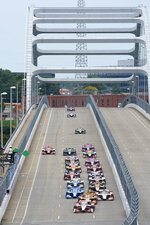 And even though he was stuck in the middle of a tight pack of drivers jostling for the championship, The Iceman never counted himself out of the fight.

Dixon passed Mario Andretti for second on IndyCar's all-time wins list with a victory Sunday in the messy Music City Grand Prix — a win that moved that seventh title within his reach. The win pushed Dixon up two spots in the standings and only six points behind leader Will Power with three races remaining.

“You're in it until you're not,” said Dixon, noting he trailed Juan Pablo Montoya by 48 points with three races remaining in his 2015 championship season.

“That's the point — you're never out of it until you are, so we'll keep digging.”

Dixon overcame a poor qualifying effort, damage to his Chip Ganassi Racing car, a crash-fest around the downtown streets of Nashville and finally a drag race against Scott McLaughlin in a two-lap push to the finish between fellow New Zealanders.

He won for the 53rd time of his career to break a tie with Andretti for second in the all-time column and now has his sights on A.J. Foyt's record of seven IndyCar titles. Foyt is also IndyCar's all-time winner with 67 victories.

McLaughlin, for Team Penske, finished second for a 1-2 finish against one of his heroes. The .1067-second margin of victory was the fourth-closest in IndyCar history on a road or street course.

“He's a legend, the GOAT,” said McLaughlin. “I've always dreamed of racing him to the finish line. That was a proper duel."

Alex Palou, the reigning IndyCar champion, finished third as Ganassi put two drivers on the podium. Palou moved one spot in the standings to fifth as 33 points separate the title contenders. On his way to victory lane, team owner Chip Ganassi stopped to congratulate Palou, the driver he is suing for trying to leave the organization at the end of the season.

It was their first one-on-one exchange since Ganassi and Palou publicly fractured over Ganassi picking up the option on Palou for next season, but the Spaniard announced he's leaving to join McLaren Racing. The outcome is now winding its way through the court system.

Alexander Rossi and Colton Herta both came back from one lap down to finish fourth and fifth for Andretti Autosport, while hometown driver Josef Newgarden was sixth for Penske.

Newgarden has had a rough stretch since crashing while leading at Iowa three races ago. He showed as the points leader before the crash, collapsed and hit his head after wrecking, and had to pass a battery of medical tests to be cleared to compete last weekend at Indianapolis.

In Nashville, he scaled back his obligations ahead of the race to be rested and able to compete for the win. Although he was the leader late in the race, Newgarden had to pit for fuel and had later contact with Romain Grosjean, who was furious with Newgarden after the collision.

“Welcome to IndyCar. It gets tight. I don’t know what to tell him,” Newgarden said about Grosjean's anger. “Let me tell you what, I about got taken out six times myself. I probably need to have some discussion with some of the younger guys, but they’re aggressive. They’re very aggressive and if you’re not aggressive back, then you get run over. That’s IndyCar racing. You’ve got to learn that pretty quick. I don’t like it, but that’s the game that we’re in.”

Pato O'Ward was the biggest loser of the race, which in its second year was slowed 10 times for 36 of the 80 laps. The start was also delayed 90 minutes for rain and lightning in the area.

O'Ward came to Nashville fifth in the standings but dropped to seventh and likely out of the championship picture with a 24th-place finish. He was drilled from behind by Graham Rahal when O'Ward slowed on the track to avoid running into Power on Lap 26.

“I only have two paddles and an emergency switch. None of it works,” O’Ward said after he was hit. “Thank you, Graham Rahal. We can’t catch a freaking break. This is a joke.”

It was an equally difficult day for defending race winner Marcus Ericsson, who was only nine points behind Power at the start of the race. But like teammate Dixon, Ericsson had a poor qualifying effort and struggled to come through the field from 18th.

He finished 14th and dropped to third in the standings. The Indianapolis 500 winner trails Power by 12 points.

Marco Andretti announced his NASCAR debut before the start of the race. He'll enter the Xfinity Series race on The Roval at Charlotte Motor Speedway on Oct. 8, driving for Big Machine Racing.

Andretti is coming off the championship in the second season of Tony Stewart's Superstar Racing Experience all-star series.

“He’s done such a great job in SRX and I think his skills will shine brightly in the NASCAR Xfinity Series,” said team owner Scott Borchetta.

Andretti will drive the No. 48 Chevrolet.

NEXT UP: IndyCar races Aug. 20 at World Wide Technology at Gateway outside St. Louis. It's the final oval on the schedule. Josef Newgarden is the defending race winner.