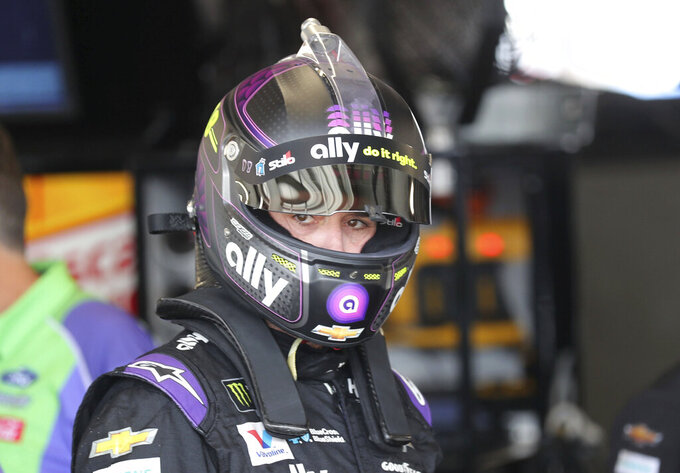 CHARLOTTE, N.C. (AP) — Rick Hendrick minced no words at the start of the season, when the NASCAR team owner dismissed the previous year as one of the worst in the history of his mighty organization. Hendrick stated: "Last year sucked. I ain't gonna do that no more."

The rebuild at Hendrick Motorsports has been slow, but the organization with 12 Cup titles is inching closer to weekly relevance. Chase Elliott won his second race of the season on Sunday at Watkins Glen to close a bold week for the team.

Hendrick made a rare midseason crew chief change for seven-time champion Jimmie Johnson at the start of last week to officially end the winless 21-race trial run with Kevin Mendeering. Johnson hasn't won a race in more than two years and new crew chief Cliff Daniels managed a 19th-place finish in his debut with the future Hall of Famer.

But the Johnson saga is just one element of a huge effort at Hendrick Motorsports to return the organization to its position as a strong championship contender. During last year's misery, Johnson went winless for the first time in his career, Elliott's three wins were the only victories for the organization and Hendrick failed to place a driver in the championship finale.

So Watkins Glen felt pretty darn good to Hendrick, who is in far better shape at this point of the season than his team was last year. Elliott's win was the third this season for the organization — Alex Bowman won at Chicago in June to lock down a spot in the playoffs — and both William Byron and Johnson are currently mathematically eligible to make the playoffs.

"I think all our cars ran pretty good, so looking forward to the rest of the races," Hendrick said for the first time in recent memory.

It was Elliott who dominated the day by leading all but 10 of the 90 laps and winning on the road course for the second consecutive year. But Byron certainly drew attention when he sparred on track with Kyle Busch. The back-and-forth began when Busch spun racing for position against Byron, and retaliated by knocking Byron into the grass.

Then Chad Knaus, the crew chief who led Johnson to all seven of his titles before he was moved to Byron's team this year, ordered the 21-year-old not to be pushed around by Busch. So Byron caught up to Busch and got even by ramming into the back of Busch's car.

Byron still needs to learn the nuances of payback because the action caused significant damage to Byron's car, but the point had been made.

"I think you have to stand your ground in this sport. If you let people push you around, they're going to push you around," said Hendrick, who was unaware until after the race that Knaus had ordered the retaliation.

"He got the worst end of the deal when Kyle brake-checked him and knocked the front end out of (Byron's) car, but sometimes in the heat of the battle you want to do things, and if you thought about it a little bit more maybe you'd just settle down and go finish the race. But in the heat of battle — and I didn't know Chad told him to — but if I'd had a radio I'd probably tell him the same thing (to retaliate.)"

Hendrick also supported the crew chief change for Johnson, which reunites him with the lead engineer from his seventh championship, in 2016. When Daniels was a traveling member of Johnson's No. 48 team, a rapport was built that Johnson lacked with Mendeering.

Sitting 16th and last in the playoff standings, Johnson doesn't have a ton of time to turn his season around and bringing Daniels back to the pit box was the clear solution.

"They have a chemistry together ... the communication, knowing what Jimmie likes," Hendrick said. "I think it gave Jimmie some comfort. Kevin is one of the smartest guys in the garage, but you can't replace time and years together, and I think that's all Jimmie wanted. So I think it's going to work out. Cliff is a sharp young guy."

Hendrick Motorsports has a long way to go before it is consistently racing for wins each week and developing multiple title contenders. Elliott has carried the banner the last two seasons, and getting him into the title race is going to require advanced behind-the-scenes work at Hendrick's sprawling campus. The owner said he wasn't going to put up with another lousy season, and now that the organization has turned a corner, the boss can't stop pushing in his quest to recover from last season.

"I think Chase has shown that he can win at any track. He's really good with equipment, doesn't tear up anything," Hendrick said. "I think if we can get the car good enough for Chase, he can win a championship, and he can win it this year. So we'll just have to keep tuning on the car and giving him good stuff."