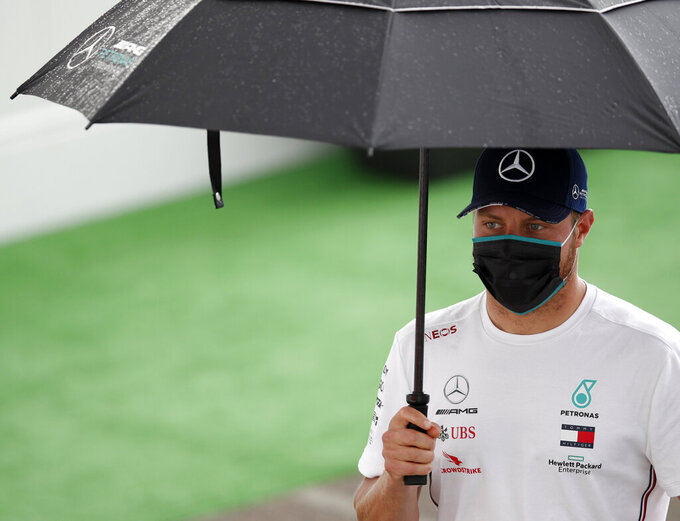 Mercedes driver Valtteri Bottas of Finland arrives at the paddocks for preparations before the practice session prior to the Formula One Grand Prix at the Barcelona Catalunya racetrack in Montmelo, Spain, Friday, Aug. 14, 2020. (Alejandro Garcia, Pool via AP) 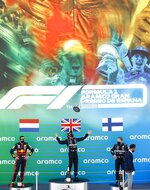 Valtteri Bottas is at a loss to explain why his latest Formula One title challenge is fading even faster than it did last season.

The Finnish driver vowed that he could challenge Lewis Hamilton for the world championship this year, as he said last year. But after six races he is already 43 points behind Hamilton, and Red Bull's Max Verstappen has leapfrogged Bottas into second place in the standings.

“It's far from ideal ... (the gap is) way too big and I can see again the championship drifting away,” Bottas said. “I don’t know the reason for now. At this point it’s difficult to say, maybe when time goes on I can say. But for now, no, I have no answer."

Bottas won the season opener in Austria from pole position and has pushed Hamilton closely in qualifying.

“I had a good start in the first race and the pace (in) every single race,” Bottas said. “Qualifying has been super-close every single time with Lewis. Small margins.”

But on the track, those small margins have expanded as Hamilton has reaffirmed his superiority over his teammate.

“Honestly I don't (know why). At this moment I can't say," Bottas said. “There were a couple of (expletive) races for me in Silverstone, with bad luck.”

Bottas scored no points at the British GP on Aug. 2 because his tires shredded near the end, while Hamilton only punctured his tire on the last lap and he managed to hold on for victory.

But despite that particular incident of bad luck, the way Bottas' challenge is fading is all too familiar.

Bottas led Hamilton by one point after four races last season, having won two of them, but was 17 behind after the sixth race. His season started unraveling as Hamilton pulled away to a sixth title and Bottas ended up a whopping 87 points behind the veteran British driver in second place.

With 11 races left this season, the gap could become colossal unless Bottas finds a way to turn things around, starting at Spa on Sunday.

A win for Hamilton, meanwhile, would move him onto 89 victories overall and just two behind Ferrari great Michael Schuamcher's F1 record. Hamilton is also odds-on favorite to match the German driver's record of seven F1 titles.

The seven-kilometer (4.3-mile) track cuts through the thick Ardennes forest and is one of most iconic in F1, with its long straights and famed corners such as Eau Rouge. It is known as a power circuit, with about 65% of the race spent at full throttle, yet Mercedes has not won the past two races.

Those went to Ferrari, with Charles Leclerc dedicating his win last year to Frenchman Anthoine Hubert — who died the day before after a heavy crash in a F2 race.

Hubert’s mother and brother held his racing helmet in their hands as teams and drivers stood alongside them with heads bowed in the paddock before the F1 race. After his victory, Leclerc pointed to the sky in memory of his fallen friend.

“Spa-Francorchamps has a special place in my heart,” Leclerc said. “While it is here that I took my first win, it is also where we lost our friend Anthoine last year. He will be in our thoughts.”

Frenchman Pierre Gasly, who drives for the AlphaTauri team, knew Hubert from an early age.

“We were in the same school together organized by the French motor sport federation, from when I was 13 to 19, and we shared an apartment for six years," Gasly said. “I think everyone in the paddock will take time to think of him.”