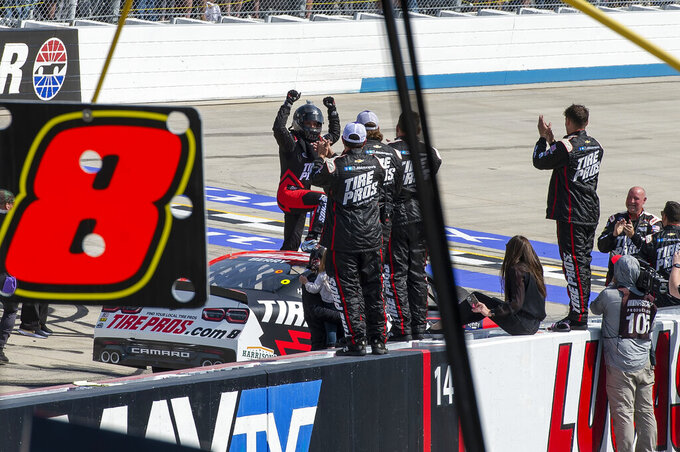 DOVER, Del. (AP) — Josh Berry led a dominant outing for JR Motorsports at Dover Motor Speedway and raced to his first NASCAR Xfinity Series victory of the season on Saturday.

Berry had tears in his eyes and hoisted his daughter in the air after he took the checkered flag in the No. 8 Chevrolet for his third career Xfinity win in 39 starts. Berry finished second in last year's Dover race.

“We were there when it counted, man,” Berry said.

“It's big for our company,” Gragson said. “Four cars in the top five is really big for us.”

“I feel like Happy Gilmore with these things,” Gragson said, holding the oversized check.

“Being a @XfinityRacing owner is never dull,” he tweeted.

“Lots of happy @JRMotorsports employees the past few weeks. Also appreciate @TeamHendrick for all their support. Pit crews, engines, multiple layers of resources from Mr H and his organization help us win,” Earnhardt tweeted.

They'll certainly be abuzz in the shop this week at JR Motorsports: Gragson joked part of his bonus usually goes toward beer money. Then again, the track is just a short walk from the Dover casino.

He also joked he was going to steal Berry's Monster trophy: “That thing's so cool.”

“We thought after last year this would be a great opportunity for us,” he said. “We were able to deliver that today.”

Daniel Hemric finished a solid 11th driving with a broken bone in his left foot suffered last week in a wreck at Talladega.

Berry was the sixth straight different winner at Dover -- and all of them raced for the Xfinity championship in the season finale. Berry led the final 55 of a rather uneventful 200 laps.

“I think all four of us are working really together. We had a lot of great speed,” Berry said.

Pole sitter Brandon Jones finished seventh. AJ Allmendinger, who finished sixth and has a top-10 finish in every race this season, leads the standings by 43 points over Gibbs.

“Not a lot of chaos out there, which is making my life a little easier this week,” Gibbs said.