AUTO RACING: NASCAR in Cali; F1, IndyCar back in action 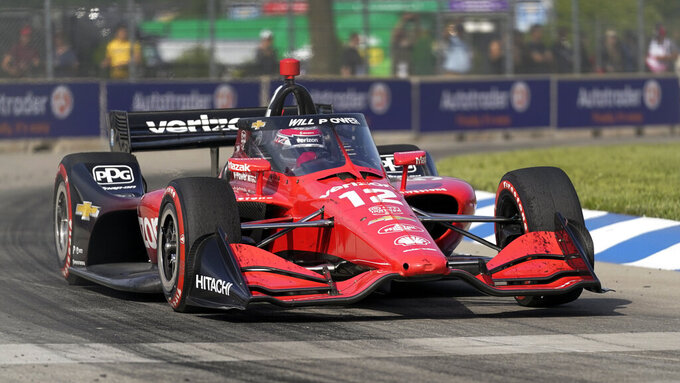 Fast facts: Logano joined Ross Chastain, William Byron and Denny Hamlin as the only multiple winners through 15 events. All four have won twice. ... Busch went from third to second in the points race and trimmed his deficit from 37 points to nine behind Chase Elliott. Chastain dropped to third, 17 behind. ... Busch leads all drivers with 11 top-10 finishes, two more than anyone else. ... Hamlin is the lowest-ranked race winner, 19th and 188 points back of Elliott.

Last race: Polesitter Corey Heim regained the lead on the first lap of overtime in Illinois and won for the second time in six series starts this year.

Fast facts: Heim joined three-time winner Zane Smith as the only multiple race winners through 11 events. ... Defending series champion Ben Rhodes climbed into first in the point standings, 17 points ahead of Chandler Smith, 21 ahead of Zane Smith and 22 clear of former leader John Hunter Nemechek. ... Heim's victory was the fourth by a non-regular in the series this season.

Last race: Perez of Red Bull won a rain-marred race at Monaco for his first victory of the season and fifth for the team in seven races.

Fast facts: Perez signed a two-year contract extension two days after his Monaco victory. ... Perez is third in the point standings, 15 behind Red Bull teammate, four-time winner and defending series champion Max Verstappen and six behind Charles LeClerc. ... The top three have combined to win all seven races run thus far. ... LeClerc has won the pole in five of the seven events.

Last race: Will Power rallied from 16th and closed the Belle Isle era with a Team Penske victory that also moved him to the top of the driver standings.

Fast facts: Power's victory was his first of the season, his third in Detroit and the 100th for Chevrolet since it returned to the series in 2012. ... Power leads Indy 500 winner Marcus Ericsson by three points for the series lead. He's finished lower than fourth just once through seven races. ... The race is moving next year from the island that has hosted the event since 1992 back to the downtown course in Detroit that once hosted Formula One.