AlphaTauri says 2023 seat will likely go to Gasly or Herta 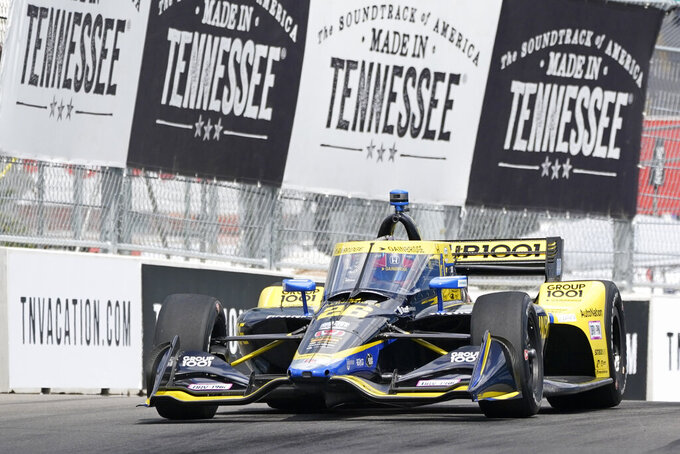 AlphaTauri is awaiting a decision from the FIA on Colton Herta's eligibility to compete in Formula One next season, and it said Saturday the delay is affecting the team's planning for its 2023 lineup.

Pierre Gasly is currently under contract to AlphaTauri via a deal with Red Bull, but Alpine would like the Frenchman to fill the seat opening when Fernando Alonso leaves at the end of the season. It would require McLaren to release its F1 rights to Herta, the 22-year-old Californian seeking to become the first American on the F1 grid since Alexander Rossi in 2015.

Herta does not have the required Super License needed to race in F1, so any deal is contingent on an FIA ruling.

“The latest on Pierre is that he has a contract with us,” AlphaTauri team principal Franz Tost said Saturday ahead of the Italian Grand Prix. “And regarding Colton Herta, it’s a decision from the FIA whether he gets the Super License or not, and I hope that FIA will take this decision as soon as possible so that we know how to build up the team and where to go for next year.”

Tost was then asked if AlphaTauri might look into the Red Bull junior driver academy for a replacement for Gasly, or if F2 driver Liam Lawson might be in the mix. AlphaTauri is the junior program for Red Bull, and Tost indicated a driver decision will come from above and be either Gasly or Herta.

“This is a decision from Red Bull, which driver they will bring into the team,” Tost said. “But I think if it’s not Colton Herta, then Pierre Gasly will stay and nothing will change.”

But any hope of Herta receiving an exemption on the Super License — and Herta said Friday he'd prefer to earn the license and not receive an FIA exemption — seemed to be waning in discussions happening in Italy.

Ferrari principal Mattia Binotto was clearly against any sort of exemption for Herta.

“I think force majeure cannot be used for Herta. That will be a completely wrong approach,” Binotto said. "Regulations are in place in order to protect our sports and make sure that we’re making the right process and choices for our sport itself. So Herta may participate in the championship, (when) he’s got what are the requirements to do so and not differently.

“I think that’s very important and we will certainly overview what FIA will do in that respect. And I think each single team will do so because it’s for the importance of our sport. We cannot have force majeure or whatever are the situations, which is not a force majeure, certainly in that case.”

An FIA spokesman then told Motorsport.com that "the FIA will not be pressured by any teams into decisions on matters such as Super License points. The FIA President has implemented robust governance, and we will abide by that.”

Herta lacks the required points for a Super License because of how little the FIA values IndyCar, a series it does not govern. IndyCar's worth falls somewhere between F2 and F3, both junior categories filled somewhat by wealthy ride-buyers. When Indy Lights driver Linus Lundqvist starts Saturday's race he will clinch the Lights title and earn a Super License.

Lundqvist's points come via the 15 points for the Lights title, 10 points for finishing third in Lights last year and his 2020 victory in the FIA-governed Formula Regional Americas Championship earned him 18 points.

The 23-year-old Swede will have 43 points at the end of Saturday. Herta, winner of seven IndyCar races over four seasons and the series' youngest winner with his 2019 victory days ahead of his 19th birthday, will end the season Sunday with 32 points.

Herta can acquire additional points by running in first practice sessions, but there are only six F1 races remaining after Italy, so even that path would leave Herta two points short.

“There’s a regulation and if the FIA wants to change anything, then this is one side,” Tost said. “We, from our side, will support it of course. If it’s necessary to run in FP1 then we will run him in FP1. We will do everything what is being requested.”

Herta is managed by his father, former IndyCar driver Bryan Herta, and the two were in full preparations at Laguna Seca Raceway in California for the young driver to go for his third consecutive victory on the road course.

Bryan Herta said he was choosing his words carefully when discussing his son's potential opportunity.

He also said his son has “strongly resisted” being updated on the ever-changing developments because he wanted to focus on the close of the IndyCar season. This year has been his worst with just one victory and he's ranked a career-low ninth in the IndyCar standings.

But Bryan Herta also noted all the debate coming out of F1 has made it “uncomfortable” for the Hertas.

“Team owners, the drivers over there, making this specific to Colton,” Bryan Herta said. "I think that can be a little uncomfortable and I don't think he wants to go there like some kind of special case. I think he wants to take a chance on Formula One and I believe he is good enough to deserve that chance.

“But you also don't want to go over there with an asterisk walking in. So I've been a little surprised by how contentious and how public the whole thing has been. I'd rather it just be settled quietly and that's it.”

Bryan Herta added he's unsure what sort of licensing his son has that could potentially permit him to end the IndyCar season and quickly enter some FIA-approved series in an attempt to collect some quick points.