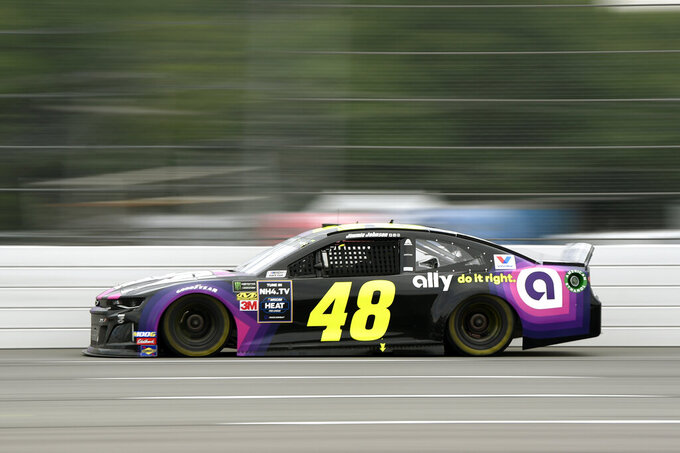 On the brink of missing the playoffs for the first time in his career, seven-time NASCAR champion Jimmie Johnson is moving on to another new crew chief in the hope of reversing a serious slide into irrelevance.

Johnson's bid to snap a tie with Dale Earnhardt and Richard Petty for career Cup titles is on the backburner for now, the immediate goal becomes simply making NASCAR's postseason.

Hendrick Motorsports on Monday made its second big shake-up in months atop Johnson's pit box and replaced Kevin Meendering with Cliff Daniels. Daniels will call the shots starting with Sunday's road course race at Watkins Glen International in New York.

"We have to act now," Johnson said. "We don't have any time to waste."

Johnson won seven championships with crew chief Chad Knaus over 17 years before they split up after last season. Meendering failed to steer Johnson into victory lane, and the former champ is 12 points out of the 16-driver playoff field with five races left before the cutoff.

Johnson, who turns 44 in September, has 83 career victories but none since June 2017 at Dover and is mired in easily the longest losing streak of his career. He finished 15th in the No. 48 Chevrolet on Sunday at Pocono Raceway in Pennsylvania. He has just three top-five finishes this season and eight top 10s.

"We have great confidence in Cliff's ability to win races with Jimmie and the team," team owner Rick Hendrick said. "He's a natural leader and tremendously talented from both a technical and communication standpoint. Cliff's familiarity with Jimmie and the No. 48 team culture will benefit us a ton. He will bring the spark that's been our missing ingredient."

The 31-year-old Daniels was Johnson's race engineer on the 2016 championship team. He moved into Hendrick Motorsports' competition systems group following the 2018 season and rejoined the No. 48 team as race engineer last month at Sonoma Raceway, a sign that potential changes were being considered.

"There was just such a spark that he brought," Johnson said. "I noticed, outside people noticed, I think our fans have even noticed. Management noticed. It's just something that we felt like we needed to pursue to give ourselves the best chance to make the playoffs and have a chance at eight this year."

Meendering will remain with Hendrick Motorsports in a senior competition role. He got just 21 races with Johnson; Knaus had 604.

Daniels said he "picked up where we left off" once he was reunited with Johnson and believes the team is capable of making a serious push for that eighth championship. Johnson won a stage at Pocono for the first time this season and only the second time in the three seasons since NASCAR implemented the manufactured breaks.

"I also know I'm part of the problem on why the car hasn't had the success it's accustomed to having," Johnson said. "I don't think I am the problem. But I am part of it and part of the solution."

Johnson has not missed NASCAR's playoffs since the format was instituted in 2004.

"Being able to work with Chad and with Jimmie, the level of professionalism that this team has always had has taught me quite a bit," Daniels said. "Just in procedures and flow and the dynamic that you need be operating at such a high level and to be successful doing that."