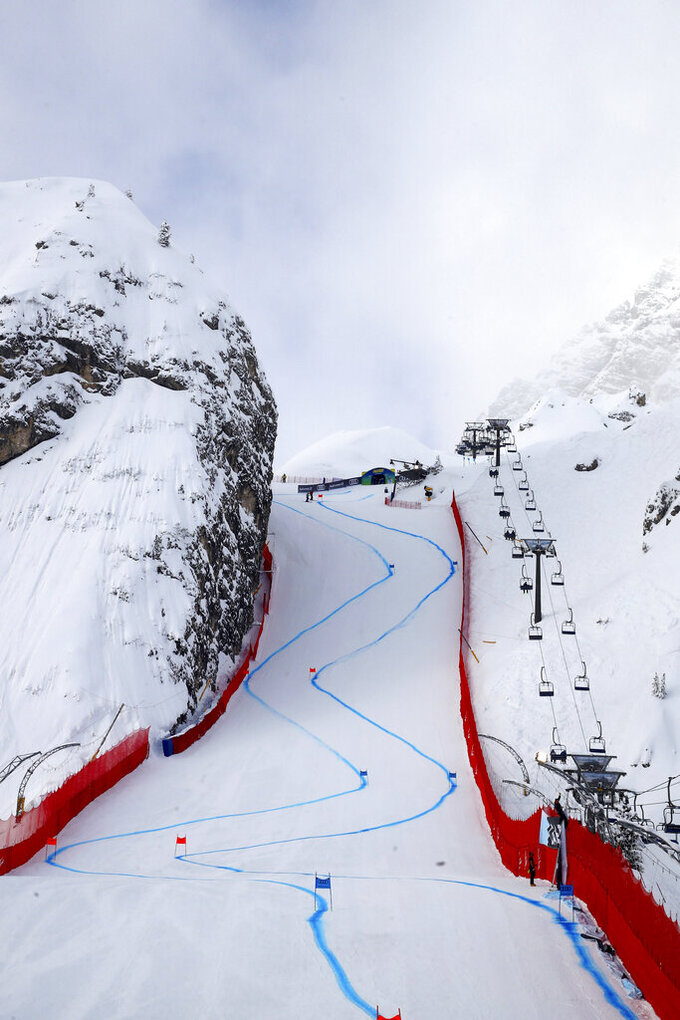 In this photo taken on Feb. 9, 2021, a view of the Tofana Schuss, in Cortina d' Ampezzo, Italy. The Tofana schuss, a chute between two huge cliffs of sheer rock, is the signature section of the women’s downhill at the Alpine skiing world championships. (AP Photo/Alessandro Trovati)

When racers soar through the air off a huge jump between two massive walls of rock outcroppings on Cortina’s spectacular Olympia delle Tofane course, though, it’s hard to miss.

The Tofana Schuss is the signature section of the women’s downhill to be contested on Saturday at the skiing world championships.

The schuss, or chute, comes about 20 seconds into the downhill.

Following a hard left turn, racers ramp to 135 kph (85 mph) as they dive down into the shady schuss and have to shift back to the right as they go over a jump.

“It’s like Formula One on skis — truly fast,” Austrian contender Tamara Tippler said. “Your helmet whistles and that’s such a cool feeling. You just want to go faster and faster and get into the flow.”

The skiers' speed when they emerge back into the bright sunshine is often the key to victory.

Italian standout Sofia Goggia was fortunate to come away with only a bruised psyche after failing to land her jump through the schuss in 2018.

“It’s honestly one of the most spectacular parts of any speed track that I’ve ever raced on,” said Cortina record-holder Lindsey Vonn, who won 12 times in the resort known as the “Queen” of the Italian Dolomites.

“For the women’s side you don’t always get those really scenic and spectacular sections. So the fact that we have something like that is really amazing.”

The jump was added to the schuss midway through Vonn’s career.

“It used to be this round transition that wasn’t as hard. And now they kind of built it up to be a jump, which is awesome. You pick up so much speed in such a short period of time and that’s one of my favorite parts, because I love going as fast as possible.

“And it’s usually really bumpy, so you’re just trying to stick your nose in there as much as possible."

For super-G, the race starts directly at the top of the schuss, slinging skiers on a zig-zag seemingly into the rocks.

Downhill is where the high speed comes into play.

“It’s this moment where you come in with confidence and then you kind of get in your tuck and accelerate and it’s really about that acceleration,” said Breezy Johnson, the American who is second in the season’s downhill standings.

“In inspection it’s also really fun to look around. I’ve seen coaches on both cliff sides, literally rock climbing to get the perfect angle.”

Organizers perform wonders just to get the safety netting in place along the rock walls.

“There’s nothing quite like it,” U.S. coach Paul Kristofic said. “It’s very unique and challenging to build for the race organizers. But it’s a tradition here and they figured out a way to do it.”

After the schuss, it’s pedal to the metal all the way down.

“The keys are to really capitalize on the steeps, be as clean as you can on that grippy snow,” Kristofic said. “You can’t slide the skis at all. It’s pretty high speed everywhere so aerodynamics are super important everywhere.

“You really try to make sure you hit all of those key spots, especially in transitions from steep to flat, that you’re hitting it clean and really finding fall line everywhere you can, really pushing turns deep and covering as little distance as you can on the cleanest ski you can.”

Organizers did not incorporate the schuss into the new men’s downhill course that runs alongside the Olympia delle Tofane.

“They should have found a way to start up there and cut over,” Vonn said. “Their side is proving to be very challenging, just not as scenically spectacular as the women’s side.”