William Byron penalized for hit on Hamlin that NASCAR missed 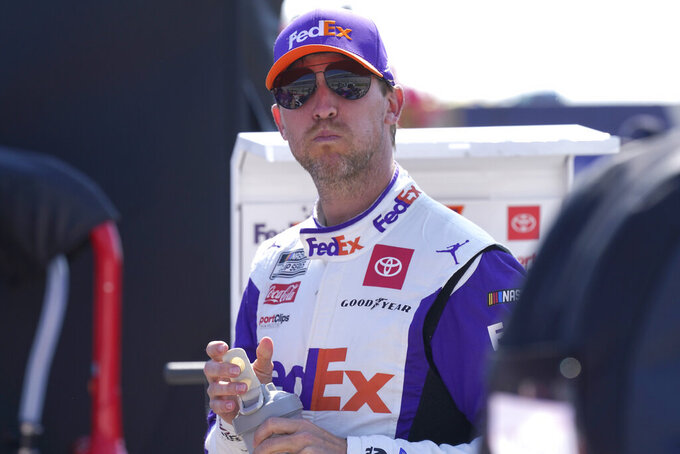 The penalty dropped Byron to eight points below the cutline heading into Sunday's race at Talladega Superspeedway in Alabama. The Hendrick Motorsports driver had been 17 points to the good, and third in the standings, before the penalty.

Gibbs was racing off pit road when he retaliated against Ty Dillon, who had nearly collided with Gibbs as he Gibbs was pulling out his pit stall. After swerving to avoid Dillon, Gibbs attempted to door-slam Dillon and pushed Dillon’s car close to a NASCAR official on pit road.

The Gibbs incident drew a larger monetary fine and a Tuesday apology from Joe Gibbs' grandson.

“I have to have a better understanding of the situation and my surroundings,” Gibbs wrote on social media. “I'm thankful no one was injured and will learn from it.”

It was Byron's spin of Hamlin that heavily tarnished Sunday's race at Texas. Byron was admittedly angry after being squeezed for track position by Hamlin, and he retaliated by spinning Hamlin under caution.

“He ran me out of room. We’re lucky we finished,” Byron said after the race. “I went to go show my displeasure. I didn’t mean to hit him and spin him out.”

Because of the spin, NASCAR dropped Hamlin in the running order for the ensuing restart despite desperate pleas from Hamlin and his Joe Gibbs Racing team.

“I guess we can just wreck each other under caution," Hamlin complained after finishing 10th. Byron finished seventh.

After the race, NASCAR admitted it did not see Byron spin Hamlin from its perch in the scoring tower. That incensed Hamlin and other veteran drivers, who noted all the in-car camera angles, available technology to NASCAR and the massive video board inside the Texas infield that showed multiple replays of the incident during the caution period.

Hamlin moved from sixth to fifth in the standings with the penalty to Byron. Four drivers will be cut from the 12-driver field after next week's race in Charlotte.