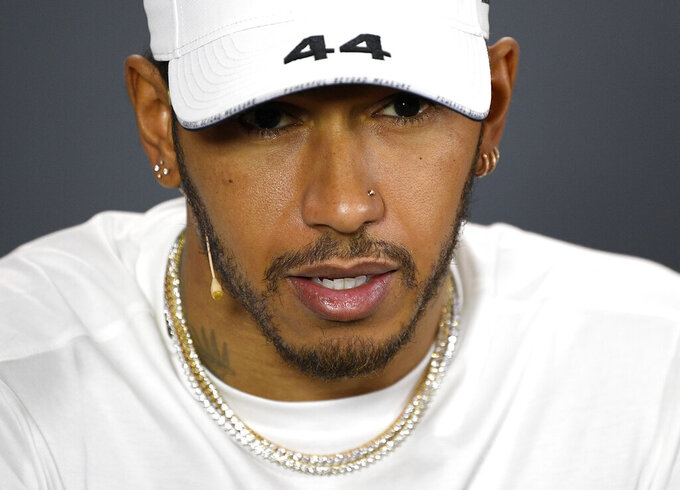 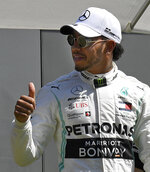 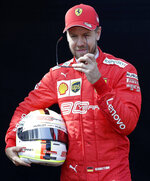 MELBOURNE, Australia (AP) — The sudden death of race director Charlie Whiting set a somber tone for the first weekend of the Formula One season, with the attention to the regular rivalries such as Lewis Hamilton vs. Sebastian Vettel taking a back seat to the incoming tributes for the respected F1 veteran.

A day before the first practice session for the season-opening Australian Grand Prix, F1 drivers, officials and fans were shocked to learn that a man described as a "faithful friend and a charismatic ambassador" for the sport had died of a pulmonary embolism in Melbourne at the age of 66.

Five-time world champion Lewis Hamilton said the ever-diplomatic Whiting was an icon of the sport, and four-time champion Sebastian Vettel said the Englishman was the perfect middle man between the drivers and F1 regulators.

Daniel Ricciardo said the drivers sometimes tested Whiting's patience, "but you always felt like he was on our side."

"He did a lot for the sport," Ricciardo said. "I'm sure we'll all race with a lot of passion this weekend. It's a reminder we're all very lucky to be in this position."

The drivers spoke at a news conference that had been scheduled to officially mark the start of the first weekend of the F1 season, but started by formally acknowledging the England-born Whiting's influence on the sport which he joined in 1977 as a mechanic and progressed through the ranks.

Eventually, the focus turned back to racing.

BIG QUESTIONS FOR THE SEASON

Can Sebastian Vettel, who has finished second in the drivers' championship for the last two years, and his new Ferrari teammate Charles Leclerc challenge Hamilton in his Mercedes?

How competitive can Ricciardo be since switching to Renault after five seasons at Red Bull, where Max Verstappen is now partnered by Pierre Gasly?

Vettel won the Australian and Bahrain GP races to open 2018 and finished with five victories in a season that ended with Hamilton completely dominating with seven wins in the last 10 races to finish the year with 11 wins from 21 starts. It was his fourth drivers' title in five years in a Mercedes, and his fifth overall.

His teammate Valtteri Bottas had seven second-place finishes last year and didn't win a GP, but Hamilton said the team wouldn't be playing favorites in Melbourne or anywhere else.

"We have a great pairing. It's worked well for years, so no reason to change it," he said. "We're free to race like every single year — that's been said from the beginning ... that's how I like it."

The Mercedes team is aiming to match Ferrari's record (1999-2004) with a sixth consecutive constructors' championship, and set the outright mark by producing a sixth straight drivers' champion.

Ferrari has been the early pace-setter in the last two seasons, with Vettel winning in Australia in 2017 and 2018.

He thinks the car is even better prepared this time around.

"Yeah, quite frankly because last year's winter testing didn't go well for us," he said. "We had some issues with the car to fix. We got a bit lucky with the race last year ...and grabbed the win."

Vettel has a new teammate this year after 2007 world champion Kimi Raikkonen moved to Alfa Romeo Racing, the new name for the Sauber team for which he made his F1 debut in 2001.

Raikkonen placed third in the drivers' championship last year with 12 podium finishes for Ferrari, including victory in the U.S. — his first GP win in five years. The 39-year-old Finn hasn't entirely ruled out another podium result.

"There is always some uncertainty when you head to the first race of the season — you could even call it a mystery," he said. "Anything is possible. The team has shown massive development and I am confident that we can have a strong start in Melbourne."

Williams is hoping an inspirational comeback by Robert Kubica can turn around its fortunes after failing to get anyone onto the podium in 2018 and finishing last in the constructors' championship.

The 34-year-old Kubica hasn't raced in F1 since 2010 following a rally crash that almost severed his right arm. Williams has modified his car to cater for his predominantly left-handed steering.

Regulation changes for 2019 will mean wider front and rear wings in the aerodynamic packages designed to make the cars earlier to follow and overtake.

Ross Brawn, the F1's managing director for Motorsport, said the changes should enable drivers to race closer together, which should increase the quality of racing.

Drivers have three practice sessions to get to grips with their cars before qualifying Saturday for Sunday's race.