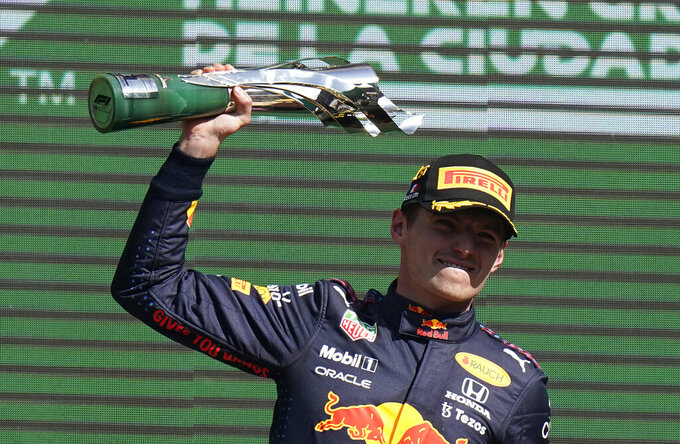 MEXICO CITY (AP) — Red Bull earned itself one heck of a Formula One fiesta.

Max Verstappen won the Mexico City Grand Prix with a dominant race Sunday to stretch his season championship lead over Mercedes driver Lewis Hamilton. Teammate Sergio Perez was the first Mexican driver in race history to not just lead the race, but also to earn a podium when he finished third.

And the result pulled Red Bull nearly even with Mercedes in a team championship worth millions of dollars at the end of season.

While Verstappen and Perez basked in the chants of “Olé! Olé!” from the massive crowd during the podium ceremony and Perez’s father wildly waved the Mexican flag, Hamilton could only watch and listen.

He had to know he's running out of time and races to catch Verstappen in pursuit of a record eighth F1 season title.

Verstappen now leads Hamilton in the championship by 19 points with four races left, starting next week in Sao Paolo, Brazil. Verstappen won in 2019 and likely will be favored to again.

The two have traded the lead several times this season, and even crashed into each other twice, in F1's tightest title chase in years.

“Today with their superior speed, if they work to carry that into the next ones, we may be in trouble, or we will be in trouble," Hamilton said.

Verstappen certainly isn't taking anything for granted. The 24-year-old Dutchman is chasing his first F1 championship and earned his ninth win of the season, his second in a row and third in Mexico City in four years.

“I don’t believe in momentum,” Verstappen said. “Every single race we have to nail the details. ... Its going to be really tight and exciting through to the end.”

Hamilton and teammate Valtteri Bottas pulled a big surprise in qualifying when the Mercedes cars earned their first front-row lockout of the season. Bottas was on pole to start, Hamilton second and Verstappen and Perez in third and fourth.

Their advantage last only a few seconds.

Verstappen bolted off his line and used the slip stream behind Bottas on the long starting straighaway to snatch the lead by the first corner. Bottas got tapped by McLaren’s Daniel Ricciardo and his car spun, dropping him to the back.

That left Hamilton in a Red Bull sandwich: Verstappen in front and Perez right behind, with Bottas no longer in play to help him defend his position.

“I went from third to first and it basically made my race,” Verstappen said.

Even if Mercedes had held position early, Hamilton likely would not been able to hold on to win. He had suggested Saturday the Red Bull cars would be too fast to deny over a long race.

The pass just happened a lot faster than anyone at Mercedes would have liked. Mercedes Team Principal Toto Wolff was annoyed after the race that Verstappen was able to make the move so easily. And by getting knocked to the back, Bottas finished 15th.

“We had two cars in front and seemed to open up the sea for Max to come around the outside," Wolff told Sky Sports F1. “And even so, even with the spin afterwards (and) a complete loss of points, it could have been a third or fourth place. It is annoying to say the least.”

Verstappen was soon zooming off into the distance. That left Hamilton playing defense against Perez in a desperate bid to hold on to critical championship points needed to keep Verstappen within sight in the title fight.

The home crowd roared when Perez briefly led after Hamilton and Verstappen pitted for new tires. He pulled within striking distance of Hamilton in the final laps but couldn't make the final move to pass him for second. Perez instead settled for a third straight podium finish for the first time in his career.

“Now it's time for some tequila!” Perez told his team at the finish.

“Being on the podium in your home grand prix is something very, very special,” Perez said. “Today, I wanted more. I wanted to win the race ... At the end of the day, we are so competitive, we finish third (and) we really don't enjoy. Today is one of those days that I must enjoy.”