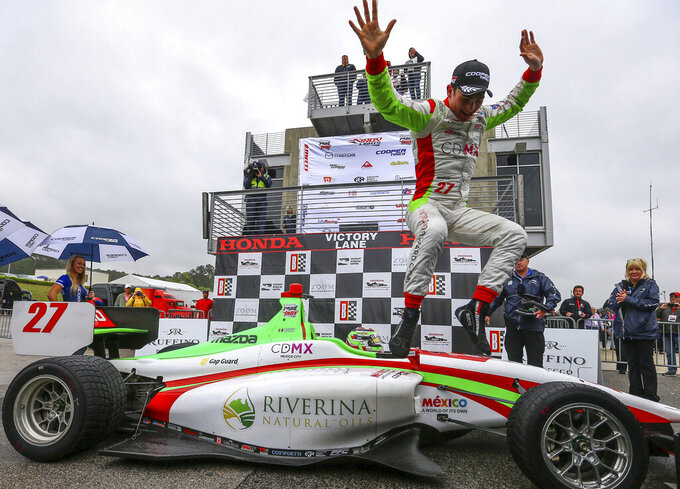 CHARLOTTE, N.C. (AP) — From the moment McLaren said it was teaming with Sam Schmidt's IndyCar team, all participants stressed that popular veteran James Hinchcliffe would be part of the team in 2020.

Then a pair of young drivers became available and the Canadian was unexpectedly dumped from his ride. Arrow McLaren SP officially named Indy Lights champions Pato O'Ward and Oliver Askew as its drivers for 2020 on Wednesday.

Hinchcliffe began driving for Sam Schmidt in 2015, the year he nearly bled to death when a part on his car broken in a crash at Indianapolis Motor Speedway pierced his leg. He is under contract to the team but being replaced by 2018 Lights champion O'Ward. Askew sealed a deal to replace Marcus Ericsson in the second seat after wrapping up this year's Lights title.

"James Hinchcliffe has concluded his IndyCar racing duties with the team," the team said. "While James will cease racing for the team in 2020, he remains under contract with Arrow McLaren SP but is free to seek and secure alternative options."

Hinchcliffe was already in a bind because of his ties to Honda and personal services agreement as a spokesman. But Honda won't work with McLaren because of a bitter breakup in Formula One, so the existing Schmidt team will move to Chevrolet in 2020. That move was going to cost Hinchcliffe significant money, but he was committed to staying with the team and had repeated public assurances from co-owner Schmidt and McLaren CEO Zak Brown that Hinchcliffe would be back.

Instead, O'Ward gained a release from Red Bull Racing that made the 20-year-old available to join the 22-year-old Askew in what will be the youngest team in the IndyCar paddock. Hinchcliffe learned he was out Sunday night. As a driver under contract with no reason to believe he'd be released, Hinchcliffe was not part of the active free agent market and now finds himself scrambling for a job with very few seats available. Ericsson knew he was out as soon as McLaren came aboard and the Swede landed a seat with Chip Ganassi Racing, one of the top teams in IndyCar.

"It's a gut-wrenching decision, but we were faced with an opportunity to pick up these two young guns coming out of Indy Lights that already have 13, 14, 15 years' worth of experience and it was just an opportunity that we couldn't pass up," Schmidt said. "So everything's amicable, I have all the faith in the world that James is going to wind up in a fulltime ride. It's just a competitive environment and for our partners and everything else ... it was a group decision, we got an opportunity in front of us, we got to take it, we want to go win races."

Hinchcliffe won three races for Schmidt, including the prestigious Grand Prix of Long Beach, and won the pole for the Indianapolis 500 the year after his near-fatal accident. He had just one podium finish this past season and finished 12th in the final standings.

Hinchcliffe has not commented since he learned he was out of a ride. There's not much out there for him, but Schmidt did not envision the 32-year-old Canadian sitting out 2020 and simply collecting his Arrow paycheck.

"What's to stop him is the race driver within him. You want to drive, you want to prove, you want to win the Indy 500, you still got boxes to check," Schmidt said. "And so I have no doubt that he and his team are burning up the phone lines and talking with everybody out there, in any series, but primarily IndyCar. He's still young, he still wants to win races, so I think that's what's to stop him from (sitting out)."

McLaren had planned to be a full-time two-car IndyCar team in 2020 but scaled back its plans when it failed to qualify Fernando Alonso for the Indy 500. It has instead partnered with Schmidt and is overhauling the organization with aa clear emphasis on youth. McLaren is doing the same with its F1 lineup.

Schmidt is the winningest Indy Lights team in history with seven championships and has also given seats to reigning Indy 500 winner Simon Pagenaud, as well as Robert Wickens in 2018 when he moved from touring cars to Indy cars. Wickens suffered a spinal cord injury in a crash at Pocono late in his rookie season and although he vows to race again, he's currently in a wheelchair. He and Hinchcliffe are very good friends who grew up racing together in Canada.

Schmidt said Wickens will remain with the team.

"I think Robert continues to inspire and motivate and just amaze everybody on a daily basis," Schmidt said. "Because he's continuing the program, he's continuing to improve, he is a part of the team as a driver coaching consultant and will continue. ... he's got a major focus on his rehabilitation and he's hell-bent on driving again and I wouldn't bet against him."

Askew, an American who turns 23 in December, won seven races while winning the title this season driving for Andretti Autosport. The Indy Lights title comes with a bonus that pays for the champion to race in at least three IndyCar events, including the Indianapolis 500.

"It's a dream come true to be joining Arrow McLaren SP for my first year in IndyCar," said Askew. "The new team brings together three great partners and it's an honor to be representing them in this new chapter for the team and for my career."

O'Ward, a nine-time Lights winner his championship season, had planned to drive alongside Colton Herta last season at Harding Steinbrenner Racing but bailed right before the season amid concerns about team funding. He landed a few races with Carlin, failed to qualify for the Indy 500 and then left to join Red Bull's program. The Mexican racer said he was pleased to return to IndyCar.

"I've had some great opportunities over the last year, but this is by far the greatest thing that could possibly happen for my career," O'Ward said. "I had a taste of IndyCar earlier this year and cannot wait to represent Arrow McLaren SP in the best way possible for a full season in 2020."