Larson wins 2nd NASCAR All-Star race, this one in Texas 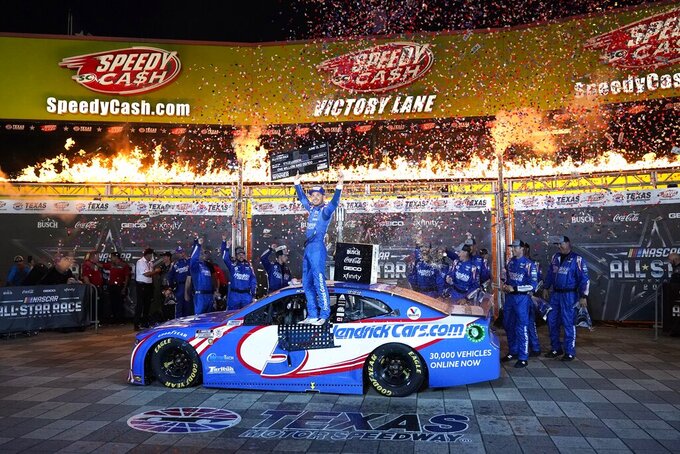 FORT WORTH, Texas (AP) — Kyle Larson was back in the NASCAR All-Star race, and got another $1 million by winning it again.

Larson held off a hard-charging Brad Keselowski during the final 10-lap shootout at Texas on Sunday night, after a slippery three-wide pass for the lead, and pushed Hendrick Motorsports to its second consecutive win, and 10th overall, in the annual non-points race with a seven-figure prize.

Defending All-Star winner and reigning Cup champion Chase Elliott, who started the sixth and final segment of the 100-lap race out front, didn't stay there long.

Larson pushed his teammate, then got in front on the outside through the fourth turn. They were three-wide before Keselowski pulled ahead briefly at the line, then Larson got ahead to stay for the last eight laps.

"That last restart worked out exactly how I needed it to. I wanted Chase to not get a good run down the back,” Larson said.

“Thankfully, I think (Keselowski) got to his inside, and I just shoved him down the back and he probably thought I was going to just follow him and I was like, there’s got to be enough grip where we’d be running for one corner,” he said. “It was a little slick up there but I was able to get it and hold him off from there. I can’t believe it.”

Larson said he had nearly all four tires in a groove above where they had been running laps. He had decided earlier that he'd go for it if given the chance.

Crew chief Cliff Daniels said he didn’t even think there was a lane up there, “and he put it up there, and it stuck.”

Larson has gone to Victory Lane three weekends in a row, and four times overall this season.

Keselowski said running second to Hendrick cars these days is somewhat of an accomplishment.

“They’re just stupid fast, and I had him off of Turn 4 but they just have so much speed,” Keselowski said. “He just motored right on back by me, like damn.”

Larson was with Chip Ganassi Racing when he won the 2019 All-Star race. He missed last year's big event at Bristol while serving a six-month suspension after using a racial slur during a livestream while in a virtual race during the pandemic. That nearly cost him his career, but Rick Hendrick gave him an opportunity this season to get back into the Cup Series.

Second in points with 10 races to go before the playoffs, Larson now only the eighth driver to be a two-time All-Star race winner.

Hendrick drivers Elliott, Byron and Larson started the final segment 1-2-3 — with Penske drivers Ryan Blaney, Keselowski and Joey Logano 4-6. Elliott had moved from third to first during the 30-lap fifth segment that included a required four-tire stop and $100,000 prize for his crew that had the fastest stop.

“Kyle got to my outside and that was the end of it, really. Just got beat," Elliott said.

Byron won the fourth segment, and had the lowest cumulative finish through the first four 15-lap segments. Larson, Blaney and Bowman, another Hendrick driver, finished in front for the first three segments.

On a hot night deep in the heart of Texas, drivers emerged through the saloon doors on a huge facade during prerace introductions while their cars were rolled through a corral gate. Drivers did their warmup laps while rocker Sammy Hagar performed “I Can’t Drive 55” from the stands, finishing the song right at the green flag.

Texas is the third different track in three years for the All-Star race. Charlotte Motor Speedway hosted it 34 of the first 35 years before a move out of North Carolina last summer because of COVID-19 restrictions.

The All-Star race at Texas served as a sendoff and full-circle finish for old-school NASCAR promotor Eddie Gossage, the Texas Motor Speedway president working his last day for Speedway Motorsports.

Gossage, now 62, had considering stepping down for at least two years. He was chosen by Speedway Motorsports founder Bruton Smith to oversee the 1,500-acre complex since its groundbreaking in 1995, two years before the first Cup race at the track that included a big crash in the first turn of the first lap.

He was a young public relations director at Charlotte in 1992 when, during a news conference to promote NASCAR’s first nighttime All-Star race, one of his stunts literally set Smith’s hair on fire. When Smith threw the giant light switch rigged by Gossage to highlight the Charlotte speedway’s new lighting system, sparks flew.

Three decades after he thought he was headed for the unemployment line, Gossage is going out on his own terms. He planned to spend Monday at the pool with his three grandchildren.