IndyCar's DeFrancesco out to change narrative after crash 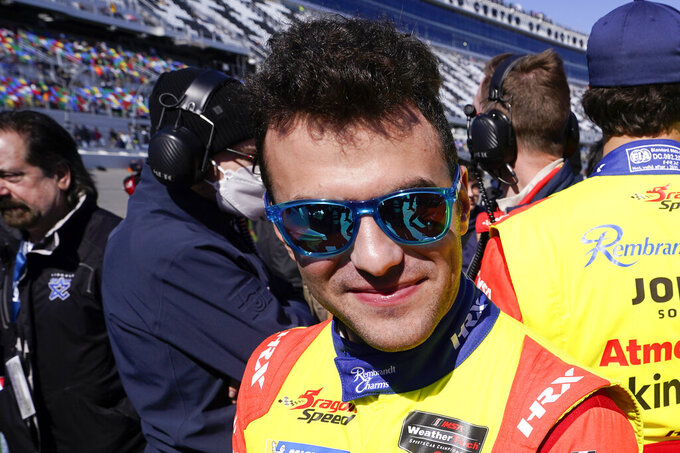 FILE - Devlin Defrancesco stands on pit road before the start of the Rolex 24-hour auto race at Daytona International Speedway, Saturday, Jan. 29, 2022, in Daytona Beach, Fla. DeFrancesco made a mistake at Texas Motor Speedway, no ifs, ands or buts, he knows he caused the three-car crash that also wiped out veterans Helio Castroneves and Graham Rahal. But the rookie insists he's not a spoiled rich kid and is heavily invested in proving himself as an IndyCar driver. (AP Photo/John Raoux, File)

Devlin DeFrancesco made a mistake at Texas Motor Speedway, no ifs, ands or buts about that, and he takes full blame for the three-car crash that also wiped out veterans Helio Castroneves and Graham Rahal.

The other two incidents he has been blamed for? Well, DeFrancesco has his own opinions on any role he played in race-ending crashes for Takuma Sato and Kyle Kirkwood. Blame doesn't really matter at this point, though: his IndyCar debut on an oval was marred by three separate incidents.

Mistakes and overaggressive driving can be bad for a reputation, particularly for a rookie trying to change the narrative surrounding his IndyCar arrival.

“People think I am just this rich kid in Miami that's going racing and that's just not the case,” DeFrancesco told The Associated Press. “I worked my ass off to make this happen, from a physical side, from a mental standpoint, anything that could get me better. That's all I'm focused on right now.”

DeFrancesco is in his first season at the top level of American open-wheel racing, driving for Andretti Autosport in a Honda fielded in partnership with George and Julia Steinbrenner. He landed the promotion after one season in Indy Lights, where DeFrancesco earned a pair of podium finishes but was winless in 20 races. He finished sixth in the standings, far behind then-Andretti teammate Kirkwood and runner-up David Malukas.

Kirkwood and Malukas combined for 17 victories and both also moved up to IndyCar this season. But it was DeFrancesco who landed a seat with Andretti, one of the top teams in IndyCar. Kirkwood had to leave the organization to find a job with A.J. Foyt Racing. Malukas drives for Dale Coyne Racing.

Giving a seat to DeFrancesco over Kirkwood, a winner at every level of IndyCar's ladder system, raised eyebrows but was staunchly defended by Michael Andretti. The team owner has insisted that DeFrancesco rates highly on the Andretti talent board and was faster than both Kirkwood and Malukas in initial IndyCar testing.

The 22-year-old dual citizen of Canada and Italy comes from a wealthy family and his father, entrepreneur Andy DeFrancesco, has funded much of his son's career. Alleging that's the only reason DeFrancesco has his seat is unfair, the driver said, and he has shown talent: DeFrancesco was largely overlooked when fellow IndyCar drivers Colton Herta and Pato O'Ward teamed in January to win their class at the Rolex 24 at Daytona; it was DeFrancesco who turned the fastest lap of the race in that car.

“A lot of people think that I don't deserve to be here, it's no secret, everyone reads social media. My phone vibrates quite a lot when all the notifications come up," DeFrancesco said. “But at the end of the day, I use it as fuel.”

He also puts the work in off the track, which is partly why he chose to live in Miami when he returned from racing in the F3 Series in Europe at the end of 2020.

“Seven days a week I'm training for this one purpose — to do well in IndyCar racing,” DeFrancesco said. “I eat, sleep and breathe this. I'm not a party person. Miami is a good place for all the training and the boxing and the biking that I do, and I go karting three days a week.”

DeFrancesco said he makes the hourlong drive to Homestead-Miami Speedway three times a week to hone his craft, and spends most evenings on his simulator learning everything he can about both the Indy car and the tracks on this year's schedule. Prior to Texas on Sunday, the only other oval he'd ever raced was at Gateway outside St. Louis.

So, yes, he made a mistake when he tried to go inside for a risky three-wide move that ended with three crashed cars. He apologized after to both Castroneves and Rahal, and both went easy on DeFrancesco after the accident.

“As I said to Devlin, I think he's got a bright future,” Rahal said. “He'll learn from these mistakes.”

DeFrancesco had a follow-up chat with four-time Indianapolis 500 winner Castroneves to understand what he did wrong and “it's just not something I will do again,” he vowed.

In the opener on the street course in St. Petersburg, DeFrancesco finished 22nd in the 26-car field but he was the last car on the lead lap and didn't move out of the way as leaders Scott McLaughlin and Alex Palou closed in on him while racing for the victory.

McLaughlin held off Palou for the win — Palou and DeFrancesco are both Honda drivers while McLaughlin drives a Chevrolet — but DeFrancesco said he was running his race. His team radioed for him to simply stay out of the leaders' way and keep going, he said, so he did.

He's no different than any other driver in that he has partners to keep happy. Though funding does come through his father, he and the Steinbrenners have secured outside sponsorship. DeFrancesco pointed specifically to a deal with PowerTap, brought to Andretti by the driver.

He isn't letting Texas shake his confidence and is determined to show his talent.

“I spoke to a lot of people who have won a hell of a lot of races on ovals to get their insight, and I am going to race hard and I'm going to race aggressively,” DeFrancesco said. “It's no secret I made a mistake, and it's a mistake I won't make again, and at the end of the day the only way to change people's minds is when the 29 crew gets a good result. I think it's coming.”