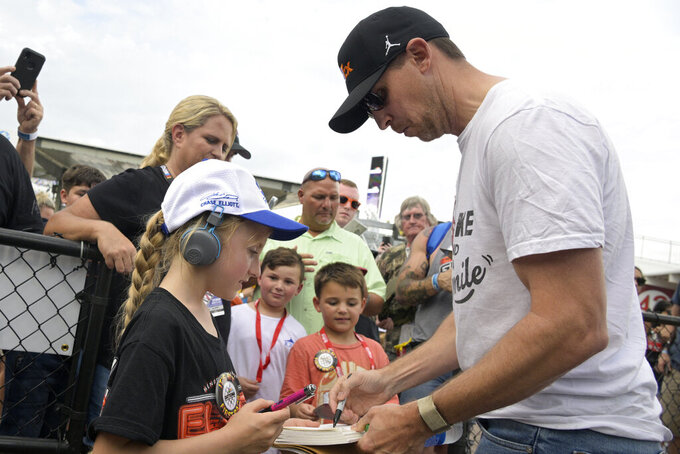 CHARLOTTE, N.C. (AP) — Denny Hamlin said Kurt Busch is under no pressure to hurry up his recovery from a concussion and that 23XI Racing is not pushing at this time to get Tyler Reddick in its cars a year early.

Richard Childress Racing had a full-throttle response to Reddick's planned move to 23XI, the Toyota team owned by Hamlin and Michael Jordan. Childress, blindsided by Reddick and furious, steadied his organization this week by snatching Kyle Busch, the crown jewel of Toyota's fleet.

Not only did Childress sign the free agent of the decade, but he signed him to drive the No. 8 Chevrolet — Reddick's car.

Reddick, it seems, can drive some other Chevrolet that doesn't yet exist as he rides out the final year of his RCR contract. Reddick told Childress in July he was moving to 23XI Racing in 2024.

Hamlin on Thursday applauded Childress' recovery in landing Busch, the Cup Series' only active multiple champion and winningest Toyota driver in all three NASCAR national series. Busch and Hamlin have been teammates at Joe Gibbs Racing since Busch moved there in 2008.

“Our announcement with Reddick, if you want me to take this from a fan perspective, it would be that RCR was caught off guard by it, understandably so, and this was their answer to that," Hamlin said.

“More than likely they got together and said, ‘Well how are we going to respond?’ Well, the way they responded was to get a 60-time winner and two-time champion to fill that seat. They probably got with their manufacturers and said, ‘How can we make this happen?’ and they responded, and I think they responded well."

The problem is that Childress seems determined to hold Reddick through the end of his 2023 deal, only now he's moving him to a third car. Childress said he'd get a charter for the third Chevrolet but didn't say who was selling, and the buying price is north of $20 million right now.

23XI wasn't in a rush to get Reddick in the organization because Kurt Busch is under contract through 2023, and Hamlin said there's even an option on Busch for 2024. But Busch has been sidelined since July with a concussion and there's been speculation the 44-year-old champion will retire.

Hamlin said 23XI still plans for Reddick to join the organization in 2024, and there is no pressure on Busch to get back in his car. Bubba Wallace is currently driving Busch's No. 45 Toyota and won last week at Kansas; Ty Gibbs is in Wallace's No. 23 Toyota.

“We still feel like Kurt is going to run next year, if he doesn't, we've already got contingency plans for the 45 car,” he said. "If (Reddick) was pushed to the side, I think we would take him. But I don't know that we need to get into pushing to get him early.

“Tyler has really said, and I believe it, that he wants to live out his contract at RCR. Mostly he wanted to do it for his team and his guys. With him being taken out of the (No.) 8 car, I don't know if that changes, but I know Tyler wanted to end what he started there.”

The Series next races Saturday night at Bristol Motor Speedway in Tennessee in the first elimination race of the playoffs. Hamlin is the FanDuel favorite to win the race, while Kyle Busch picked up his only Cup win of the year at Bristol in the spring when the concrete surface was covered in dirt.

Four drivers will be cut from the 16-driver field after Bristol, and Kyle Busch is below the cutline at 13th in the standings. Also in danger of elimination are Austin Dillon, Chase Briscoe and Kevin Harvick.