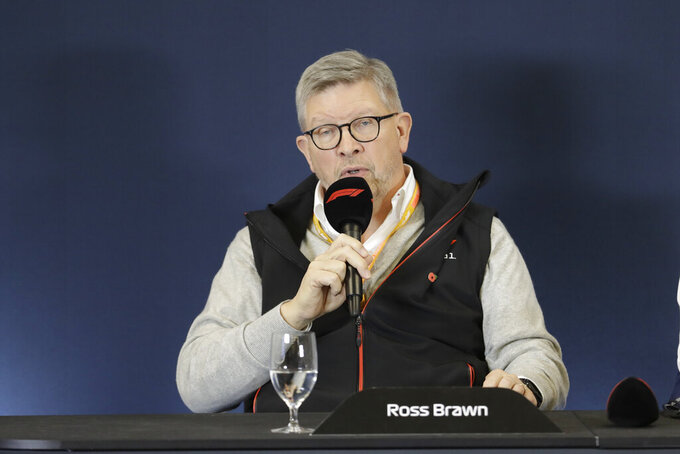 Ross Brawn speaks during a news conference at the Formula One U.S. Grand Prix auto race at the Circuit of the Americas, Thursday, Oct. 31, 2019, in Austin, Texas. (AP Photo/Darron Cummings)

Formula One hopes it has found the formula to close the gap between teams fighting for championships and the cars bringing up the rear of the grid to create better and more compelling racing.

Series officials unveiled their long-awaited rules for 2021 and beyond Thursday at the U.S. Grand Prix, with Formula One chief executive Chase Carey insisting the changes "respect the DNA" of the open-wheel series while improving its future,

"The goal has always been to improve the competition and action on the track," Carey said. "We will have cars that are better able to battle on the track."

Formula One has been dominated by Mercedes since the move to the hybrid engine in 2014 as the team has won six consecutive constructor's championships. Mercedes driver Lewis Hamilton can clinch the team's sixth consecutive driver's championship Sunday.

The only teams even challenging Mercedes on the podium have been Ferrari and Red Bull.

While technical regulations will create more standard parts and make the cars slightly heavier and slower, the biggest change is likely to be the new limit on what teams can spend. While the budgets of the biggest teams can push close to $500 million, from 2021 and on teams will be limited to $175 million spent for on-track performance

Those figures won't include expenses for things such as marketing, driver contracts and the three highest salaries on the team. But teams that violate the racing budget cap could face penalties, including losing a championship.

Putting a spending cap on F1 teams has been one of the biggest sticking points for years. But each year gets more expensive and the big teams finally came to the table and agreed something needed to be done, said Ross Brawn, F1's managing director.

"Budgets have been escalating," Brawn said. "F1 is almost a victim of its own success ... All of the big teams wanted cost control. They needed it. They needed saving from themselves."

F1 hopes that by closing the spending gaps, it will close the racing gap as well. Previous efforts at spending limits have been "gentlemen's agreements" that have been largely ignored, Brawn said.

"We've tried for these in the past. There's not many gentlemen in the paddock," he said.

Expanding the season could strain those budgets. Under the new rules, the F1 schedule could expand from its current 21 races to 25. Vietnam has been added as a race in 2020 and F1 is currently making plans to add a Miami Grand Prix in 2021.

"We'll add races only if we think it really adds to the sport," Carey said.

Technical changes to the heavier car include tweaks to aerodynamics and a bigger wheel size, and a speed reduction of up to 3 seconds per lap is expected. That would put them closer to the speeds of the 2016 season.

Formula One will keep the current hybrid engine system. Engine manufacturers that sell to other teams, such as Mercedes and Ferrari, will have to provide their customers with power units equal to the ones they use in their own cars.

Mercedes driver Lewis Hamilton didn't like that the cars would be heavier, but said he's looking forward to being a "pioneer" in the next chapter of Formula One.

And he strongly suggested it will be with Mercedes, where's he won four of his five championships and is under contract through 2020.

"I love a challenge. This team has shown they are better prepared and in best position to react to changes. It's going to be an interesting time. I'm planning to be here. Sometime next year, my mindset will to switch into 2021 and wanting to be a pioneer in that era," Hamilton said.

Racing Point driver Lance Stroll said he hoped the changes deliver the desired track results. Racing Point sits seventh in the current team standings and regularly gets lapped by Mercedes, Ferrari and Red Bull as it fights to be the first in the middle.

"It's great to fight for 'best of the rest,'" Stroll said. "But there's no reward for that .... Closer racing is the priority."