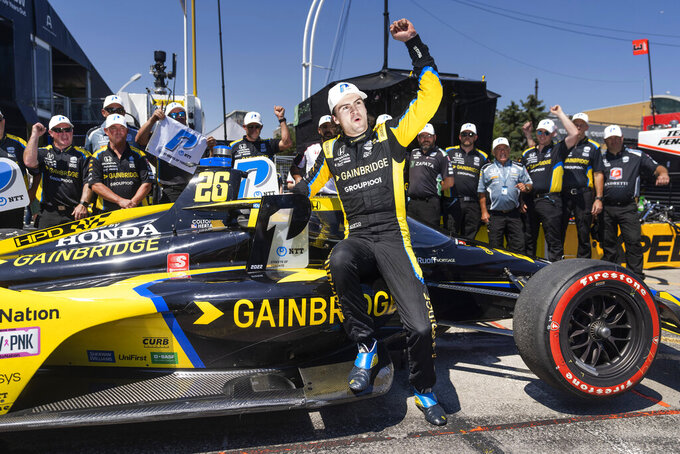 Colton Herta's name continues to spin throughout the Formula One paddock and did so again Saturday in a debate on the American's ability to obtain the Super License required to compete in the global series.

The 22-year-old Californian and IndyCar star frequently has been mentioned as a candidate for a seat next season with AlphaTauri. A sticking point continues to be Herta's lack of a Super License and speculation that F1's governing body may consider granting Herta an exemption.

That idea received pushback from team principals at the Dutch Grand Prix.

“You have to keep in mind that when we made the decision about the Super License and the points, it was to protect F1 and the drivers, to avoid having 10 drivers coming in F1 with big budgets and no results in the past and taking 50% of the grid," Alfa Romeo team principal Fred Vasseur said Saturday. “We did it on purpose. And I think it was a good decision."

Drivers need to accumulate 40 points to obtain a Super License based on their best three performances over the previous four seasons. Herta is expected to have just 32 points ahead of 2023, and although he can gain points by participating in F1 practice sessions, he doesn't currently have any sessions scheduled this year even though he's got a testing contract with McLaren.

Either way, he's not expected to hit the 40-point mark and there's debate on whether the International Automobile Federation (FIA) could apply force majeure to grant Herta a Super License.

Vasseur has more information on Herta's status than others because Michael Andretti attempted to purchase Alfa last season and put Herta in one of the seats.

“We had discussions last year with Andretti. It’s not a secret. Herta was on the table, and he was not eligible for a Super License at this stage," Vasseur said.

At issue is that the FIA does not govern IndyCar and thus doesn't rate it as highly as other global series — making it more difficult for IndyCar drivers to earn a Super License. The IndyCar grid currently boasts former F1 drivers Romain Grosjean, Marcus Ericsson and Alexander Rossi, whose 2015 season marked the last time an American was on the F1 grid.

Callum Ilott and Christian Lundgaard, both fighting for rookie of the year, came from the European junior ranks and Ilott was in the Ferrari pipeline.

Haas boss Guenther Steiner said he was not part of the process that designed the current rules but would be willing to listen to proposals on overhauling the licensing system.

“I don’t want to be sitting here and saying, ‘Oh, an IndyCar race, we know it’s as good as this.’ You cannot compare it,” Steiner said. “If we want to change the rule, let’s discuss it, you know, and then fix it for the future if you think it’s wrong. But there needs to be an agreement between the stakeholders in it.”

Steiner, who also said the team remains undecided on if it will re-sign Mick Schumacher, noted that the lack of Super License has kept Herta off of Haas' list of prospects. The Haas team is owned by American businessman Gene Haas and run partly out of its North Carolina campus shared with its NASCAR team.

McLaren team principal Andreas Seidl worked with Herta in July in a two-day test in Portugal in which Herta impressed in his preparation and on-track performance. It was that test that perhaps raised the level of interest in bringing him to F1, and Seidl said McLaren was open to adjusting the licensing system.

McLaren currently runs an IndyCar program that will expand to three teams next year.

“I think the IndyCar championship is a high quality, very competitive championship with top drivers and therefore I think there’s no reason why we shouldn’t make sure that competitive drivers over there cannot switch to Formula One,” Seidl said. "Absolutely open for some flexibility there in handing a guy like Colton the Super License, because at the end of it, what he has shown so far in his racing career, I have no doubt that he is absolutely able to compete in F1.”