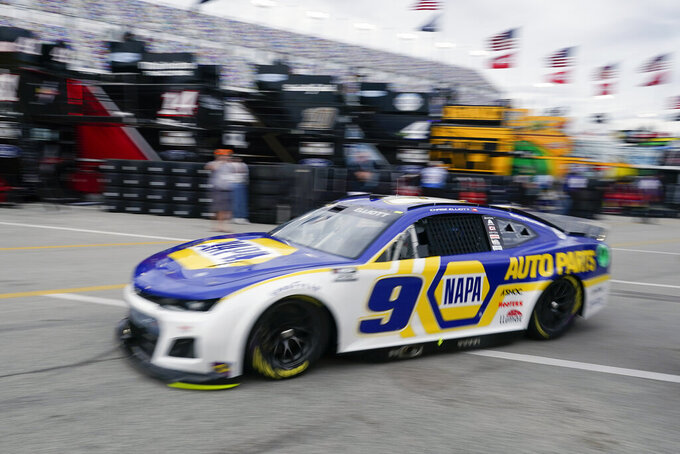 McDowell opened the first Daytona 500 practice session with a top speed of 192.736 mph, the first time NASCAR showed off its new car at the track ahead of Sunday’s sold-out race.

“It's exciting and it’s fun to come back as the Daytona 500 champion,” McDowell said. “Right now, we currently still are until the race happens. Hopefully, we'll be the defending (winner). In this moment leading up to it, it's a lot of fun.”

Ford was just getting warmed up for the second session, the nearly two hours of track time giving drivers a chance to shake down the “Next Gen” car debuting this season. Team Penske driver Ryan Blaney hit 192.588 to lead a top-10 sweep in the second practice for Ford. The manufacturer scored 11 of the 12 spots overall in the second session.

The manufacturers largely stayed bunched together on the track: Chevrolet went 13 to 22 in the second session and Toyotas were sprinkled over the next 10 spots.

NASCAR drivers got previous looks at the revamped car during test sessions and again at the exhibition Clash race inside Los Angeles Memorial Coliseum just over a week ago. NASCAR engineers, in cooperation with teams, spent years developing a car that could level the playing field to some degree.

NASCAR moved its traditional season-kickoff race from Daytona to a temporary oval in California. The event, which included a mid-race Ice Cube concert, was considered a major success among fans and around NASCAR.

NASCAR hopes to keep the momentum rolling into Sunday. It’s off to a promising start: Daytona is back to full capacity a year after the pandemic limited attendance to roughly 30,000 fans inside the sprawling facility that usually packs more than 100,000. The infield parties weren’t yet underway, but fans were back to their usual habits of chasing stars like Chase Elliott around the garage for autographs.

Country music star Trace Adkins will sing the national anthem, and Pro Football Hall of Fame cornerback Charles Woodson was named grand marshal and will give the command for drivers to start their engines.

The stakes are raised Wednesday night for qualifying.

McDowell started 17th last season for Front Row Motorsports and emerged as the winner for the first time in 357 career Cup starts by zipping past two crashed cars on the final lap.

“I still have the trophy,” he said. “I don't think I have to give it back at the end of the weekend.”

Three-time Daytona 500 champion Denny Hamlin opened the first practice as the 9-1 favorite to win Sunday, according to FanDuel Sportsbook. The odds say it’s a long shot for a repeat champion. McDowell faces 70-1 odds to win.

Greg Biffle, who last raced in the Cup Series in 2016, launched a comeback bid when he hit the track in the No. 44 Chevrolet for NY Racing. NY Racing is a fully minority-owned team owned by Grambling State alum John Cohen.

Biffle was 17th among the 42 cars — only 40 make the field — that turned a lap. He was 36th on just five laps in the second session. At 52, Biffle is the oldest driver trying to make this year's race.

Floyd Mayweather Jr. launched his long-delayed race team with Kaz Grala in the No. 50 Chevrolet — a nod to Mayweather’s 50-0 professional boxing record — and was 41st.

Grala, who has yet to meet Mayweather, is trying to qualify for the race in an open car because the team does not have the charter that guarantees it a spot in the field. Money Team Racing is expected to try and qualify for a handful of races this season.

“I think they’re pretty realistic about what this endeavor is going to involve,” Grala said Tuesday. “We’re not a full-time team. We’re a brand-new upstart. We don’t have technical alliances with anybody.”

Grala only turned five laps in the first session, and some teams kept their laps attempted under double digits because most did not yet have a backup car at Daytona.