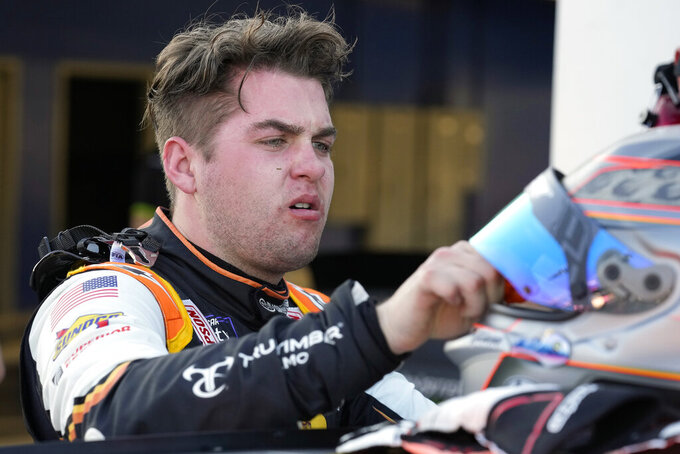 FILE - Noah Gragson takes off his helmet after a NASCAR Xfinity Series auto race practice Friday, Feb. 18, 2022, at Daytona International Speedway in Daytona Beach, Fla. The star Xfinity Series driver for JR Motorsports is in the spotlight again for all the wrong reasons: the poor choices he’s making on track that are slowing Gragson’s career progression. (AP Photo/Chris O'Meara, File)

NASCAR on Wednesday penalized Noah Gragson for a deliberate and dangerous crash he caused in the Xfinity Series race at Road America.

Gragson, who turns 24 later this month, was docked 30 points and fined $35,000 by NASCAR for intentionally crashing into Sage Karam on Saturday at the road course in Wisconsin. NASCAR cited a rule against “intentionally wrecking another vehicle” and “actions by a NASCAR Member that NASCAR finds to be detrimental to stock car racing or NASCAR.”

Gragson's swerve into Karam triggered a frightening multicar crash that was so egregious, Gragson was criticized publicly by Dale Earnhardt Jr. ahead of the penalty announcement. The NASCAR Hall of Famer and co-owner of the JR Motorsports team Gragson has represented since 2019 was surprised NASCAR didn't immediately penalize his driver.

“I was shocked, to be honest with you, when I saw Noah make that decision," Earnhardt said Wednesday morning on SiriusXM NASCAR Radio. “I was just completely shocked and in a bit of a disbelief not only that he made that choice but that he, you know, that it created such an accident and got so many other guys involved. That was tough to watch, really tough.

"I think that NASCAR doesn’t want to over-officiate the races, but I think in some situations there’s some things that do cross over a line. And I felt like that was definitely one of those situations where had I been in the booth directing the race I think I would’ve had to bring Noah to pit road and hold him there for a while.”

NASCAR said it did not immediately issue the penalty after the 13-car crash because the racing Saturday on the road course had been so aggressive that it wanted to speak with Gragson and examine his Chevrolet to ensure he had not suffered a mechanical failure.

“Obviously nothing was wrong with the car and it was clear it was intentional,” NASCAR said in a statement. “Parking the (number) 9 during the event was an option, but we felt that more information was needed before making a decision on any disciplinary measures.”

The points deduction did not drop Gragson in the standings; he has two victories this season.

Kelley Earnhardt Miller, who was initially defiant against calls for Gragson to be punished, said on Twitter the team she co-owns with her brother “understands” the NASCAR penalty.

“Noah is a passionate race car driver, and his actions occurred in the heat of the moment,” she wrote. “Learning how and when to keep emotions in check is all part of the learning experience.”

Gragson lost his temper after he and Karam banged several times shortly after the start of the third stage. Gragson turned right deliberately to hook Karam on the straightaway between Turns 3 and 5, which triggered other crashes.

Karam was immediately critical of the danger Gragson's action caused other drivers, and Gragson was unapologetic for crashing Karam.

“It’s one thing if you’re faster than someone,” Gragson said, “but to throw it off in there and run you off the racetrack in the corner, door you, run you off the track. Finally, after the third time, I’m over it. It’s not the ideal situation for him and his team, but two or three times, I’m done with it.”

Earnhardt on Wednesday said wrecking Karam never should have been an option.

“He needs to take that out of his choices. He cannot be intentionally turning into guys on straightaways. I just hope that he realizes that that really is something that he needs to be careful about going forward," Earnhardt said. "Noah wants to race in the Cup level, he wants to get to the Cup level and we want to help him get there whether he’s driving a Cup car for us one day or someone else.

"When he makes those type of decisions, and this is what I told him, I said: ‘You’re hurting that opportunity. You’re tarnishing, staining your reputation. And that’s the last thing you want to do when you’re trying to get job offers.’ I told him that I could stand behind him through just about anything, but I could not defend that.”

Karam crashed in 2015 while leading an IndyCar race at Pocono Raceway and a piece of broken debris from his car bounced up and struck Justin Wilson's helmet, delivering a fatal blow.

Karam is now trying a mix of both NASCAR and IndyCar and has been unimpressed with Gragson in his time in NASCAR's second-tier series.

“I knew I was faster than Noah, and he didn’t like that a little team was doing that to him,” Karam said. "He can go out there and drive however he wants and it’s not a worry for him. It affects us a lot more than it affects him.”

Karam is entered in Saturday's race at Atlanta Motor Speedway, where he will face Gragson again but said he won't retaliate.

“I’m not going to intentionally drive into somebody or take somebody out,” Karam said. “That’s just not the type of driver I am. Twenty-something years of racing, that’s never happened to me until (Road America). I would say that’s racing, but to me that wasn’t racing.”

He also wasn't sure if Gragson would change. The Las Vegas native has been involved in myriad on-track aggressions throughout his short career.

“In the short time I've been Xfinity racing, I have not heard a lot of great things about Noah and he has not shown a lot of great racing with me on track," Karam said. "I'm not sure Noah can change. This is something that Noah needs to look in the mirror, he needs to look at himself and want to make a change.”