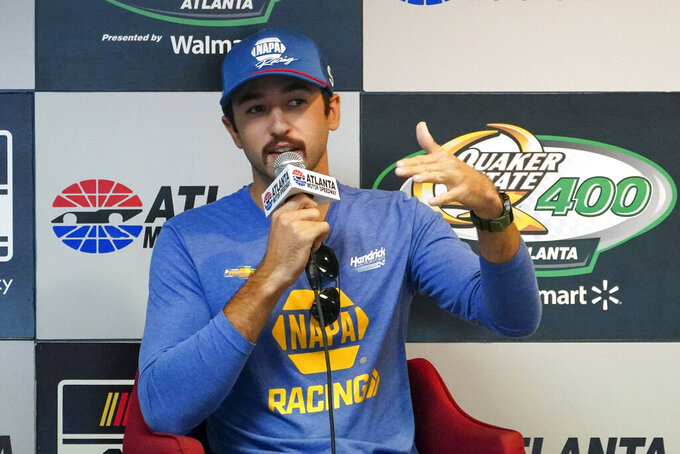 HAMPTON, Ga. (AP) — Chase Elliott has accomplished so much in his young racing career.

A NASCAR championship. Most popular driver awards. Fifteen Cup victories at all types of tracks.

But one thing is missing.

The 26-year-old Dawsonville native returns to Atlanta Motor Speedway on Sunday still looking to take the checkered flag at the place where his father Bill established the family's fame and young Chase learned the ropes.

“It's always nice to race close to home,” Elliott said. “It's nice to go home at night, sleep in my own bed.”

Even better than a restful night would be the chance to celebrate in victory lane in front of a home-state crowd.

“I would love to win here,” Elliott said. “It would be very meaningful to be able to check that box.”

The 2020 series champion already has a pair of wins this season and leads the point standings heading into the second race of the season on Atlanta's 1.54-mile trioval.

In a wild year that produced 13 different winners over the first half of the 36-race marathon, and has seemingly made it impossible to sustain any level of success, Elliott has been solid just about every time he starts the engine.

In addition to wins at Dover and Nashville, he was runner-up to Tyler Reddick last week at Road America to go along with nine other top-10 finishes.

“Chase Elliott has been that consistent rock,” Kurt Busch said Saturday, when heavy storms washed out qualifying for the Quaker State 400. “He's that guy who might've had trouble early in the race and you're like, ‘Where did he come from? He’s fourth.' He's doing the job that champions do, and he's doing it better than other champions right now."

But Atlanta Motor Speedway has always been a bit of a conundrum for Elliott, whose father won five times at the track — albeit in an era before several renovations produced an entirely different layout.

Chase has come up short in eight Cup races at the high-speed track, managing just a single top-five showing. He's 0-for-12 if you throw in his Xfinity and Truck series appearances.

“We've had one really good run, I would say, and the rest are just kind of mediocre,” Elliott said. “I would love to check that box. It would be super special to me."

Elliott's No. 9 Chevrolet will lead the field at the start of Sunday's 260-lap race. As the series leader, he claimed the pole position when qualifying was washed out.

The forecast for race day was iffy, as well, with a significant chance of thunderstorms throughout the afternoon.

While the Cup drivers are in Atlanta this weekend, they faced plenty of questions about a different city and a race that doesn't officially exist.

The Athletic reported that Chicago officials have cleared the way for NASCAR to hold a historic street race beginning in 2023 as part of a three-year deal.

Some drivers called it another extraordinary chance to expand the sport's fan base. Others said a street layout for bulky Cup cars would present little chance for passing.

“I'm very skeptical,” William Byron said. “I drove it (virtually) on iRacing, and if it's anything like that, it's very, very narrow."

But Kurt Busch said it's a chance to create another unique racing experience like this year's season-opening Clash held at Los Angeles Memorial Coliseum.

“The excitement, the different value and the different feel, it would be off the charts," he said. "It's important for our sport to do that on certain weekends.”

Busch's younger brother Kyle questioned the wisdom of NASCAR committing to three years of street racing in Chicago. He noted that crowds were much lower for last week's second Cup appearance at Road America, as opposed to the inaugural race in 2021.

“As we've seen, we can make a really good splash the first time around, then year two, year three, it's dead," Kyle Busch said. "Try it once and see how it goes.”

“Continuing to gain road courses and eliminating ovals is not NASCAR,” he grumbled.

After winning Atlanta's first race of the season, and then taking another checkered flag at Martinsville, Byron appeared headed for a huge season.

Instead, the past 10 races have been quite a struggle for the driver of the No. 24 Hendrick Motorsports machine.

Byron has only one top-10 finish in that span, with an average finish of 19.5.

“We're certainly looking forward to turning it around," he said. “We have a top-five car.”

Despite some hedging in recent weeks, Aric Almirola insisted this is his final season as a full-time Cup driver.

The 38-year-old Almirola surprisingly announced his retirement from the No. 10 Stewart Haas Racing car before the start of the season, saying he wanted to spend more time with his family.

In the meantime, he's relishing things he once took for granted.

“The reality is we have one of the coolest jobs in the world,” Almirola said. "Knowing it's the end, I'm just embracing it."

Asked if walking through the garage was any different coming off the first Cup victory of his career, Reddick said, ““Yeah, I wore a rain jacket, because it’s really pouring out there. That's the biggest difference.”

Elliott and Hendrick Motorsports teammate Kyle Larson are 5-1 favorites to win, according to FanDuel Sportsbook.