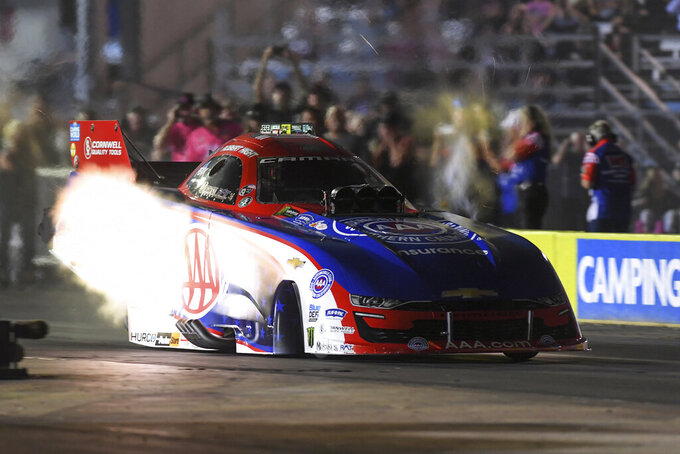 In this photo provided by the NHRA, Robert Hight takes part in Funny Car qualifying Friday, Oct. 8, 2021, at the Texas NHRA FallNationals drag races at Texas Motorplex in Ennis, Texas. (NHRA via AP)

“We’re pretty excited,” Hight said. “Having four qualifying runs is huge and we were low E.T. three of the four runs and that gives you a lot of confidence heading into Sunday. That was a great run to close the day and you’re going to see more of the same tomorrow. This is the Countdown and we’ve dug ourselves a hole. We’ve got to win from here on out if we want to have a chance to win a fourth championship.”

Brittany Force took the No. 1 spot in Top Fuel, Greg Anderson was the fastest in Pro Stock and Steve Johnson topped the Pro Stock Motorcycle field — all with runs Friday — in the fourth race in the Countdown to the Championship playoffs.