Ganassi adds another Kiwi in Armstrong to IndyCar lineup 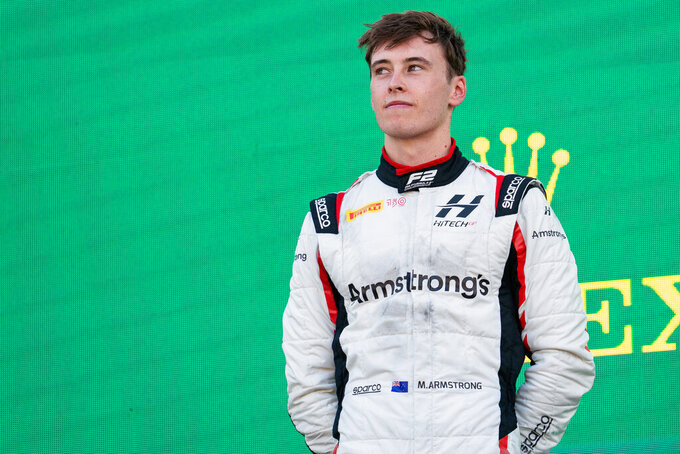 In this photo provided by James Gasperotti, New Zealand driver Marcus Armstrong is shown at the Enzo and Dino Ferrari racetrack, in Imola, Italy, April 21, 2022. Chip Ganassi Racing has signed New Zealand driver Marcus Armstrong to join its IndyCar lineup next season. Armstrong spent the last three seasons in Formula One feeder series F2 and will drive the No. 11 for Ganassi. (James Gasperotti via AP) 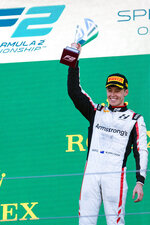 Marcus Armstrong was a Scott Dixon fan his entire life and when he was 8, the aspiring young racer asked his fellow New Zealander to autograph a helmet visor that he hung on his bedroom wall.

Next year, Armstrong will be Dixon's teammate.

Armstrong on Friday was named the fourth IndyCar driver in the Chip Ganassi Racing lineup and will pilot the No. 11 next season on road and street courses. A driver for the five oval races on the 17-race schedule will be named later.

The No. 11 is essentially the No. 48 that seven-time NASCAR champion Jimmie Johnson drove the last two seasons, with Chip Ganassi making the change to run four cars numbered in sequential order. Indianapolis 500 winner Marcus Ericsson drives the No. 8, six-time champion Dixon drives the No. 9, and 2020 IndyCar champion Alex Palou drives the No. 10.

So just who is the second Kiwi in the Ganassi lineup? A 22-year-old who spent the past three seasons in Formula One feeder series F2, a Ferrari development driver in 2021, and former roommate of Callum Illot and former teammate of Christian Lundgaard — both of whom just completed their rookie IndyCar seasons.

“I've always been attracted to the IndyCar championship because its one of those championships that's been really well televised in New Zealand since I was young, mainly because of Scott and his success,” Armstrong told The Associated Press. “As time progressed, as I got closer to F1 and single-seaters, the attraction to IndyCar grew just because of how competitive the championship is — I like to challenge myself and the level of competition in IndyCar is remarkably high.”

Armstrong, from Christchurch, New Zealand, was set to travel from his current home in London to Indianapolis this weekend to meet his new team. He won't need an introduction to Dixon, the 42-year-old considered the best IndyCar driver of his generation and Armstrong's unequivocal childhood hero.

Dixon last season won his 53rd career race to pass Mario Andretti for second on the all-time list. Dixon has driven for Ganassi in all but 23 of his 345 career starts.

“For a long time I've been a Scott Dixon fan. I don't want to make him cringe with our age difference,” Armstrong told the AP.

Despite the two decades age difference between them, Armstrong never considered someday racing with Dixon a fantasy.

He convinced his father after winning five national karting championships to allow him to leave New Zealand for Italy at age 14, where he moved by himself to purse a racing career. Armstrong said as soon as he'd received parental permission, he'd never look back.

Armstrong was in Formula 4 two years after his move to Italy and won that title in his first season. He won four races and four poles in F3 in the 2018 and 2019 seasons, then collected four wins and eight podiums in three seasons of F2.

“Maybe it's a strength, or maybe it's a weakness, but I always thought I was capable of doing great in the sport,” Armstrong told the AP. "I think you probably have to succeed in the sport, you need to believe in yourself. I always pictured myself being in IndyCar.

“As Scott's teammate? I can't specifically say I saw that. It's an extraordinary chain of events.”

Armstrong becomes just the latest driver to leave Europe, where F1 is the pinnacle but has only 20 seats each year. Alexander Rossi began the trend in 2016 when the American left F1 and won the Indianapolis 500 as a rookie. He's been followed by Ericsson, last season's Indy 500 winner, Romain Grosjean, Illot, Lundgaard, and on Thursday three-time W Series champion and Williams F1 reserve driver Jamie Chadwick was announced as driver for Andretti Autosport in IndyCar's second-tier development series.

Armstrong said he could have remained in F2 for a fourth season, but he'd been watching IndyCar for so long, and after conversations with Illot and Lundgaard, he decided to make the move to what he believes is the most balanced racing series in the world. He tested for Dale Coyne Racing at Sebring in October.

He doesn't know if European racing is done for good, just that he wants to be in IndyCar right now.

“I don't want to think too far into the future, I'm just grateful for this opportunity that is standing right in front of me,” Armstrong said. "I want to perform as well as I can in the near future and just consolidate myself in the fantastic chance that is IndyCar and just do my best.

“I'm not looking at F1 as a landing spot — I am looking at IndyCar, and that's exactly why I am here.”