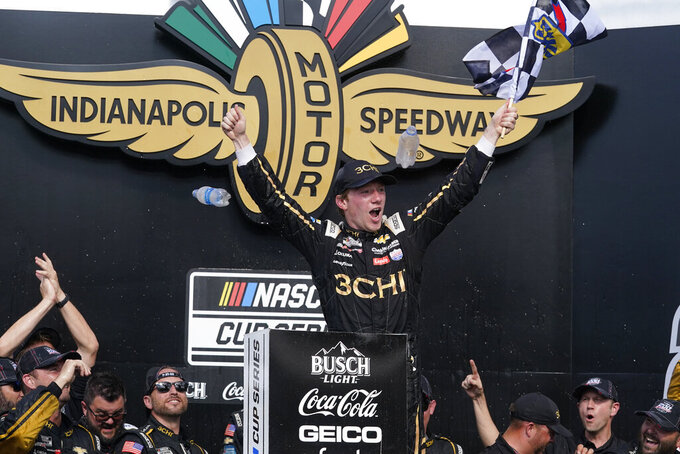 INDIANAPOLIS (AP) — There was no masking Richard Childress' anger when he learned star driver Tyler Reddick was leaving his race team. Reddick's current contract runs through 2023 and he told his boss he was moving on when it expires only 10 days after scoring his first career Cup Series win.

Childress was livid in his initial response, saying the “timing of this announcement could not be any worse,” and his grandson, Reddick's teammate Austin Dillon, was equally unimpressed.

Turns out it isn't affecting Reddick, who picked up his second win in five races on Sunday with a victory on the road course at Indianapolis Motor Speedway. And it isn't hurting the No. 8 team, partly because Childress took a day to calm down, regroup, and deliver a message to the organization.

“After they made their announcement, I thought about it a lot that night, gave it a lot of thought, and it’s more than just about one person. It’s about a team,” Childress said. “Stayed up most of the night thinking about what I should do, how I wanted to handle it. I went in the next day and told the whole team ‘it wasn’t a perfect circumstance the way it went down, but we’re going to give it everything we’ve got this year, and we’ll see where we go next year.’ ”

Make no mistake, though: Childress was adamant Reddick — a driver he's referred to as “the next Cale Yarborough” — will fulfill his contract and drive his car next season.

But for now? Well, any hurt feelings have been pushed aside as Reddick helps RCR contend for the Cup title. His win at Indy made him the first RCR driver since Kevin Harvick in 2013 to win multiple races in a season, and multiple victories for RCR in a season for the first time since 2017.

Crew chief Randall Burnett said the key to finding success in a strained situation was understanding Reddick's decision is “a business deal.”

“We’ve still got a lot of racing left to do with Tyler, and that’s what I told our guys. We’re all professionals. We’ve seen drivers come and go and things move around, and that’s just part of our sport,” Burnett said. “We’ve talked about it as a group, and Richard sat in on some of them and talked with all of us about it.

"The biggest thing we can do is go out and do what we did (at Indy) and that’s put fast cars underneath Tyler and try to win races and show everybody what this team is made of.”

Reddick's second victory solidly locks him into the playoff field for the second time in his three Cup seasons. The two-time Xfinity Series champion said nothing has changed for him since telling RCR he was going to drive for Denny Hamlin and Michael Jordan at 23XI Racing in 2024.

“My commitment level, if anything, probably is a little bit higher,” Reddick said. "I just know that we’ve had time to continue to work on our cars and make them better and grow as a team and go in the right direction, and now it’s like, all right, we have a hard stop. This is the end of the road that we have together.

“For me that puts, I think, a good amount of pressure on me to just keep finding more.”

RCR hasn't won a championship since 1994 with Dale Earnhardt, who won all six of Childress' Cup titles. But the team owner pointed out that RCR nearly won the title in 2013, Harvick's final season before Harvick moved to Stewart-Haas Racing.

Harvick won four races that year and finished third in the final standings.

But RCR hasn't been nearly as competitive since Harvick left. Reddick has been a critical piece in the long rebuild and now he's leaving, too, but Childress seems determined not to allow the organization to slip.