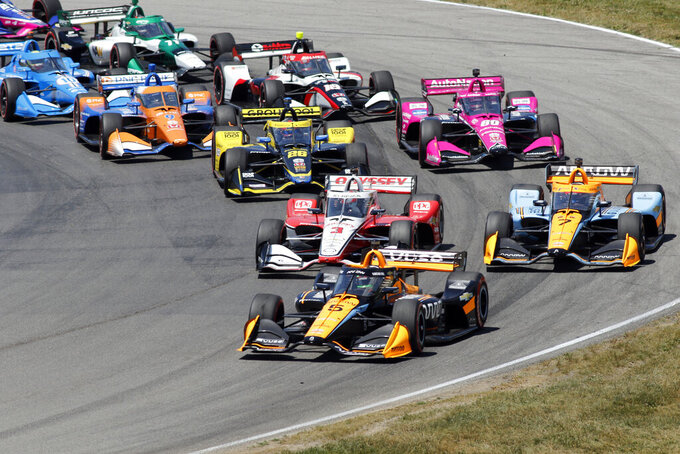 LEXINGTON, Ohio (AP) — Michael Andretti wants Formula One to believe that he should be the team waving the American flag in the world's most popular motorsport series.

The meltdown of his flagship IndyCar team at Mid-Ohio Sports Car Course can be his Netflix audition tape.

Andretti Autosport has been unsteady all season, the first with Romain Grosjean of F1 and “Drive to Survive” fame and last with Alexander Rossi, winner of the 100th running of the Indianapolis 500 and IndyCar's least amused driver.

Grosjean is new to the team — he replaced popular Andretti stalwart Ryan Hunter-Reay — and Andretti needs “The Phoenix” and his star power in the expansive Andretti multi-series lineup.

And Grosjean is legitimately a star. He was a featured driver on F1's behind-the-scenes Netflix docudrama and an entire episode revolves around the near-fatal 2020 fire that ended his F1 career and brought him to the United States to race IndyCar.

And it's on Andretti to manage the situation and prevent his organization from embarrassing itself at a 60-year-old relic of a racetrack located in the middle of Ohio.

Rossi long ago decided this seventh season would be his last with Andretti, the owner who gambled on the Californian when he washed out of F1. He is leaving for Arrow McLaren SP and Andretti already has signed Kyle Kirkwood to replace him.

The smart play for Andretti would have been to squelch any tension on the roster immediately.

After all, F1 is watching.

Andretti has been working overtime trying to persuade F1 to expand its grid for a two-car effort from "Andretti Global." A true American team, he's argued, would bring new sponsorship wealth to a series rapidly growing throughout North America.

Most of the current F1 teams think Andretti is delusional. They don't care about returning the Andretti name to F1 and most are already signing mega-million deals with North American-based companies. At Charlotte Douglas International Airport on Monday, the transportation hub of NASCAR featured F1 driver Lando Norris in an ad for Tumi in the main shopping artery.

Adding two cars to put the Andretti name on the grid is viewed by the majority of F1 teams as nothing but a dilution to their guaranteed earnings.

It's up to Andretti to prove his value to these gatekeepers of the club he so desperately wants to join. And while Mid-Ohio proved his organization packs all the action needed for a full “Drive to Survive” storyline, it couldn't have been the look Andretti wants scrutinized.

It was so ugly that this is how Andretti Autosport summarized Sunday in its postrace news release: “With the drop of the green, drivers worked to advance in the field before a round of incidents amongst teammates cost valuable track positions. The melee brought about high tensions and lowered finishing results.”

Andretti was openly seething as his cars wrecked one another. He had a heated conversation with Rossi's father in the open paddock and then a postrace meeting with his drivers.

When it was over, Grosjean said he still felt that Rossi is “an absolute idiot. Sorry.”

Rossi on Monday declined to elaborate on the situation to The Associated Press. He has made himself clear that he does not believe Grosjean is a good teammate and he will never give an inch to Grosjean on the track.

But he is adamant he still represents Andretti and that his job is still to try to win races.

What did Andretti have to say after the five-alarm Mid-Ohio debrief? He didn't respond to a request for comment Monday from the AP.

It's clear that Grosjean has done himself few favors in his second season of IndyCar. He charmed his way into the series — mere months after the 2020 F1 fire in Bahrain — and upgraded from overperforming with mid-pack Dale Coyne Racing to still searching for his first win in his upgraded Andretti seat.

Grosjean has been involved in multiple on-track incidents since joining Andretti and he very rarely accepts any culpability. After he and Graham Rahal tangled in April at Barber,Rahal spread the word that most the drivers had tired of Grosjean's act.

Next up was nearly a month in the Indianapolis Motor Speedway motorhome lot, where Grosjean prepared for his Indy 500 debut and his teammates were eager participants in the annual pranks among drivers.

It didn't seem personal when Herta and Rossi were part of a crew that ransacked Grosjean's patio furniture and relocated his scooter to the top of the Pagoda. And though Herta seemed mildly annoyed when he discovered his golf cart had been overturned and all its oil drained while he was in a media session, there were no overt signs that Rahal may have been including Grosjean's own teammates in his popularity poll.

“That’s been building all year," McLaughlin said of the Andretti-on-Andretti crimes that occurred behind the leaders all day.

In one sense, Mid-Ohio showed that Andretti has all the juicy drama that has helped F1 expand its North American audience. But the entire display — and apparent months of internal buildup — has an amateurish look that hardly makes a case for F1 to swing open its gates to Andretti.

There's an issue inside the Andretti operation and each day it isn't fixed only hurts Andretti's chances of being taken seriously in F1.